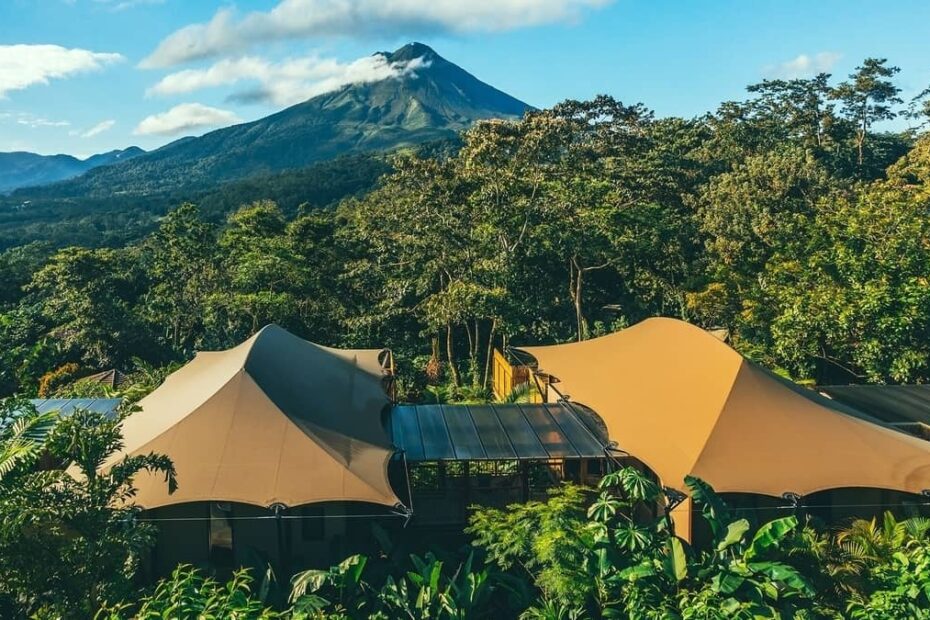 Yesterday, Travel + Leisure Magazine published its World’s Best Awards, including the flagship Top 100 Hotels in the World, with three Costa Rican hotels featured in that list.

Nayara Tented Camp in the Arenal Volcano area comes in at number two – the second-best hotel in the world, while its sister property Nayara Gardens (also in Arenal) is thirty-third. Casa Chameleon, in Santa Teresa on the Nicoya Peninsula is 79th.

Travel + Leisure has been running these awards since 1995, with their readers creating the lists through their own votes. The travel business considers the Travel + Leisure Awards among the most prestigious in the industry.

#TLWorldsBest: Want to vacation at only the best hotels around the world? Check out the list of World’s Best Hotels as chosen by Travel + Leisure readers. https://t.co/iq7gpunSQH

There’s no question these hotels rank among the best in Costa Rica. The Nayara brand winning two spots on the list is particularly commendable.

Since Nayara’s first hotel in Arenal opened in 2008, they’ve been redefining luxury in Costa Rica, according to Richard Bexon, COO of the Namu Travel Group.

“We’ve been sending our clients to Nayara since they were one hotel – the original Arenal Nayara. Even then, they were something special, a redefinition of the boutique, luxury experience that tourists come to Costa Rica for,” says Bexon.

“As a travel agency, it’s been thrilling for us to watch the Nayara brand grow in Costa Rica, from the original hotel – rebranded from Arenal Nayara to Nayara Gardens – to the development of Nayara Springs and then, the icing on the cake, Nayara Tented Camp. Congrats to them for getting two of their hotels in this list.”

The Arenal Volcano area of Costa Rica also features in another of Travel + Leisure’s award categories. The famous Tabacon Resort is one of the Top 5 International Destination Spas in the world.

Costa Rica is the only Central American country to feature in the Top 100 Hotels in the World List this year.

The reasons for this are unclear, but we would surmise it’s got a lot to do with pandemic travel. Costa Rica seems to be the country in the region that’s most successfully managed to make the best out of a bad situation, in terms of both how it markets itself, and how it’s made visiting relatively easy.

But as mentioned, Travel + Leisure has other award categories where the rest of Central America also managed to feature.

In both these categories, Antigua was the only Central American city to rank. This can only provide a much-needed boost for Guatemala as it goes through some very hard times right now.

It’s also worth looking at Central America’s own category, where it’s not competing with the rest of the world.

Costa Rica dominates the Top 10 Resort Hotels in Central America category. All three hotels in the global list fill the top three spots. And then Nayara gets the hat trick by having Nayara Springs in fourth place. The JW Marriott in Guanacaste comes in at number ten. That’s five out of ten spots for Costa Rica.

Belize has four spots in the list with sister hotels Gaïa Riverlodge (in the Mountain Pine Ridge Forest Reserve) and Matachica Resort (Ambergris Caye) at numbers five and six. The Jewel also fills eighth and ninth places with the Blancaneaux Lodge and Copal Tree Lodge.

The final hotel in Central America’s Top Ten is Casa Palopó on Lake Atitlán in Guatemala at number seven.

Getting onto any of these lists is no mean feat. The readers of Travel + Leisure know their travel. So congratulations to all the hotels and cities in Central America who’ve made it into this year’s Travel + Leisure lists. We hope it helps boost tourism and awareness that this beautiful part of the world is open and ready to receive travelers.