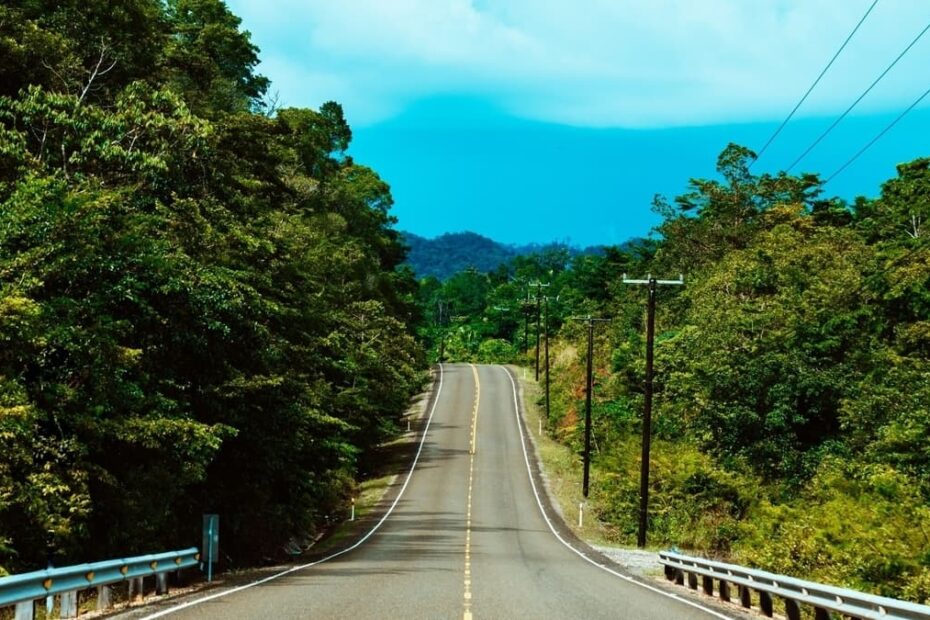 A look at some of our favorite road trips and most scenic drives in Central America… which means some of the most scenic drives anywhere on the planet. This article contains affiliate links, where we make a small commission if you buy anything after clicking, at no cost to you.

In a region blessed with the most beautiful natural scenery in the world, road tripping in Central America is a feast for the eyes.

Forget all the warnings about bad roads, thundering trucks, terrible drivers, and kamikaze bikers. Don’t think about the potholes, sudden switchbacks, and non-existent barriers on mountain roads. All that stuff exists, without doubt, and driving in Central America can be nerve wracking if you’re not used to it.

But put all that aside and open your eyes to the sheer splendor of the countryside you’re passing through. It doesn’t matter if you’re in your own car, on a bus, or on a bike. You won’t experience such natural beauty anywhere else.

Below, we list our five favorite scenic drives in Central America. The only requirement we have is pure natural beauty, nothing else. Let’s drive.

Those in the know rate the Hummingbird Highway in Belize as one of the most beautiful roads on the planet. They’re not wrong. It runs from Belmopan, Belize’s capital, to Dangriga on the coast. It’s only 85 kilometers (53 miles) long, but it packs a lot into that short distance, running through the gorgeous Maya Mountains.

And then there’s the name itself. “Hummingbird Highway” has an exotic, tropical sound which can’t help to stir even the coldest of hearts as they take this route.

Sure, you can drive the Hummingbird Highway in an hour or two. But why rush it?

The route between San Jose, Costa Rica, and the Caribbean coast through the Braulio Carrillo National Park is spectacular, no matter which direction you’re heading.

As you depart San Jose through its northern barrios, the elevation increases. Suburbs become rural villages and rural villages become pure nature. Then you enter the Braulio Carrillo National Park and find yourself in another world. You’re on one of Costa Rica’s busiest highways, but if you parked up and ventured a few hundred meters off road either side, you might find yourself lost in dense, virgin cloud forest.

Then you pass through the Zurqui Tunnel, cut through the mountains, to find yourself on the Caribbean side of the Continental Divide. There’s more pristine cloud forest to experience before the elevation drops to the flatlands of the Caribbean and the temperature skyrockets up.

By far our favorite road in Costa Rica.

This route along El Salvador‘s coast has a feel of California’s Pacific Highway about it, especially the stretch of road between Mizata and El Zonte, where the road switchbacks and twists along clifftops between mountain and ocean.

You’ll drive through tunnels here, emerging into brilliant sunlit vistas of the Pacific Ocean. Make sure you stop at the view points for photos.

The Ruta de las Flores is another one of Central America’s romantically-named stretches of road.

It runs between Sonsonate and Ahuachapan, a stretch of just over 30 kilometers (20 miles) of charming countryside comprising coffee farms and colonial towns enhanced all the way with wildflowers everywhere adding a splash of color.

The idea is to take it easy on this route. Stop in the towns, take a look around. Buy coffee, take a little detour to Juayua, why not?

If you’re looking for a taste of traditional country life in Central America, the Ruta de las Flores is the most beautiful place to start.

No article about scenic routes in Central America would be complete without mentioning the drive to and/or from Lake Atitlan, the jewel of Guatemala.

Known by everyone who’s ever seen it as the most beautiful lake on earth, getting to Atitlan by road is part of the joy.

Doesn’t matter if you’re on the road from Antigua to Panajachel, or Panajachel to Quetzaltenango. Either way, you’ll find winding roads, soaring mountains and volcanoes, and yes, heartstopping views of Lake Atitlan that you’ll never forget. This is roadtripping at its finest.

Maybe even try it from a tuktuk.

I can think of a bunch in Costa Rica alone, like the old route to Limón through Turrialba or the Cerro de la Muerte from Cartago down to Perez Zeledon. And then there’s the route from Puriscal to the Pacific coast, near Parrita.

Nicaragua has the road up to the Laguna de Apoyo and the Panamerican Highway between Esteli and Somoto. Not to mention the amazing little road all around Big Corn Island in the Caribbean. Perfect for finding hidden beaches and bars in your golf cart.

And I’ll never forget the sight of waterfalls cascading down green mountains on the drive from David, Panama to the Pacific coast at Boca Chica.

In short, wherever you go in Central America, you’ll find yourself on a beautiful highway somewhere. Just make sure you slow down and notice where you are.

What are your favorite scenic drives in Central America?