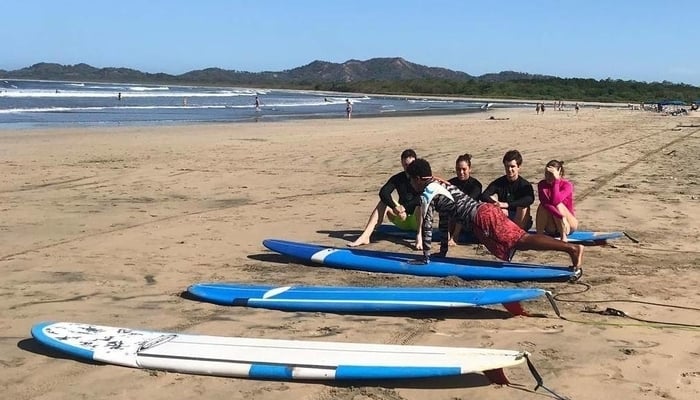 Jocelyn Grzeszczak takes a Costa Rica surf lesson in Tamarindo. Here, she talks about getting out of her comfort zone and what to expect in this Central American surfing mecca.

I recently spent a week “working” at the stunning Villa Buena Onda, in Guanacaste, Costa Rica.

We were filming content for the hotel’s website, and part of this included checking out Villa Buena Onda’s most popular tours. This meant I got to zip line and ride horses in Borinquen and cruise the Tempisque River in the Palo Verde National Park.

But my favorite “job” was learning to surf in Tamarindo.

Surfing is one of Costa Rica’s main attractions. People come from all over the world to surf Costa Rica’s pristine waves on both Pacific and Caribbean coasts. I can’t say that taking surf lessons was a lifelong ambition of mine, but I’d been in Costa Rica long enough by now that I definitely wanted to try it out.

I’d never surfed before and was nervous, but the instructors were super-nice and helpful. The lesson only took an hour, but by the end, I felt like I could’ve spent all day trying to get up on each wave.

Villa Buena Onda is in Playas de Coco, a long way from Tamarindo, so we were up early for the drive.

My heart was pounding the entire ride. I found myself wishing the car would continue down the highway instead of turning off for Tamarindo. It put it in simple terms, I was nervous.

I know it sounds crazy to be nervous, but getting out of my comfort zone always makes me jittery. And also, I’ve heard of more experienced surfers being mean and hostile to newbies like me. These were the thoughts going through my head as we drove to Tamarindo.

Despite my attempts to will the car elsewhere, we arrived at Iguana Surf after an hour and a half drive. Conveniently located right across from the beach in Tamarindo, these were the guys I was relying on to turn me into a world-class surfing legend.

We checked in, put our things in a locker, and I began loading on the sunblock. Someone must’ve taken mercy on my translucent skin because I was quickly given a black, long-sleeve rashguard.

I started applying sunscreen to every inch of my body left uncovered. I was making my way down to my legs when Fifo, the instructor, said: “Don’t put so much on your legs, it will make the board slippery and you could fall off.”

Great, I thought. We hadn’t even gotten on the beach yet and I was already a walking safety hazard.

Before I knew it, we were dragging our boards across the street and onto the sand for a quick surf theory lesson.

Fifo taught us the proper ways to paddle, stand up, balance and dismount from our boards, all of which I was desperate to memorize.

Then he went over some safety tips, like how to protect our heads from our surfboards after we fell off, or how to get off without twisting our ankles.

And those were just the dangers Fifo covered. When it was time to actually get in the water, I discovered several other concerns.

I immediately began to worry about crashing into someone else, maybe one of those hostile, get-off-my-wave surfers I’d heard about.

There seemed to be three layers of surfers: those closest to the shore, those in the middle, and those farthest out.

Each layer appeared to have their own set of waves to surf, but the setup didn’t make sense to me. How did the surfers furthest back not hit people from the other two layers as they made their way to the shore?

I shared my thoughts with Fifo, who pointed out that those farthest back, where the largest waves were, were the most skilled surfers. They could move side to side without ever needing to come to the shore. And when they did, they were able to plan their surf to avoid us newbies.

Life is better when you surf ??? If you take a lesson with us you can get with you a great memory of your experience with the amazing photos ?? taken by the guys of @photoshuttershot @abraham_berrocal #surflessons #surf #tamarindosurf #iguanasurf #iguanasurfcamp #surfschool #costaricasurf

That was reassuring, but there was also something else: the issue of carrying my board through the water while trying to dodge the waves. Which, by the way, were giant. Fifo had said a large swell was going to hit in the next day or so, and we were getting a sneak preview.

When we finally made it out to the waves that we would be riding, in the middle layer, Fifo helped me onto my board. Progress was immediately paused by the massive waves rolling towards us.

I tried to roll off my board to safely let the waves pass, but Fifo wouldn’t allow it. The wave grew closer until I felt myself getting pushed up and over the water, still on top of my board. It turns out that Fifo was underneath the entire time, diving into the wave while pushing me over it.

After conquering these waves, I was ready to actually try surfing them.

I watched as surfers in the back layer curved up and over what I estimated were waves somewhere around six feet tall. I shared this observation with Fifo, who laughed and shook his head.

“No,” he said, “the biggest one out there is about three feet.”

I said there was no way, and Fifo responded by turning my board around to face the shore. It was time to go.

Fifo told me to keep my eyes on the horizon and stand up when he said so. Before I knew it, he had given the signal and I was pushing myself up. Right foot followed by the left, arms spread out like airplane wings to keep my balance.

I wobbled a little, but I was standing, rapidly getting closer to the shore. This was amazing! I had gotten up on my very first try! I managed to ride the wave all the way into the shallow water and triumphantly hopped off my board.

For the rest of the session, I repeated the routine of battling the waves to get back out there, flopping onto my board and standing up on Fifo’s command.

I lost balance and fell off many times, but also managed to stay up a few more. And this was all while I had a drone circling above me, making sure to capture my every mistake.

By the end of it all, I was sad to be leaving the water and heading back to the shore.

I’m not sure how much I would love surfing without Fifo’s patient guidance, but the lesson had convinced me to give it another try one day.

And you know what? No-one was hostile to me at all. Everyone was super nice and friendly during my first Costa Rica surf lesson!

Jocelyn Grzeszczak is currently interning with Costa Rican Vacations, a travel agency based in San Jose, Costa Rica. She also serves as the News Editor for her university’s student-run newspaper, The Collegian.