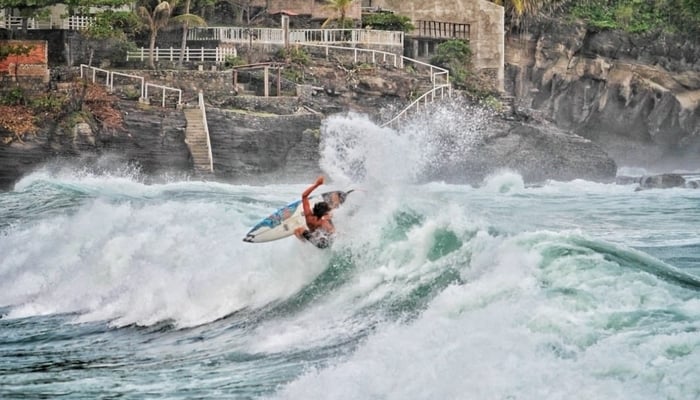 In El Salvador, surfing is more than a sport. It’s government policy and a lifeline to boosting tourism and improving the image of the country.

It’s no secret that COVID-19 has broken global tourism. This is nowhere more evident than in the developing countries of Central America. Without the resources of wealthier countries, Central America relies more on tourism. Put another way, the effects of zero tourism are easier to see in Central America than elsewhere.

El Salvador was the first country in Central America to close its borders and international airport back on March 17. The other countries swiftly followed as the pandemic spread.

Today, El Salvador is still closed for tourism, although the plan is to open the airport again on September 19. That’s still tentative, though, and can change at any time.

Arguably, of the myriad of losers in El Salvador tourism (let’s face it, there are no winners), the biggest is the surfing industry. So much work was put into El Salvador surfing pre-pandemic, the sport was the hope of the country.

Central America travel insiders know that El Salvador has some of the best surf in the region.

It’s a tiny country but its 307 km south-facing Pacific coastline packs in enough waves to turn even a president’s head around.

The best surf spots in El Salvador. Do you know them? https://t.co/O2DcPvaJD2

His Surf City campaign was all about bringing in tourists and changing the perception foreigners have about El Salvador.

Once Bukele won the election, the Surf City project got underway almost immediately. In November 2019, El Salvador hosted the Surf City Latin Pro Championship, which promised to be the first of many competitions.

“We’ll strengthen surfing as an element to attract tourists, through infrastructure, services, and first-class equipment.”

Set to take place in May 2020, the Word Surfing Games were tied to the Tokyo Olympics. 2020 was to be the first Olympics to feature surfing as a sport, and to get there, athletes had to compete on a Salvadoran beach.

It would have been a huge boost to tourism in El Salvador, putting the country on the sporting map. Furthermore, it was going to display a different part of El Salvador.

President Bukele said at the time, “This event will be the window to show our world-class waves and destination. Our country is open and ready to embrace new ideas, challenges and innovation.

“With Surf City El Salvador we are showing, with actions, that we have the political will to create a brand, a concept and a world-class destination.”

But then COVID-19 hit and everything got postponed, including both the World Surfing Games and the Olympics themselves.

“Given the global trend of the virus, we’ve decided it is in the best interests of the health and safety of all involved to reschedule the World Surfing Games to 2021”, said ISA President Fernando Aguerre in March.

“Our decisions have been and will continue to be guided by public health experts and authorities.

“We’re confident that this postponement will put us in the best position to celebrate a safe and spectacular edition of the event in the lead up to the Olympic Games.”

Now all eyes in the surfing world are on May 2021 when El Salvador is set to host the rescheduled games.

ISA Announces Postponement of World Surfing Games to May 2021.

Surf City El Salvador might be down right now, but it’s not out by any means. The government of El Salvador still has the will to use surfing as a wider introduction to the country.

May 2021 will show the world – a year late – how far El Salvador has come as a country. And if the pandemic allows surfers back in from the middle of September, they’ll get a sneak preview of what Olympic hopefuls can expect.

In the meantime, while we wait for tourists to return, El Salvador’s waves continue to pound. And who knows? Maybe our homegrown talent can use the extra time to hone their skills and become Olympic Gold Medal winners in 2021.