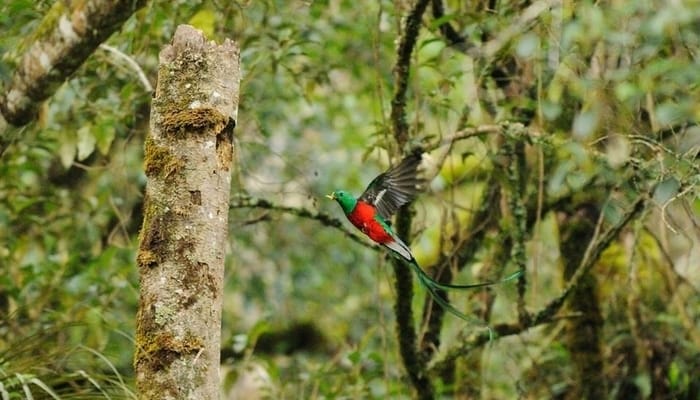 Searching for something different, Robin Kapiloff heads to San Gerardo de Dota, Costa Rica for a weekend in the cloud forest with her kids and the quetzals.

A great weekend escape from the Central Valley is the Trogon Lodge in San Gerardo de Dota, Costa Rica.

Located high in the cloud forests of the Talamanca Mountains, Trogon Lodge is a little over two hours from the capital city of San Jose, and one rainy season weekend I decided to take the kids someplace different.

The scenic drive south from San Jose down the Pan-American from the Central Valley is best done during the daytime.

The route winds across the Cerro de la Muerte and can be slow going with low visibility due to the clouds. Heavy trucks also thunder up and down this route and it can be treacherous.

The turnoff to Trogon Lodge is at kilometer marker 80, and upon exiting you begin the descent into the valley.

The views were breathtaking and the mountain switchbacks nerve-wracking in the dusk and rain. Another reason to drive in the day and indeed, the hotel recommends arriving before sunset.

About ten minutes before our destination, we could view the resort with a bird’s-eye view from the road and it looked like a fairytale! 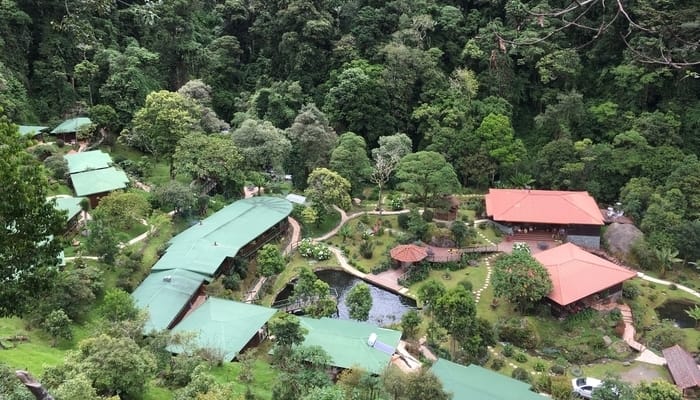 We arrived in a heavy Costa Rican downpour about five minutes before sunset. After parking up and checking in we walked to our cabin.

Trogon Lodge is a perfect rustic retreat. We had two queen beds, and each room has a space heater which we needed with the temperature hovering around 17 degrees. I “forgot” to mention to the kids that the rooms did not have TVs as we came here for nature. But they had their iPads and travel Jenga so we would survive.

We ate dinner at the lodge’s restaurant, and apart from us, there was only one other table of guests.

The San Gerardo de Dota area is famous for its trout, and the Trogon Lodge has its own trout pond. The menu has so many trout options, it was hard to decide! My son and I had trout (one in a coconut curry sauce and one grilled with garlic) and my daughter ordered pizza. 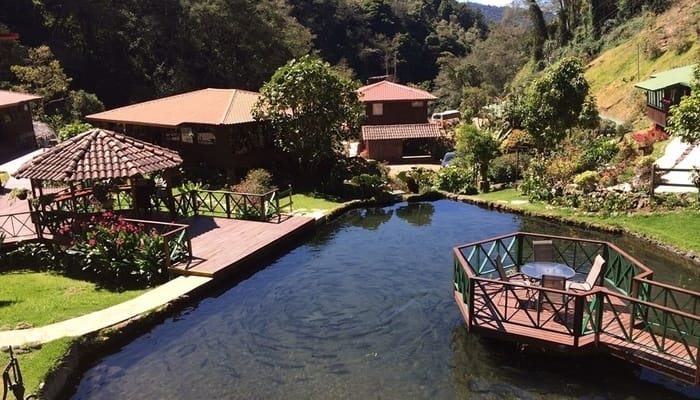 As soon as we ordered, the power flickered out.

No big deal to us as we’re seasoned Ticos used to losing power at home.

My son pulled a travel lantern from his backpack and my daughter had a small mag-light to read with. Our “oh the power is out – pura vida!” attitudes impressed even the waiters!

Back in our room, we were excited to note that the turndown service included a hot water bottle placed in the beds—yep, the cloud forests of Costa Rica can get that cold!

We had an early morning walk planned to spot the elusive quetzals.

When the alarm sounded at 5:00 AM, I began to second-guess taking my six- and ten-year-olds. But when would they ever vacation with quetzals again?

On the way to breakfast, we saw two quetzals in a tree right on the property. My daughter tried to get out of the walk after this! 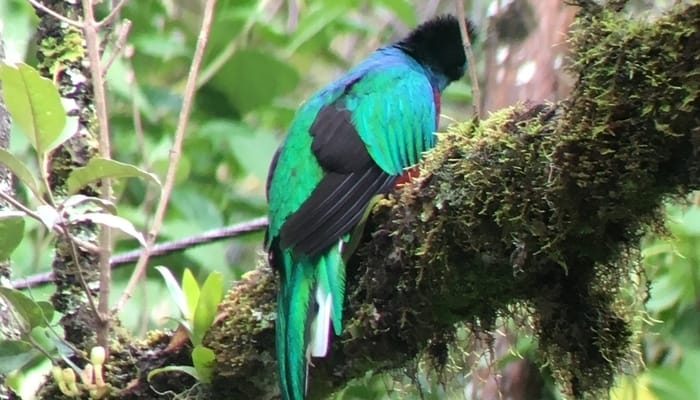 Our guide had trouble with his van and he only had a small car. He took the two other people in our group and we drove our own car.

This worked out better for us with the children and we got to use the heater for this first time since we bought the car.

I have never been ‘birding’ but this was amazing to see. We went to two different sites and saw quetzals both times. The second stop—down in the valley—was perfect. We were in a field with horses nearby and a quetzal landed on a fence post about ten feet away.

We then returned to the lodge to relax. You can get a lot done when your second breakfast is at 8:30 AM.

The restaurant at the lodge, again, was great. Hot chocolate and French toast for the kids and avocado toast, eggs and coffee for mom.

Trogon Lodge has hiking trails in the mountains on the property. I bartered with the children; some iPad time for them in exchange for a hike for me.

I also didn’t mention that while there is Wi-Fi, it only works in the restaurant and lodge area. The children sat outside with their iPads at the lodge while I took a nap on a couch: Win-win!

The lodge has a huge wood-burning stove, pool table, couches and chairs and full bar. I cannot count the number of hot chocolates my kids consumed over the weekend… but it was worth it to relax. 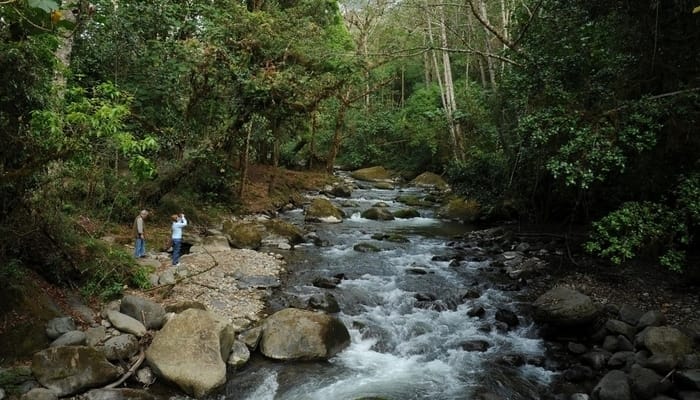 After the iPad timer was up (and I was awake!), we got ready to hike on the property. The sound of the river flowing and the cool crisp air got us into the spirit. We did one of the shorter hikes complete with waterfalls and plants you usually only see in nature books.

The trails are well-maintained and there were stairs, railings, and trail markers throughout.

It smelled so clean outside – we didn’t want it to end. If the kids were a little older, we could have done the longer hike, but they were troopers and had endured the bird walk at 5:00 AM.

We decided on lunch at the sister restaurant the lodge owns in town. It is only two-kilometers away – but I thought the kids had earned a ride.

Cafe Kahawa restaurant in San Gerardo de Dota has outdoor seating overlooking the Rio Savegre. All the food is locally sourced, and it has its own hydroponic garden onsite. My son and I again had trout and my daughter had fish and chips – made from – you guessed it – trout!

We viewed the garden and relaxed by the river. 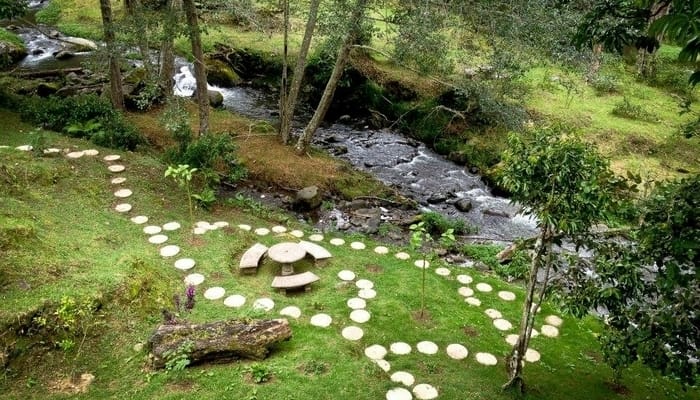 Once back at the lodge the children could hang out by the river and gazebo outside without me having to worry. They explored the garden, library, and the various fruit trees and used their imaginations.

We reconvened for more hot chocolates and competitive Uno games. It was nice to disconnect. 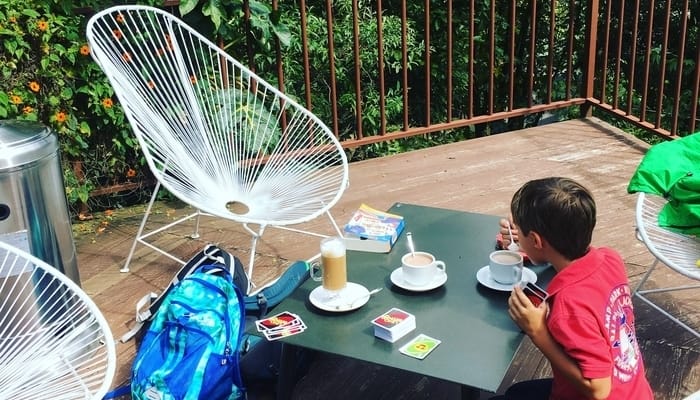 The hotel was filling up as it was a Saturday night. The lady at the front desk said many people from the Central Valley come for the night to get away from the noise, traffic, and hustle and bustle.

That night they had a buffet and we couldn’t order off the menu for dinner. I’m not usually a fan of buffets – but this was fantastic. The food was still locally sourced from their on-site garden and trout pond and made with care. Even the soups were fantastic.

We were sad to leave the next day but felt energized from our weekend at Trogon Lodge. I can’t wait to go back. It’s a different experience than the usual beach and volcano trips of Costa Rica.

This is a country that has something for everyone.

A list of restaurants, hotels, and other places putting on...