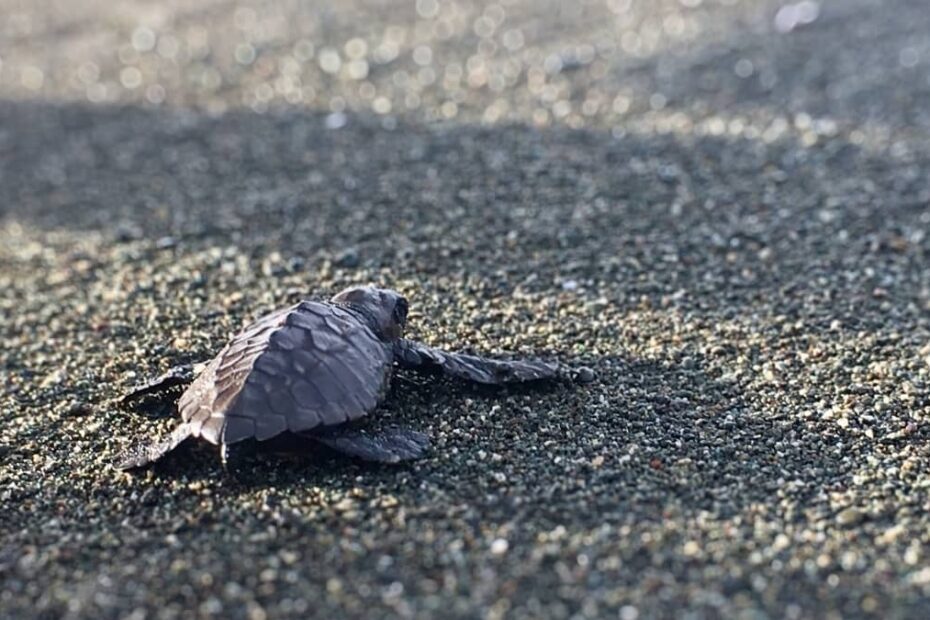 To mark World Turtle Day, we take a look at the seven best turtle nesting spots in Central America. This article contains some affiliate links, where we will make a small commission if you purchase anything after clicking, at no extra cost to you.

Central America is famous for many things, wildlife-wise. Its forests and jungles team with all sorts of life, from big cats to tapirs, monkeys, and parrots, all of whom help to promote the region as eco-tourism paradise. Travelers come to Costa Rica, Belize, and – increasingly – the other Central American countries who have followed the eco-tourism path of these two to enjoy nature and check out the animals. And that includes turtles.

With both a Caribbean and a Pacific coastline, the tropical beaches of Central America attract sea turtles of many different species, who come ashore each year to lay their eggs. There’s perhaps no other single concentrated spot on earth that sees so many turtles, at least any spot easily accessible to tourists. There are probably islands in the Pacific, Indian, and Atlantic Oceans that attract plenty of turtles, or remote African beaches. But tourists don’t see them so much.

Central American beaches, on the other hand, are easily accessible to most people, and turtles are a big attraction for many. From volunteering at nesting sites to simply hanging out and checking them out, turtles are big news in Central America.

There’s probably no better place to get a glimpse of turtles in Belize than the Hol Chan Marine Reserve in the Caribbean Sea, between the islands of Ambergris Caye and Caye Caulker. Although not a turtle nesting beach, it’s here where you’ll get amazing opportunities to swim, dive, and snorkel with loggerhead turtles, green turtles, and hawksbill turtles year-round in their natural undersea habitat.

As for their nesting sites, you’ll find many on Ambergis Caye itself, particularly on Robles Beach and Rocky Point Beach in the north of the island, away from the town of San Pedro. These beaches attract mainly loggerheads and green turtles. Peak nesting season runs from May to November.

Costa Rica is the most famous country in Central America for turtle nesting. There are plenty of beaches on both the Pacific and Caribbean side to check out and learn about turtles. But the best turtle nesting site, home to one of the biggest mass turtle arrivals (called an “arribada“) on the planet is Playa Ostional, near Nosara in Guanacaste Province.

Visitors to this Pacific beach will experience hundreds of thousands of olive ridley turtles laying their eggs between June and December each year. It’s a sight to behold. Please take care if you’re visiting Ostional during turtle season – some years have seen people picking up turtles or getting on their backs and dumb stuff like that. Don’t be that person please.

El Salvador isn’t famous for its turtle nesting to the outside world, but with almost 200 miles of Pacific coastline, the outside world is missing out. Hawksbills, olive ridleys, leatherbacks, and green sea turtles all come to the beaches of El Salvador to lay their eggs.

The best place to check out turtle nesting in El Salvador is Jiquilisco Bay, a protected bio-reserve in the southeast of the country. Here, you’ll find a large population of hawksbill turtles who live in the bay year round, and nest on the surrounding beaches. Hawksbill turtles are an endangered species, and Jiquilisco is one of the only nesting sites in the world where they visit. The turtle nesting season here runs from April to October.

Monterrico is a popular weekend beach destination in Guatemala, perfect for getting down from the highlands or out of the capital for a few days relaxation with the sun on your back and the salt in your hair. But did you know this Pacific beach is also the best place in Guatemala for turtle nesting? The miles and miles of beaches here, famous for their pounding surf, are where leatherback turtles (the world’s largest), olive ridleys, and green turtles come to lay their eggs between June and December each year.

If you’re looking for turtle nesting beaches in Honduras, you’re beset off heading to the Bay Islands in the Caribbean Sea off the northern coast, particularly Utila. Here you’ll find hawksbill, loggerhead, and green turtles coming ashore to nest each year between June and December. Utila is also famous as a dive center and one of the best places in the world to get underwater or get qualified to get underwater. Like Belize, Utila and the other Bay Island also offer great opportunities to dive and snorkel with turtles year round.

With long Pacific and Caribbean coasts, Nicaragua is another country with plenty of turtle nesting spots to check out. The best place in Nicaragua for turtles, though, is a wildlife reserve south of the beach town of San Juan del Sur called Refugio De Vida Silvestre La Flor. Close to the Costa Rican border, the beaches here are important nesting grounds for olive ridleys, hawksbills, leatherbacks, and green sea turtles. La Flor is similar to Ostional in Costa Rica for its olive ridley arribadas where over 200,000 come ashore every year from July to December.

Down at the bottom of the Azuero Peninsula in Panama, not far from the community of Pedasi, is a small island in the Pacific off the coast called Isla Cañas. It’s a wildlife reserve in its own right due to the thousands of leatherback turtles, loggerhead turtles, and olive ridley turtles that make their way here every year to nest between July and November. Isla Cañas isn’t the easiest place on our list to reach – well out of the way of most of Panama. But a trip out here is well worth it for turtle lovers, surfers, and beach bums in general.

There are plenty of places we missed in our list around the region. There’s Tortuguero on the Caribbean side of Costa Rica or Isla Juan Venado on Nicaragua’s Pacific. There’s also Tobacco Caye in Belize, the Bocas del Toro in Panama, and many more. But if you’re interested in wildlife and nature in general and turtles in particular, you’ll find any country in Central America a perfect place to view and learn about these beautiful creatures. Happy World Turtle Day!