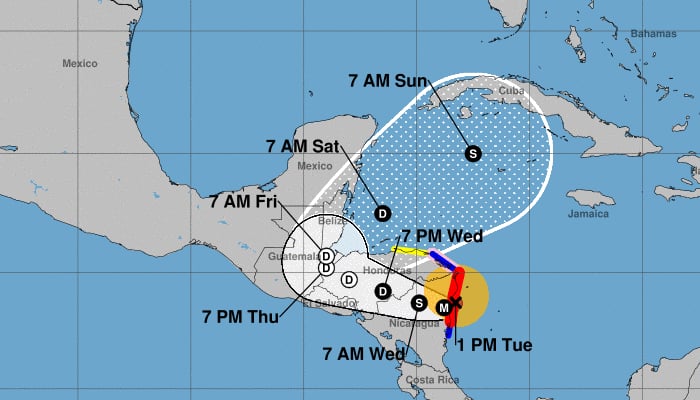 Landfall began at 4:30 AM, according to Nicaragua’s disaster relief agency, SINAPRED. Eta hit as a category 4 hurricane with winds of 225 km/h.

The storm will move across northern Nicaragua, into Honduras, Guatemala, and Belize before heading back out into the Caribbean.

The next few days will see up to 30 inches of rain in the region, with the real danger of landslides and flooding. Despite extensive damage to Puerto Cabezas, there are no fatalities so far. Honduras, however, reported one fatality in a collapsed building.

In Nicaragua alone, UNICEF expects over 1,200,000 people to be affected by Eta.

Half a million of them are children, according to a statement on UNICEF’s website. In the statement, UNICEF said it had a “joint response plan” to help affected areas.

⚠️#HurricaneEta hit Nicaragua early Tuesday as a powerful Category 4 storm, potentially impacting nearly 500,000 children. @UNICEFNicaragua and its partners have prepositioned emergency supplies and developed a joint response plan to address the needs of children and families.

“As part of our planned response, UNICEF is working with the Government and our partners to reach children and families with urgently needed support,” said the UNICEF deputy representative for Nicaragua, Paolo Sassaro.

“These efforts include providing water and hygiene supplies and disseminating risk and safety messaging to communities. We are also coordinating closely with authorities to ensure that shelters are suitable, safe and equipped with the necessary provisions for children.”

In Honduras, authorities issued a red alert for half the country. The rest of Honduras is under yellow alert. Flooding has already began in many places, including La Ceiba on the Caribbean coast.

Belize also remains in a state of high alert. Forecasts expect Eta to clip the south of Belize on its way back out into the Caribbean. Once back over the sea, fears are it might reform into a hurricane again off Belize’s coast.

Here’s La Ceiba, #Honduras‘ third largest city, on the north coast. It’s super prone to flooding. Two hours of downpour and you have to wade mid-calf across some downtown streets. But this is before the eye of Hurricane #Eta is anywhere close, and it’ll get 3+ more days of rain: https://t.co/nLfl79XIYv

Guatemala is also starting to see strong winds and rain.

Costa Rica and El Salvador also expect a lot of rain over the coming days, although neither country is in the direct path of Hurricane Eta. El Salvador has begun evacuating people from flood-prone areas in anticipation of the rains to come.

All Central Americans all have vivid memories of Hurricane Mitch in 1998. In the wake of that storm, mass-flooding and landslides killed over 11,000 people.

Remember #HurricaneMitch in 1998? I do. It took years for #Honduras and #Nicaragua to recover. Don’t look now, but #MitchII is hitting the isthmus. During the #coronavirus pandemic. With a distracted and arguably disinterested US. Ouch. #Eta #HurricaneEta