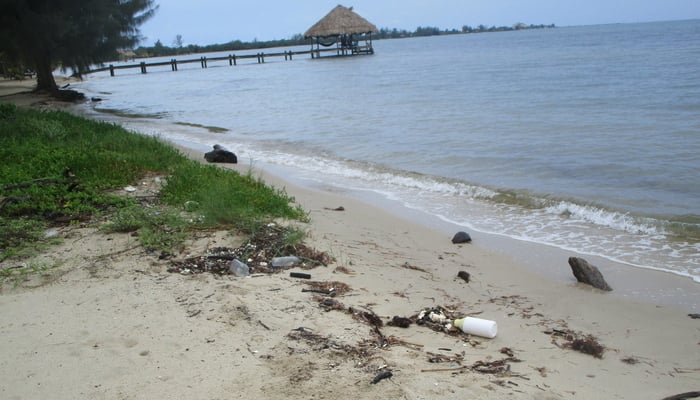 In this short piece, Placencia resident Gary Peterson discusses the problem of plastic beach trash in Belize, and urges everyone to start small when solving this issue, right at your local bar!

In Belize, many voice disdain over the amount of plastic washing up on the beach. On any beach you’ll find water bottles, plastic utensils, flip-flops, toothbrushes, and more. All over Belize it’s the same. Plastic trash washing up everywhere. I’m truly astonished how much.

When I inquired later, a resort employee told me not to worry. Oh, and to not touch the packages wrapped in black plastic that sometimes wash up.

The stories involving drug trafficking stunned me. You hear what happens to locals who find packages of white powder on the beach. I’ve always taken that resort employees advice to heart. Ignore and don’t touch them. But I digress.

When the weather turns rough in the rainy season, it’s worse.

I live in Southern Belize on the Placencia Peninsula and I pick trash up daily on my beach. I also watch as tourists walk the beaches with armfuls of plastic trash they pick up. It’s rare for couples to stroll holding hands because they don’t have a free hand anymore.

Many hotels, municipal authorities, and other organizations around now arrange weekly or monthly beach cleanups, recruiting tourists and locals alike to chip in, generate some local pride, and strive to keep their beaches clean. The Crocodile Research Coalition here in Placencia is a prime example of this.

Locals say this trash comes from washed-out tributaries up the coast. Or it’s dumped off cruise ships or washed here from neighboring countries.  Or all three. I’m sure they’re correct that a lot of this trash comes from elsewhere. But equally I’m sure a lot of it is local, and education is key to changing people’s mindsets regarding waste disposal.

It would are great to see more groups here in Belize like Clean Beaches Honduras in neighboring, well, Honduras. We certainly are not the only Central America country suffering from a trash epidemic.

We either need biodegradable plastics or to get rid of them altogether.

In Belize, they try to introduce biodegradable or cloth bags all the time but without success. Most stores continue to use plastic bags, often doubling them. This is another reason we need more education regarding this topic.

A gripe among my scuba diving group in Placencia is the continued use of plastic straws. Straws are in every cocktail and most end up in the ocean.

In a 2018 study, researchers from Australia’s Commonwealth Scientific and Industrial Research Organisation (CSIRO) found that just over half of all the sea turtles on earth had eaten plastic. I’ve seen photos of sea turtles with their nostrils blocked with plastic straws. Sea turtles look at floating plastics as food. Once eaten, this damages their digestive systems.

Whales are also showing an increase of plastics in their stomachs. When a whale washes up on shore and dies, marine biologists search for answers. During autopsy, they often find torn stomach linings from the plastic junk. This leads to starvation and death.

A few members of my dive group have started a protest at Placencia area bars that put straws in cocktails. Put a straw in my drink, no tip for you!

If we all, when ordering a drink, said “I don’t need a plastic straw, thanks”, we could generate a positive impact on local marine life. It’s a small start.

So the next time you cozy up to the bar for a rum punch, say no thanks to the straw and tell the server why.

Start your movement with something like that and make a turtle’s day.

Covid in Central America After a Year: A Look at the Numbers and a Plea to Get Back to Normal

Exactly a year into the Covid pandemic, we take a...