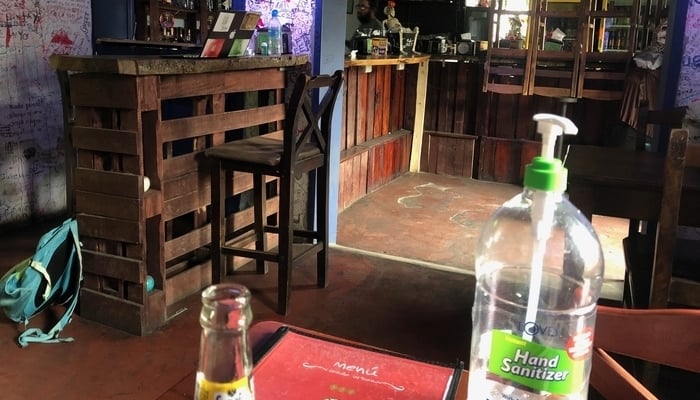 The coronavirus lockdown is the new normal across the world. But outside of the “developed world”, in areas without any real social safety net for people, things are especially hard. Could it be that the cure is more dangerous than the disease in Central America?

Every Sunday I have a Zoom meeting with a group of my oldest friends back in England.

It’s one of the only things I look forward to in a world that extends no further than my front door. We’ve been doing this for three weeks now, at 11:00 AM Costa Rica time, 6:00 PM over there.

We start with a quiz or bingo with their kids and families, then the wives and kids leave us boys to crack open a beer and chat for a while. I know, I know. Very patriarchial but it’s a tonic for me. The downside is that I find myself drinking beer at 11:00 AM every Sunday, but you know what? If this is the apocalypse, who cares?

Anyway, some of my friends are furloughed from work.

In the UK, that means they are temporarily laid off, rather than fired outright. The government has pledged to pick up 80% of their salary for the duration of the furlough. It’s something never seen before in the UK and it provides a much-needed safety net for millions. One in four workers in the UK are – or will be – furloughed and two-thirds of British companies are taking advantage of the scheme.

Talking about this with my friends made me realize, just how vulnerable we are in Central America. This is still the “developing world” and social programs like the furlough scheme in the UK are inconceivable here.

Central American governments (most of them) mean well in this crisis, but they don’t have the money to pay 80% of people’s salaries. There is zero chance of that happening and the brutal reality is that most people here are on their own.

We’re seven small economies here in Central America, each one turned off like a switch, and I have to wonder what the plan is to switch them back on.

Because in Central America, a region with high unemployment and severe poverty even before COVID-19, the cure might turn out to be more dangerous than the disease.

Now don’t get me wrong. I’m no coronavirus denier. I’m not one of those nut jobs you’re seeing on the news in Michigan and Minnesota marching for their rights to hang out in shopping malls again with their guns, calling the whole thing a hoax. I believe in social distancing, wearing masks, washing hands, and all that. I believe in the measures taken thus far. The region as a whole has done extremely well in flattening the curve and keeping this virus at bay. But at what true cost? I guess that’s what I’m asking.

Much of Central America operates in the cash economy, the informal economy if you will.

I’m talking makeshift roadside stalls in Costa Rica selling watermelons, the kid on the beach in Nicaragua selling whistles, the lottery ticket guy, the 12-year-old girl selling chewing gum on the streets of Antigua. These people have to work. They have no choice because if they don’t work, they don’t eat. To them, locking themselves down at home to wait out the virus is impossible.

And then there are the people suddenly, abruptly unemployed. Costa Rica, Belize, and Guatemala have thousands of people like this. Heck, count Nicaragua, Panama, Honduras, and El Salvador too. Count them all. Every Central American country has seen massive layoffs and there is no adequate government safety net.

We’re going to see a lot of people jump from unemployment into the informal economy because they have no choice. And if they’re in, say Guatemala, El Salvador, or Honduras, they’ll find themselves arrested, fined, or jailed for breaking curfew. Because it’s either that or starve.

It seems like the whole stay at home thing is almost bourgeois in its outlook.

We all say it, we all add nice hashtags to it and smugly feel better about ourselves, but only those who can afford to actually do it. Those who can’t afford it go out to hustle a buck because if they don’t they’ll die. It’s that simple.

They say coronavirus will be a great leveler, but I don’t believe that at all. Inequality has always been rampant in Central America. This virus will do nothing to equalize us. The rich will #QuedarteEnCasa and everyone else will go out, risking infection, arrest, fine, and imprisonment to sell chewing gum.

A lot of people are doing good things.

Many companies are standing up and helping their employees and ex-employees as much as they can. I’ve seen and experienced this myself. I’m receiving so many emails about good deeds, I’m overwhelmed and have a backlog of them to write up. People using their networks and companies to help others, to do good. We’re compiling a crisis heroes series to cover as many as we can, and it’s an honor to do so.

But at the end of the day, there has to be some plan to get out of this.

I listen to the news from North America and Europe where they talk about keeping the lockdowns in place until they find a vaccine. Now, in a country where you can receive 80% of your pay in perpetuity from the government during this crisis, that might be a valid proposition.

But in a country where you receive nothing, it’s simply not feasible. A vaccine for this will take many months at a minimum, probably years. Central America doesn’t have that long.

I have zero doubt in my mind that the longer this goes on in Central America, the worse the social and economic fallout will be.

Extreme poverty and the problems that come with it like malnutrition, stress, high blood pressure, cancer, suicide, gang violence, and crime will end up taking more people than coronavirus if we’re not careful – if we’re not looking at a sensible, tactical way to get out of this and save our already fragile economies.

Put it this way. As I write, Costa Rica has seen five COVID-19 deaths. That there are so few is admirable and I respect and applaud the government of Carlos Alvarado for how they’ve handled coronavirus in Costa Rica.

But say if between now and the next death, two people have stressed-induced heart attacks, two people kill themselves because they can’t buy food or don’t want to be a burden to their families, and two more people find themselves destitute on the streets, will that mean the cure is worse than the disease?

And then there’s the rise of authoritarianism.

Apart from Costa Rica and Belize, every country in Central America knows what dictatorship is like. Panama, El Salvador, and Guatemala have all suffered under strongmen dictators in recent years. Nicaragua (and many would also say Honduras) still does.

Before the pandemic, Nayib Bukele, the new president of El Salvador, brought troops into the National Assembly to force politicians to sign off on a loan deal. Since coronavirus, Bukele’s stock has soared as – in fairness – he’s handled the crisis well.

El Salvador was the first country to enact some measure of a security net under her people during this pandemic. But alongside the help, a nastier, authoritarian streak has emerged from Bukele.

El Salvador, Guatemala, and Honduras have all returned to democracy within the last 30 years after decades of dictatorship, civil strife, and war. It’s reasonable to wonder if the lockdown measures enforced in these countries will abet the return to dictatorship. And if this pandemic sets the clock back and puts any one of these countries on that path, then yes, the cure will be devastatingly more dangerous than the disease.

Costa Rica aside, we are young, fragile democracies here. We can’t take them for granted and we can’t assume some caudillo won’t take advantage of the situation.

This is why I cringe when I see these idiots in the States marching for their “freedom” and demonstrating against lockdown. They could be in El Salvador where there’s a real danger of dictatorship before this thing plays out.

I have no answers to any of this, all I’m doing is observing and opining. But hundreds of thousands of people in every Central American country thrown into poverty, unemployment, and despair without an adequate safety net and a set of fragile democracies where institutions are still weak is a bad, bad mix. It’s a potentially worse mix than coronavirus itself.

It’s going to take a mixture of entrepreneurship, quick thinking, philanthropy, and thinking-outside-the-box to help the desperate economies of this region and keep flattening the curve at the same time. Nobody is suggesting we just open the floodgates again. We’re open to any suggestions.

If we can start to think of a way to get back to work in stages, find a way to restart tourism in a sensible way, if we can help each other through fundraising and good deeds, if we can stick together as a region, we could come out of this well. I’m optimistic we can do this. I’ve heard from too many good people throughout this crisis to doubt how powerful we can be.

But if we rely on government and sit waiting for a vaccine that might never come, without a plan to gradually restart our economies post coronavirus lockdown, then I fear that Central America might find itself harking back to a past we thought we’d seen the back of.

Seven Things for Hotels to do During Lockdown

Life in a Costa Rica Travel Agency During COVID-19

As the global travel industry comes to terms with the...

Surviving During Times Of Coronavirus: How Costa Rica Travel Agencies Are Adapting