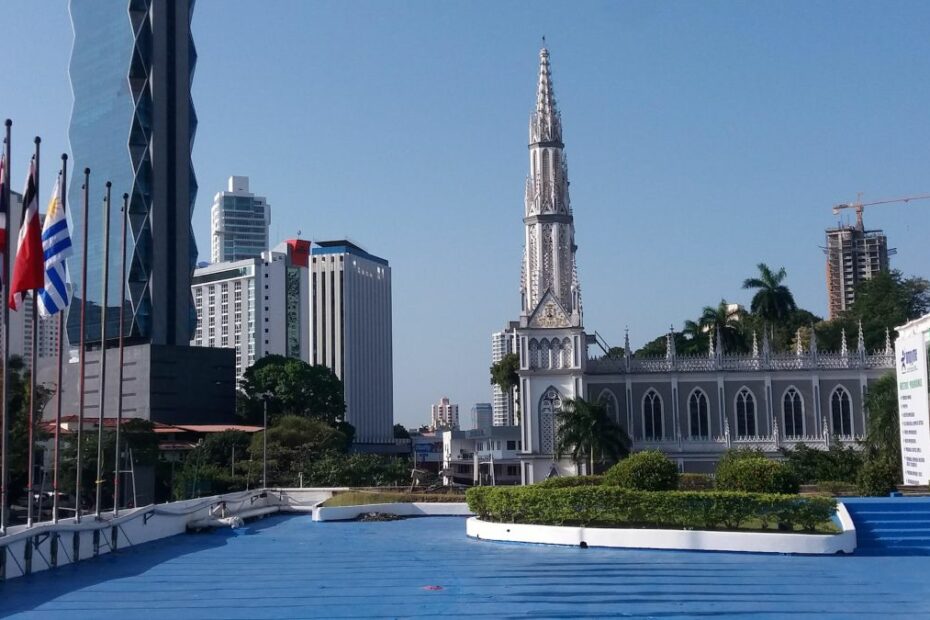 El Cangrejo, Panama City is still one of the coolest, most desired parts of town. Expat writer Lee Elliott explains why he calls this district home.

If you’re thinking of moving to Panama and are wondering whereabouts in the capital to settle, you can’t go far wrong with the neighborhood of El Cangrejo.

Whether you’re single, attached, have kids, a hipster, a millennial, a baby boomer, or whatever, El Cangrejo is where you want to be.

With its international and multicultural vibe, surrounded by universities, colleges, parks, and its plethora of restaurants, the tone of the area feels right. El Cangrejo is like a nicer end of a gentrified Bushwick, with one foot in the past and the other massaged by an emerging new populace of bohemian émigrés.

The mid-century modern architecture gives El Cangrejo an other-world-like angle of cool. Rough around the edges but with its heart in the right place. This is my part of town!

Founded in the 1950s, the area was the first Jewish quarter and was once exclusive. A huge bust of Albert Einstein remains on Via Argentina, harking back to the area’s roots and academic foundation.

While the original populous have long since moved on, El Cangrejo remains fashionable and self-contained due to its layout.

During the day, students with book bags walk among families with children, and at night the restaurant, bar, and nightlife scene buzzes without ever getting out of hand. Walking around here at night is safe.

El Cangrejo or “The Crab” in translation, gets its name due to the street layout. The center of the area is the body, with its residential streets as legs stretching out on each side. And then the two claws as inward curving blocks reaching north.

On the crab’s west flank you have the University of Panama campus and Via Transistmica 3 – the main highway through the city. The eastern flank is Avenue Central España and the main subway line. Walled between these two transit routes you’re protected, but never cut off.

Towards the crab’s tail lies all the casinos, hotels, and shopping. Here you can gamble the night away, grab rooftop cocktails, shop at Rey’s with their excellent selection of imported and local produce, or pick up all your office supplies at Staples.

The final tip of the tail is a forgiving Iglesia del Carmen, an impressive Neo Gothic-styled church, and local landmark.

Across the head of the crab curves the heart of the area, Via Argentina, a cosmopolitan avenue of palm trees, restaurants, language schools, and realtors.

In the center of all this, hugged by the crab’s right claw, lies Parque Andrés Bello – nestled like a green lung in the heart of a hip and bustling student area. This park acts as the hub of the community and is part of what makes the area so attractive for families.

Parque Andrés Bello is not huge – more like a perfect, comfortable size. You’ll find basketball courts, recreational areas, outdoor exercise machines (free to use), and enclosed, well-serviced play areas for all ages. The park is always full of families and children hanging out and relaxing, or screaming on the zip wire between hunting their Pokémon.

While the southern entrance has calm seating around an ornate fountain, the far left corner is an enclosed dog play area. A huge dog toilet, for sure, but it almost passes for a petting zoo from the outside and children love it. The park also holds concerts, festivals, community fairs, and occasional political rallies. And it always has cheap shaved ice-cream.

What at first seemed odd, but which also makes the place so relaxed and safe, is that in the center of the park is a police substation. This acts as the park’s own permanent security. Parque Andrés Bello is a great place to hang out and relax whatever age you are. Late afternoons are good once the heat of the day subsides.

El Cangrejo is the perfect base

Although there are cheaper areas to live, and some may prefer ocean views or historic architecture, El Cangrejo is the most diverse and safe area in the heart of Panama City. Expats mingle with locals rather than become segregated.

The realtors along Via Argentina make viewing apartments easy by giving you the keys to places you like for a simple $5 deposit.

Although rents in El Cangrejo are higher than other areas, they still pale compared to rents in the likes of London or New York.

Meanwhile, until I may want to retire to a beach or the cooler air of the mountains, The Crab is the perfect base for my family. It meets all our needs in the center of a vibrant city.