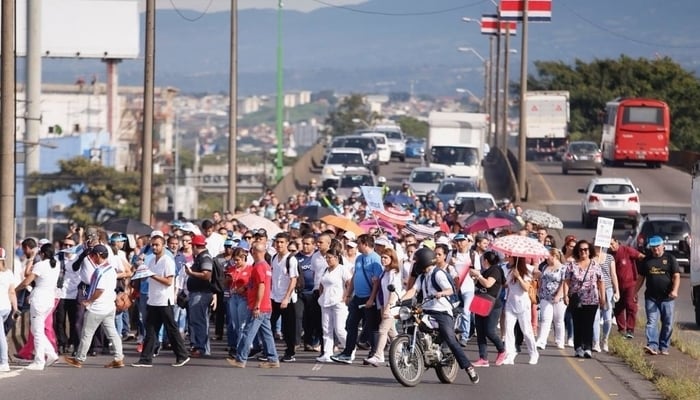 A general strike starts today in Costa Rica as unions fight proposed measures by the government to haul the country back from the economic abyss.

If you’re in Costa Rica, you may have noted there’s a general strike – or shutdown – happening today. I say “may”, because as I write, I don’t know how this will turn out. It’ll either be a big nothing burger or we’ll be looking at a post-apocalyptic situation reminiscent of the The Walking Dead, or anywhere in-between. I kind of skew towards somewhere between nothing burger and in-between rather than The End Times, but who knows?

I mean, many public services and utility companies have already promised that service will continue as normal, and with the general lack of public support for this strike, I’m inclined to think they will. But what do I know?

But from many of the comments and posts on the Costa Rica expat Facebook groups, it seems many differ with me and lean towards the apocalyptic side of things. Expats love a good drama.

There’s talk of stocking up on food, booze, gasoline, the essential stuff. There’s talk of hunkering down and riding things out like those crotchety old coots in the Everglades or the Florida Keys always say they’ll do as the hurricane approaches and they dismiss the evacuation warnings.

Roadblocks, power outages, cell services down, ATMs out of service, garbage disposal halted. Schools, law enforcement, hospitals, airports, and public transportation all out. For maybe the whole week! Or longer. Could even be even the internet will be down, who knows? That’s what they say, anyway.

The latest news on the grapevine is that the taxi drivers will strike too because why not? Taxi drivers always strike anyway about everything so it would astonish me if they weren’t manning the picket lines today. Great news for Uber, anyhow. That’s if they can get past the barricades.

The sound of the encroaching drum beat is dread inducing, if I must be honest. Conflicting stories of how long the strike will last go from nonchalant to apocalyptic. #SanJose #HuelgaCR #costarica #Alvarado

So is this all social media hysteria or legitimate?

Well, you’ll have a better idea than me by now, but union reps have advised the public not to take their kids to school or go to any hospital appointments they might have. A body blow for some, seeing as it can take a long time to wait for a hospital appointment.

And that’s the point. It takes a long time to get a hospital appointment because the CCSS, the health and social security system in Costa Rica, is broke. The government is broke. Beyond broke, in fact.

Costa Rica is on the threshold of becoming Greece.

Without going too deep into the weeds on this (and I couldn’t even if I wanted to – I’m no economist), Costa Rica’s deficit will hit 7.1% of GDP this year and 7.9% next year. Costa Rica has the highest deficit in Central America and is the only country in the region where the deficit is increasing rather than decreasing.

The Costa Rican government spends five times more than it takes in with much of that going on salaries and pensions in the public sector. To say Costa Rica’s public sector bloated is an understatement.

Costa Rica also fails to collect about 30% of the taxes it should. Tax evasion is a national sport down here, although stringent laws have now been passed to remedy this situation, including the introduction of VAT (or IVA – impuesto al valor agregado) and electronic receipts (facturas electronicas).

Last year the Solis administration expressed doubts they could pay the aguinaldos of public sector employees (the aguinaldo is the “13th month” bonus that all employers have to pay employees in December). They did it in the end, but can they this year? Or next? Or the year after? If things carry on like they are, they won’t. The public service workers expect their aguinaldos. It’s their right, under the law.

But where will the money come from? How do you pay money you don’t have?

And at long last, the recently elected government of Carlos Alvarado is doing something.

I suspect they’re only doing something because the last four administrations did nothing and there’s no road left to kick the can down. I already mentioned that. It’s been going on for years, as this 2013 post below from the Tico Times demonstates.

But at least now – in 2018 – they’re doing something or proposing to do something. And the public workers’ unions don’t like what they propose, hence today’s strike.

As of today, Project 20.850 (The Strengthening of Public Finances) is still nothing more than a proposal, not even properly debated, let alone passed, by the Legislature.

But inside the proposal are some key measures designed to lower the deficit by almost 2% over the next few years.

A tax on services like Netflix and Uber are part of the proposal as well as a 2% tax on basic foodstuffs. But what is getting up the public workers’ unions noses are the measures concerning a ceiling on salaries and pensions and cutting “excessive benefits”. For example, did you know some public sector workers get bonuses for showing up on time? That’s an excessive benefit right there.

And this is why we are where we are today. The unions say the strike will be indefinite until the Strengthening of Public Finances proposal is history. But public support is not with the unions this time around. And that means the strike may end up being a damp squib. I mean, in the private sector, showing up for work on time doesn’t merit a bonus.

Most people recognize the government has to do something – anything – to bring the deficit down and pull Costa Rica back from fiscal calamity.

Costa Rica cannot continue on the path it’s on. Even the proposals on the table at the moment aren’t sufficient in the long term, but they’re a start.

We have to start somewhere after years of inaction. I’m glad Carlos Alvarado’s government is trying to do exactly that. It’s like ripping off a band-aid or downing a shot or knocking back that spoonful of medicine. Get it over with quick.

Pissing off many people right now is better than the real economic devastation and lost jobs that will happen if we do nothing and tumble into the abyss.

To keep up with the events of today (and for who-knows-how-long), get on Twitter and follow the hashtag #huelgaCR (“huelga” is “strike” in Spanish).