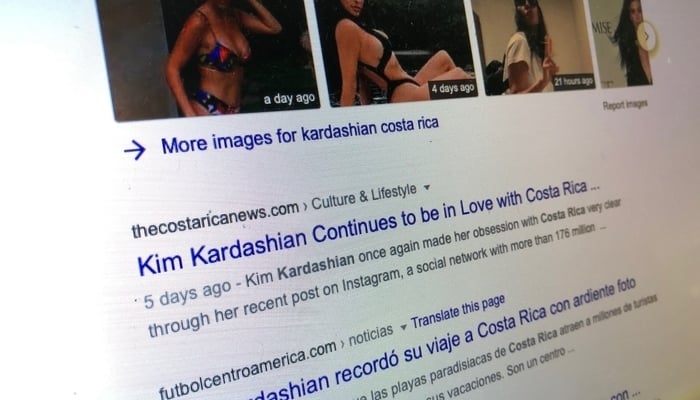 Kardashians in Costa Rica: Should We Care?

As Kim and Kourtney reminisce about their pura vida vacation on social media, we look at why talking about the Kardashians in Costa Rica might not be as banal and trivial as you’d think.

A week after Kim Kardashian stirred up the press in Costa Rica and around the world by posting a photo from her June 2019 trip to the Land of Pura Vida, her sister Kourtney has done the same thing.

Kim captioned her photo, “Costa Rica throwback. When it’s safe to travel again, where are you going?”. The heavy implication being, to the delight of the crippled Costa Rica travel industry, that she was coming back down here.

Costa Rica throwback. When it’s safe to travel again where are you going?

Kourtney’s pic, credited to the fine paparrazzi photograhers of Splash, just labelled “Costa Rica” as her location. That was enough, though, to get press attention, with La Nacion, CRHoy, and others dedicating headline space to her.

Kourtney’s two-piece swimsuit “revealed her sculptured and toned figure,” gushed CRHoy as they talked about her “sensual photos”.

“The Kardashians are obsessed with Costa Rica’s beauty,” AM Prensa told us.

Not that we can talk. We’re also dedicating headline space to the Kardashians in Costa Rica. But we hope we’re giving this story some more context as relates to tourism, rather than breathless reporting on a bikini or the Kardashian “obsession” with Costa Rica.

This should come as no surprise to any brand that deals with the Kardashians. Brands pay hundreds of thousands of dollars for a shout out on a Kardashian Instagram post. So when two of them talk about Costa Rica for free, that’s massive for the ICT. A massive moneysaver, at least.

According to yesterday’s CRHoy Kardashian story, if the ICT were paying Kim for her recent social media Costa Rica love, they’d owe her some $2,000,000.

Kim has over 140 million followers on Instagram and Kourtney almost 96 million. That means over the past week, almost 240 million people, give or take a few thousand, now know about Costa Rica as a vacation destination. More than that when you add in the coverage from the Daily Mail and other international media.

Put simply, if Kim and Kourtney dig Costa Rica, people will come in a post-COVID world. That’s the power they have. It’s a huge boost for Costa Rican tourism at a time when it’s on its knees.

The Kardashians came to Costa Rica in June 2019 and stayed at Villa Manzu on the Papagayo Peninsula.

They featured the trip in their Keeping Up with the Kardashians reality show, in which Kim revealed that her six-year-old daughter North wanted to live in Costa Rica. This show, aired in November, just before the last high season, didn’t harm Costa Rica’s tourism prospects pre-pandemic.

Last year’s trip was their second visit. In 2017, a bunch of Kardashians came for the first time, staying at Villa Manzu and giving Costa Rica a welcome dose of publicity.

Reaction on the ground in Costa Rica was a little more mixed back then. One of the Kardashians seemed to think Costa Rica was an island, which caused a small scandal, because in those halcyon pre-pandemic days, people could afford to get upset and offended over such things.

In Costa Rica, there’s an idea of the stereotypical gringo tourist who thinks the place is an island. Man, I miss those carefree days, when people actually cared about stuff like this. You know, instead of mass unemployment, infection, and social unrest. Simpler times, baby. Simpler times.

Anyway, where was I? Oh yeah. Kardashians in Costa Rica. The point is, for all the mockery and snobbery about the Kardashians, their highlighting of Costa Rica helps the country, even in these dark times. I’d venture to say the Kardashians are doing more right now to help Costa Rica’s broken economy than the people in charge are.

As the country gears up to restart international tourism on a limited basis in August, having the Kardashian influence onside is no bad thing.

A recent MMGY Global study highlighted in Costa Rica’s La Republica newspaper, found that people in the US are more likely to postpone, rather than cancel their vacations in the wake of the COVID pandemic.

Although we still don’t know whether travelers from the United States can enter Costa Rica next month or not, the prognosis for Costa Rica travel look good in the long term.

And Kardashian influence or not, that’s something to be thankful for.

The million dollar question is, how will people survive in the meantime? With unemployment rising and no apparent plan to feed or help desperate people in the areas where the Kardashians visit, the Costa Rica they return to might be very different.

James Dyde is the editor of www.centralamerica.com. He lives in Escazu, Costa Rica