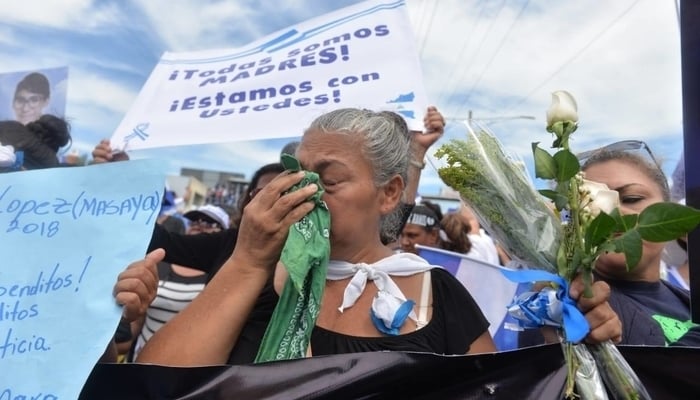 Should I Go To Nicaragua? Well… Yes… But Only If You’re Anderson Cooper

Should I go to Nicaragua right now? That’s a question we still get asked, a month after we first tried to answer it.

But a month is a long time in Nicaragua at the moment. Things can turn on a dime and there’ve been many turns since I last wrote about this on May 2.

I compared the crisis with Tunisia’s Arab Spring or Czechoslovakia’s Velvet Revolution. But there’s nothing velvet about this revolution and the Arab Spring had many flavors.

I saw parallels between Nicaragua and Tunisia but I was naïve. Or hopeful. I suppose I hoped Ortega would love his country and stand down without shedding more blood. But I guess I always knew it was never in his nature to do that.

So now I’m seeing parallels between Nicaragua and Egypt, except that Egypt got rid of Mubarak quicker.

The Egyptians took 17 days to topple Mubarak. Right now in Nicaragua, we’re on day 51 and Ortega’s going nowhere. Like I said, it’s not in his nature.

But apart from Ortega not budging, Nicaragua is like Egypt. Deaths, injuries, arrests, and disappearances. Torture. Blood on the streets.

Almost 900 people perished during Egypt’s protests in 2011. That sounds a lot more than the (at least) 120 deaths so far in Nicaragua. But not when you account for Egypt’s population being sixteen times greater than Nicaragua’s.

I’ve taken criticism for these constant comparisons with other revolutions, but I think they’re necessary.

Nothing in this world is original anymore, including revolutions.

Every revolution has comparable ones in the past to learn from. So if we study what’s happened elsewhere, we can hopefully understand what’s taking place here and how it will resolve. Human nature is human nature all over the world, that goes for both dictators and the people trying to get rid of them.

I guarantee Ortega is studying what’s happened to his fellow dictators, from his predecessor Somoza to the Castros, Mubarak, Assad, and the rest of his filthy ilk.

Since the National Dialogue collapsed on May 23 (only one day of which Ortega and his wife bothered to show up to), the repression has escalated.

On May 30, a Mother’s Day march in Managua turned into a bloodbath as government forces opened fire, killing well over a dozen people.

Over the weekend, the regime terrorized the city of Masaya, as more snipers killed more people.

This week there’s been rumors of pesticides sprayed over Masaya. Fake news, it turns out, but the fact it’s even suggested is alarming. The fact that many people no longer put it past Ortega to do that is alarming.

There’ve been running street battles in Granada with the alcadia set alight. That’s right, Granada. The epicenter of Nicaraguan tourism, mentioned in all those “Best Places In The World To Retire To” articles you see on International Living and elsewhere.

A US citizen, Sixto Henry Vera, lost his life on Saturday night, the first one so far, but the way things are going, surely not the last.

Ortega’s thugs have killed over 110 people in Nicaragua in the last 6 weeks. That number now includes a US citizen. https://t.co/VMAR0SKpyK

After the Mother’s Day massacre, I spent the day watching US cable news, hoping to see coverage. I saw nothing.

Roseanne Barr tweeted, Samantha Bee called Ivanka Trump a c-word and the news cycle obsessed over that. You know, the big stuff. Not the carnage taking place four countries away. Ugh.

Even after the US citizen died, still no coverage in the States. No-one is talking about this up there on the networks. No-one cares.

Sure, some of the good old-fashioned print media are coming through.

The New York Times, LA Times, Miami Herald, and others have all written about Nicaragua. I’m seeing more coverage there. God bless them forever. But nothing on TV.

I want to see Anderson Cooper in a flack jacket standing in front of a tranque in Masaya. I want cable news covering this and taking it seriously.

there are barricades in every corner and every street of masaya, the people have blocked all the exits and entrances to the city so the police can’t keep getting in.
#SOSNicaragua pic.twitter.com/ckK8n6n13s

It’s not only the Americans. I listen to BBC radio a lot. Nothing on Nicaragua at all. The BBC is covering the tragic eruption of Volcan de Fuego in Guatemala this week. As it should. But still no acknowledgment of Central America’s other eruption? Shame.

Even next door in Costa Rica, there’s barely any coverage. And lots of Nicaraguans live in Costa Rica. But hey – the World Cup is coming up. Priorities, people. Genocide across the Rio San Juan or Russia 2018? Easy choice.

I ask myself every day, what’s got to happen in Nicaragua for the rest of the region, the hemisphere, the world to give a shit? Should Ortega call Melania a c__t? Would that do it?

While the world is busy not caring about Nicaragua, it sometimes seems like many of its expats don’t care either.

Actually, that’s harsh and I take it back. It’s more like many people are in denial. But when I see gringo real estate people in San Juan del Sur underplaying the crisis and trying to sell Nicaragua as a paradise it makes my blood boil.

Every day someone asks the Facebook groups the same questions they ask us. “Is Nicaragua safe?” “Should I go to Nicaragua?”

And every day I’m astonished to see people on these groups still saying Nicaragua is fine to visit. “Come on down!” like nothing’s wrong. They use terms like “a little trouble” or “some disagreement with the government”.

I often criticize expats in Costa Rica for their denial of the crime situation, but this is taking it to a whole new level. It’s like a Stalinist-style whitewash of what is going on in the country.

We’ve received messages ourselves from people telling us to stop publishing articles about this crisis as it’s “bad for tourism”. What, worse than a bullet in the head? Jeez.

In fairness, most of these people are in San Juan del Sur and on the Emerald Coast which hasn’t seen the violence perpetuated elsewhere.

But in the early days of this revolution people were saying the same thing in Granada. I remember pictures on social media of people on the Calle Calzada relaxing and drinking like everything was cool. Those protests in Managua and Masaya weren’t touching them. Until they were. Look at Granada now.

I get where these guys are coming from. Many have livelihoods in tourism or real estate. It’s scary. As someone who’s worked in Nicaragua tourism myself, I sympathize.

But to play down genocide and tell people Nicaragua is fine is irresponsible. It’s also unethical. I love Nicaragua but I’d never tell anyone to visit right now, even to San Juan del Sur, which is my favorite beach town in the world, my own personal paradise, and a place I have friends in. I know everyone’s hurting, but come on.

Going to Myanmar was propping up the regime and giving it credibility, they said.

How long will it take for Nicaragua to go the same way?

How many deaths will it take for people to reconsider legitimizing the regime by vacationing in it? I mean back in the 80s everyone agreed that going to South Africa was wrong, didn’t they?

How could a tourist enjoy themselves sipping a cold Toña or a rum-and-coke on the beach while up the road in Managua mothers are mourning their dead children or standing outside the El Chipote jail with photographs in their hands?

Is that enjoyable? Is it worth it?

Verónica López still had no information about the condition of her 18-year-old daughter, Katherine Ruiz López, a university student who disappeared in Managua last month…https://t.co/aky1adzZIb

The shadow of a national strike is looming large in Nicaragua now. This tactic helped dislodge the Somoza dictatorship in the 70s.

But if you’re visiting Nicaragua during a national strike, you won’t have any fun. The airport will be closed. There’ll be no food in the stores and no gas. No power, no internet, no emergency services. We’re talking a total shutdown. 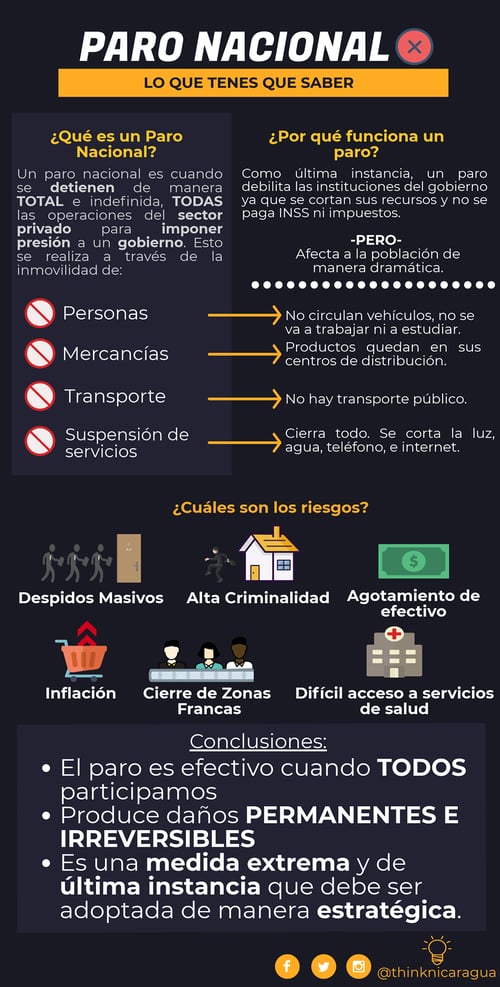 What to expect in a national strike / Think Nicaragua Facebook page

Some of this stuff’s already happening due to the roadblocks. There are gas shortages and empty supermarkets, but it’ll get worse in a shutdown. Is it sensible to visit or encourage visitors if this takes place?

If you visit, you’re another mouth to feed. You’re another person someone has to drive around, putting them at risk and wasting their precious gas. You’re a potential liability. Treble that if there’s a national strike.

As I write, business leaders are still against a national strike but like I said, things can turn on a dime in Nicaragua right now. And if it happens, it won’t be pretty.

They call a rum-and-coke a Nica Libre in Nicaragua, a copycat of the Cuba Libre except with better rum.

Wouldn’t it be better to wait until Nicaragua es libre before visiting? It might be a while but it’s worth it.

I still reckon Ortega is kaput. That’s the good news. Like despots everywhere, his time is up. He just doesn’t know it yet and unlike his buddy Mubarak in Egypt, he still has the army and the police.

But the difference between my writing those words today and writing them on May 2 is a recognition of reality. Like many others, I was in denial myself. Now I’m not.