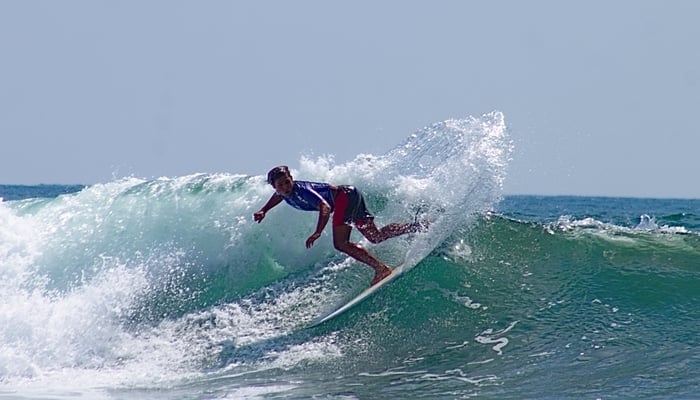 An overview of the ISA World Surfing Games starting in El Salvador this weekend. These games are also an Olympic qualifier event, determining which surfers will compete at the 2020 Tokyo Games.

This event marks the last Olympic qualifier for Tokyo 2020, pulling together the world’s best surfers to compete for national pride and medals. Plus the small matter of the last remaining 12 Olympic spots. It’s the final chance for athletes to secure a place in surfing’s debut at the Tokyo Olympics.

The World Surfing Games were originally scheduled for 2020 but the Covid pandemic prevented them from taking place, alongside the Tokyo Olympics themselves.

A year later, though, with Covid on the backfoot in El Salvador, and the Olympics looming in July, it’s all back on, and the Salvadoran government is making the most of it.

”We are very excited to do this historical event. We will have the best athletes in the world, here in El Salvador,” says Tourism Minister Morena Valdez.

Economy Minister Maria Luisa Hayem has also weighed in, talking of the tourism potential which leads to more employment. It’s hard to find a Salvadoran politician or government department not talking about the upcoming games.

The competition will feature 257 surfers from 52 countries around the world and Central America, not surprisingly, is all in.

“This World Cup is my first international event representing Guatemala. My dream is to be in the top 10 in the world,” says 17-year-old José Franklin Marroquín from Sipacate, Guatemala.

While some countries send their surfers to El Salvador with full support, others are more cautious.

Last week, New Zealand withdrew all support for its surfers traveling to El Salvador, citing the pandemic as its concern. This leaves its two competitors, Saffi Vette and Paige Hareb, traveling on their own, as Surfing New Zealand doesn’t want to be responsible for them.

Vette and Hareb stress that Surfing New Zealand has shown some solidarity with them, even after removing official support.

“They’ve still been as supportive as they can be without it being a legal matter; they helped us get the vaccines in time and all those sorts of things,” says Hareb.

Surf New Zealand needn’t worry so much. El Salvador is serious about Covid.

It was the first country in Central America to close its borders last year before even receiving a single case, and has enacted a strict set of protocols.

The Health Ministry’s Health & Bio-Safety Plan for the World Surfing Games has convinced the ISA of El Salvador’s readiness to host the event.

All competitors will need to sign a letter confirming their commitment with El Salvador’s biosecurity measures upon their entry into the country. They’ll need a negative Covid test to enter El Salvador in the first place, PLUS submit to another PCR test upon arrival, either at the airport or in El Tunco.

After that, they must isolate for 12 hours auntil their results come. Only those with a negative test result can compete. Furthermore, all competitors will need a second test seven days after their first test.

An ISA team lead by ED @bobfasulo is on an inspection visit for the @surfcity El Salvador ISA World Surfing Games — reinforcing our total commitment to the event & to the health & safety of all athletes, staff & event participants, as the final Olympic qualifier. #ISAworlds pic.twitter.com/2tIqTkveuR

Covid protocols aside, the ISA World Surfing Games offer a perfect kickstart for tourism in El Salvador after over a year of pandemic.

They also validate the effort put in by the government to market El Salvador as a tourism destination through its Surf City initiative.

Surf City is a project created to change the perception of El Salvador worldwide. The initiative showcases the best beaches in El Salvador and helps create a perception of the country as a safe destination for tourists. This perception will boost the economy and create jobs.

“The games are another proof point that El Salvador has world-class waves. If you didn’t know that, now you do! We’re thrilled and grateful to all the Olympic hopefuls who’ve made the effort to come and visit us. Our year-round waves are up for the challenge and we’re honored to host the best surfers in the world,” says Mauricio Tevez, owner of Surf and Trips El Salvador.

“It’s also a great opportunity for the community, as surf tourism drives economic growth. We have packed hotels and restaurants in El Tunco and El Sunzal. This will help the tourism community rebound after the Covid shutdowns. The games also bring more awareness to El Salvador in general, showing the world it’s an excellent, safe country to visit.”

The ISA World Surfing Games will kick off on May 29 and run until June 6.

In El Salvador, surfing is more than a sport. It’s government policy and a lifeline to boosting tourism and improving the image of the coun{“type”:”block”,”srcClientIds”:[“71b8a674-89c9-4ffd-acc3-f6c453845197″],”srcRootClientId”:””}try (by @GaldyINFO from @ElSalvadorINFO1)https://t.co/PNOTENghGB