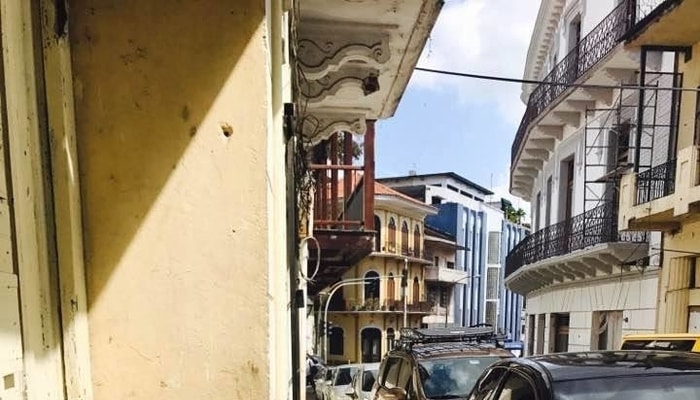 Casco Viejo is Panama City, Panama’s most historic district. Local writer Lee Elliott takes you on a tour of the lesser-known parts of this colonial jewel.

Spanish and French colonial styles, Art Nouvelle and Deco. To know Casco Viejo is to know a vibrant collection of architecture representing the best of the Americas. Here you can don a Panama hat and immerse yourself in your own colonial fantasy – or spy thriller.

Casco Viejo is a walled peninsula wedged between the Pacific entrance to the Canal and the high rises of downtown Panama City. It is subdivided into four sectors: San Felipe, Santa Ana, Caledonia, and El Chorrillo.

But not all its sectors are equal. San Felipe on the seafront is well-polished and garners all the touristic attention. Santa Ana and Caledonia lie above the high water mark of gentrification, leaving working-class El Chorrillo in the shadows beyond.

With vibrant colors and colonial architecture, full of gated courtyards, long windows, and balconies, San Felipe could be the Central American offspring of Havana and New Orleans.

This is tourist central with boutique hotels, smart bars and cafes, buzzing nightlife, and a sea view. If you listen to the somewhat exaggerated warnings of a tour guide, this is the only area you will experience. San Felipe is beautiful but sanitized.

I could wax lyrical about this lovely part of town. About how at Bajareque Coffee House you can buy Geisha coffee direct from the owners of the award-winning Elida and El Burro farms. Or about how cool the late night underground and international DJs are at Teatro Amador. About how all this is not only touristy but local and vibrant. But I am sure you read all this in the guidebooks. How you should remain in one corner of Casco Viejo is already well-covered.

More interesting is what lies above the high watermark of tourist exploration.

Santa Ana is a short stroll east from San Felipe

Once you leave the dense area of regenerated buildings, passing the shells of those still under restoration, you reach more authentic blocks of shabby buildings.

Although tourists are few, Santa Ana is safe and immersed in the bustling life of real Panama. Its namesake church, built in 1678, stands on the highest grounds of Casco Viejo and is the center of the area.

In front of the church is a square with a gazebo surrounded by huge, drooping ficus trees. Old men sit in the shade as vendors sell fruit, vegetables, cigarettes, and snacks. Here you’ll notice the tram lines that remain in place years after the last one passed through. If you are staying on the waterfront, this is where you will find the closest supermarkets. There are also alleyways full of cheaper trinkets and Panama hats than you’ll find anywhere else.

If you are new to Panama or coming from downtown, Santa Ana is a great place to begin a tour of Casco Viejo. You feel immersed in another culture straight away. And my favorite way to immerse is with a hearty feed at Café Coca-Cola!

Opposite the church and overlooking the square is this heritage icon unrealized. Café Coca-Cola is the only eating spot in the world allowed to use the corporation’s name. It’s where Che Guevara stayed and ate in the 1950s.

This place is full of nostalgic charm and, apart from the flat screen TV, frozen in time.

Café Coca-Cola is more of a diner. It won’t sell you a cold beer but it will sell you authentic, cheap, and good food from a menu little changed since Che came. Some old men eating here would even remember his visit. The service may be slow but the food is always fresh. The classic order is rice and beans with a meat of the day and, of course, a coke.

If you walk a block beyond the café, you notice a heavy police presence on the crossroads leading east into El Chorrillo.

These passive checkpoints deter tourists from taking a wrong turn. The right turn would turn left – or better still turn around. If you ever viewed the footage of Noriega’s men beating up a politician in the 80s, it was around here. Beyond lies the dark underbelly of Panama City.

El Chorrillo is where you end up if you take a wrong turn. It’s not on the list for restoration and shells of buildings and potholes abound.

What the South Bronx and the Tenderloin used to be to Manhattan and San Francisco, El Chorrillo is to Panama. It remains a workers district and is still dangerous. I wouldn’t wish to be in El Chorrillo at night wearing a Hawaiian shirt and Panama hat, scratching my head over a map and asking for directions.

Because of the risk in El Chorrillo, tourists stay in San Felipe, which is a shame because Santa Ana and Caledonia are safe and fun.

Caledonia is the section reaching north-west through what used to be Chinatown, ending at the fish market. Walk out of Café Coca-Cola, with the church on your left, and follow the old tram line. You’ll see families, children, and old men mingling with groups of tribal women in their colorful traditional dresses.

What is noticeable when you enter what was once Chinatown, is not only the lack of tourists but the lack of Chinese. That is until you reach Kwang Chow, a bastion of Chinese culture that remains after the exodus to a better area.

Surrounded by stores that all seem to sell party goods, this restaurant is a local favorite. It serves delicious, huge portions for a few bucks. This was a favorite of Anthony Bourdain’s during his visit.

The fish market (Mercado de Mariscos) has both a Panamanian and a Japanese flag on its roof. Japan bankrolled this place, which is famous for its ceviche. You can’t walk through here without teams of menu holding vendors inviting you to try their ceviche. It’s refreshing on a hot day, ceviche pairs so well with an ice-cold beer! There is also a fantastic fish restaurant upstairs if you want more than a snack.

Beyond the fish market lies a seafront park. If you walked from San Felipe, through Santa Ana via Caledonia (while avoiding El Chorrillo), you’ll find yourself here. Buy an ice cream and gaze at the ships across the mudflats while admiring the two policemen with machine guns on a motorbike – wondering how they put up with the heat with all that black SWAT-like gear on.