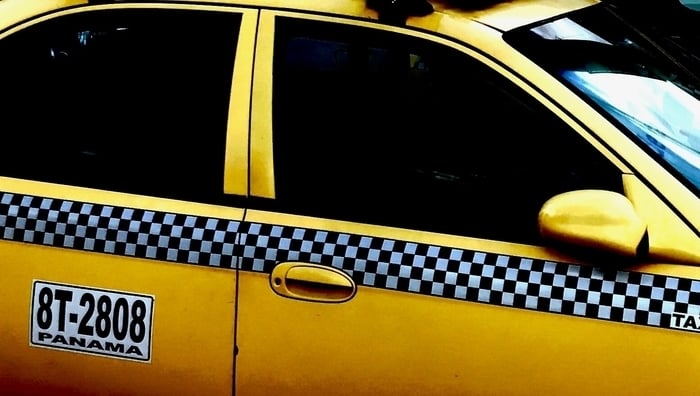 Knowing how the cabs work can make life easier in any city, even in the age of Uber and Lyft. And the taxis in Panama City, Panama are no exception. Learn how to navigate Panama’s cab culture like a pro.

When first arriving in Panama, released from immigration control, the first of many taxis became our key to getting around Panama City.

The helpful, English-speaking airport staff helped usher us to the taxi rank and quoted a price. Tired and loaded with luggage, I was happy to drop $40 on a ride into town feeling I had no other choice. Late at night, with a wife wanting a shower and two young children in tow – the last thing I was going to do was haggle. This was the most expensive ride I would take here and I didn’t care!

I had heard that taxis were cheap and easy in Panama City. Over the course of those first days, we would walk out of our apartment and jump into a passing cab. It would cost only a couple of dollars to get anywhere. You can get to any destination in Panama City for $1 to $5, with a few exceptions.

The yellow taxis that flow through the streets are easy to find. You don’t even need to find them – they will find you!

As an obvious gringo, you can’t walk down the street without the taxis slowing down and honking you as they pass to alert you that they are available for hire. Which is frustrating if you are trying to cross the road. The for-hire lights being on or off don’t seem to mean much. It is all about the honking.

You can tell the licensed yellow cabs by the numbers on the side. But once inside there are no identifiers of any kind, nor are there meters. Unless you negotiate a price before setting off, the driver will throw a figure at you at the end of your ride. This figure will be anything from embarrassingly cheap to a price that you will feel reasonable but is actually inflated.

For the first month or so we jumped in and out of many of these yellow cabs. Our experiences made us somewhat expert on the matter.

First, don’t judge the taxi by its looks. It may have beaten bodywork and a cracked window. It may have things dangling from the rearview mirror. The music may be so loud that your ears bleed. There may be stickers all over the windshield. He may drive in a way that seems erratic. This is all normal – he knows what he is doing.

The most worrying-looking taxis have often been the most honest in my experience. Often driven by poor Colombian immigrants sending money home to their family.

Some drivers are friendly and chatty. Others are silent and edgy. Some speak English. Many do not. They will often give you their number for future rides or tours. Whatever they are, the outcome will be the same. Either a fair price or an over-inflated one, and all options in-between. I have been overcharged by the nice guy, robbed by the silent guy, or treated fairly by both.

We use Uber more than taxis nowadays. The prices are set and always cheaper. It avoids all the haggling, and best of all you know who your driver is. There are Uber drivers all over Panama City within minutes from you. The drivers and cars they have provided have been bigger, safer, and more professional.

In an Uber, we can relax and not have to deal with cash. And best of all we don’t have to explain where we want to go. It’s already mapped out on their phones from my online booking. You can order the type of car you want, and even pay an extra $1 to have an English-speaking driver if you can wait a few more minutes.

Having said that, the friendly Uber driver will sometimes try and give you his number for private rides. But the only time I used that they tried to charge me three times the Uber rate for the same fare, so now I stick to the app!

Now that we have been here for a while, enjoying most of the yellow taxi rides, prices, and the conversations we have had with local drivers, I actually feel more ripped off back home.