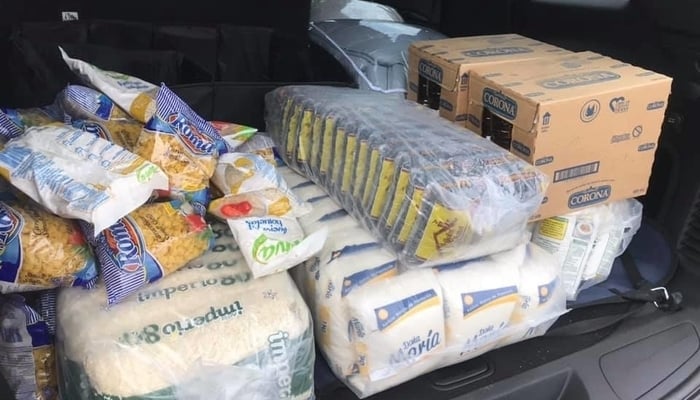 A look at how individuals and organizations in the beach town of Tamarindo, Costa Rica are uniting to combat poverty caused by the collapse of tourism due to COVID-19.

Times are hard in Costa Rica. What used to be a humming high-season full of tourists is now an almost dystopian scene. Empty streets, shuttered up shops and restaurants, and unemployment. Mass unemployment.

This is especially true in Costa Rica’s beach towns, where 100% of all jobs come from tourism in one way or another.

Tamarindo, a surf town on the Pacific coast in the province of Guanacaste is no exception.

In normal times, Tamarindo is the busiest beach town in Guanacaste. They even call it “Tamagringo” because of all the foreign tourists and residents in town.

2020 started well in Tamarindo, with two major music festivals in January bringing in the crowds to kick off the new decade. Hotels were full, from top-end boutique resorts to the hostels catering to surfers from all over the world. Another high season in paradise.

And then it all disappeared overnight when coronavirus canceled tourism.

Costa Rica is under a state of emergency with the borders closed, no tourists allowed in, and police tape blocking the beaches. Tourism accounts for 10% of Costa Rica’s GDP and over 200,000 jobs nationwide, many in tourist towns like Tamarindo. In the blink of an eye, most of those jobs are gone.

With no way of knowing when this will end, it’s fair to say that Tamarindo is in a state of crisis with people and families left destitute. This is the other side of the coronavirus crisis in Costa Rica; the effect of zero income on an entire society.

In the midst of the gloom, though, Tamarindo is seeing some light.

Local organizations are coming together to help those left destitute by Tamarindo’s tourism collapse. And they might well end up creating a much better community on the other side of the crisis.

Ron Jarman and Holly Hetzel moved to Tamarindo from Chicago in 2016 and took over the Hero Academy Costa Rica, a non-profit running after-school activities for local kids, community projects, and in particular Brazilian Jiu-Jitsu lessons.

The idea is to empower young people, people who might have fallen through the cracks in society. Getting them into Brazilian martial arts is a great way to teach personal discipline and other essential life skills.

When everyone in Tamarindo lost their jobs, Hero Academy sprang into action and now supports over forty families with meal/household packets.

“The local economy in Tamarindo is solely based on tourism,” says Jarman.

“Most people live not paycheck-to-paycheck but day-to-day at low wages of $2 to $4 per hour. So, when the tourists stopped, the impact was immediate.”

As someone already working with poorer families in Tamarindo, Jarman knew the crisis would start immediately. He knew that as the money dried up, so would the food. Sure enough, the poorest families in Tamarindo had no food within days of the travel restrictions kicking in and Hero Academy stepped up.

“Our immediate concern was for our kids in the Jiu-Jitsu program to make sure they had food. Once we knew our own were taken care of we could expand based on referrals and start collaborating with other established organizations and community leaders.”

There’s a lot they can expand on.

Like a lot of beach towns in Costa Rica, Tamarindo attracts migrant workers, people operating in the informal, cash economy, selling what they can, or living off the generosity of tourists. Many of these people are homeless, with nowhere to sleep, no families to speak of, and no idea where their next meal will come from.

Local Tamarindo tour guide Sergio Vega Marin was already preparing 60-100 plates of food a day for Tamarindo’s homeless when he met Ron and Holly but he was desperate for help.

“Holly stepped in and organized the community for this cause,” says Jarman.

“She set up a schedule for local restaurants and volunteers who are delivering two hot meals a day to help Sergio and lighten his burden. He supplements those meals and always has a hot plate for anyone that needs it. We supply him as best we can with other donations we receive of dry goods.”

So what can you do to help Heroes Academy help Tamarindo?

According to Jarman, $20 can feed a family for a week, so cash donations are ever welcome through the Heroes Academy website.

For those close by, food and other goods will help. They need dry, non-perishable food items like rice, beans, pasta, soup packets, and so on.

Heroes Academy is also distributing toys, clothes, cleaning products, and other non-food items. Drop by the academy from 10:00 AM to 12:00 PM on Monday, Tuesdays, Thursdays, and Saturdays with your donations.

“We’re in this for the long haul,” says Jarman.

“It’ll be some time before tourism returns to the area and we have an economy again. At our current rate, we can run both the homeless and family programs for ten weeks.”

There are also another couple of initiatives in Tamarindo worth mentioning here.

The Greater Tamarindo Food Bank & Help Community has done an amazing job fundraising and organizing. This is a Facebook group set up in the aftermath of the economic collapse. They act as an umbrella organization to coordinate efforts around the area. Join this group to learn more about how to help in Tamarindo.

Other local organizations are also stepping up to support local families on a more urgent level with food and supplies.

Please feel free to contact any of the above to see how you can help. They’re all working hard to help people around Tamarindo and other communities in the same way as Hero Academy.

“The people of Tamarindo are amazing,” says Jarman. “This only works because of the generosity of the community.”