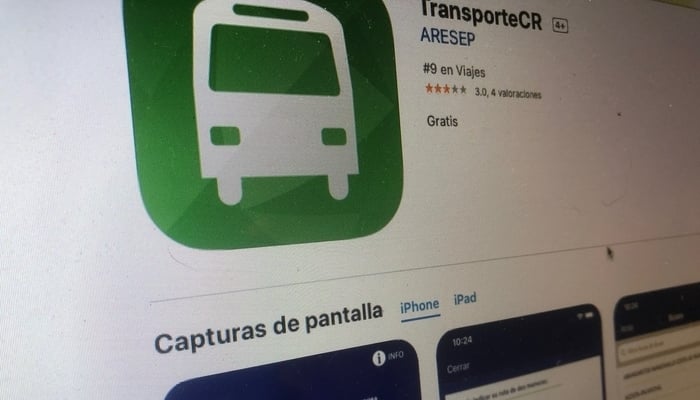 As taxis in Costa Rica come under fire for overcharging during the pandemic, a new “TransporteCR” app launched today. This will allow users to calculate the cost of a taxi ride, but won’t yet replace the traditional meter (maria).

Almost five years after Uber arrived in Costa Rica, Aresep (the Public Services Regulatory Authority) has launched an app for users to estimate the rate of a trip in a formal taxi.

Called “TransporteCR,” the app is available on Android and iOS. It’s part of a pilot plan that will eventually not only provide users with the correct price of a fare, but also, in time, calculate the cost of a journey in real time. It will also allow users to rate taxi drivers in a similar way to Uber.

The timing is good for this app, even if it does come years after Uber.

Since the GAM went on orange alert in the COVID-19 pandemic, ride-sharing services like Uber and DiDi have been mostly off the road due to the vehicular restrictions in place. Complaints have poured in from the public about red taxis hiking prices during this time.

In response, taxis in Costa Rica said that those complaining were only doing so because they were used to the cheaper Uber and DiDi fares.

Nonetheless, the complaints forced taxi drivers last week to ask the public to not “put them all in the same bag.” A tacit acknowledgment, perhaps, of the fact that overcharging is an issue in Costa Rica.

As well as taxis, the app also allows you to calculate the cost of a train ride or bus fare in Costa Rica.

When calculating a taxi fare, users will see a map like they do on Uber or Didi showing their location. They can then add in their destination and work out the price.

Aresep were at pains to point out that under the pilot plan, the app won’t replace the traditional meter (called a “maria” in Costa Rica). It should, though, help stamp out the practise of overcharging, which led many to Uber and DiDi in the first place.

An official from Aresep told CRHoy they expect some difference of 1% to 4% from what the app calculates to the actual cost on the ground.

The app is easy to use. You have to register your name, email address, and ID number. From there, you pick the service you want (taxi, bus, or train) and follow the instructions. Regular users of Uber and DiDi will find it familiar.

Since Uber started operating in Costa Rica in August 2015, it’s built up a base of around a million users, with 28,000 registered drivers.

DiDi, in operation since November 2019, had around 5,000 drivers register with them when they started.

Taxi drivers have long protested against Uber’s presence in Costa Rica and right now, full legalization of ride sharing services is some way off. Ironically, in some sort of nod to legitimization, the government will start taxing ride sharing services from August 1. This is part of Costa Rica’s new digital services tax, including Uber, DiDi, and other services like Netflix and Airbnb.

At least 40 percent of stores in Costa Rica's shopping...