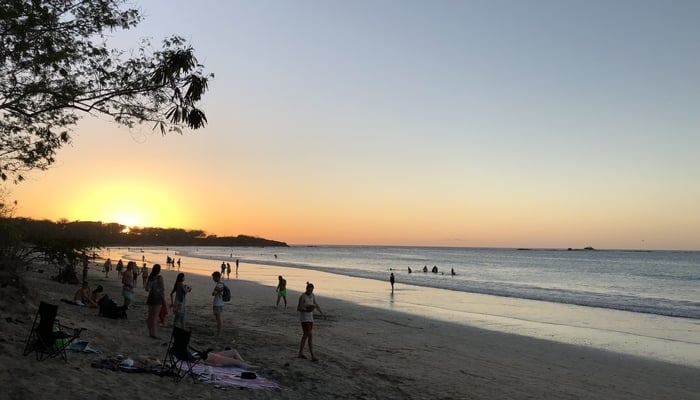 The day after Costa Rica announces it’s finally fully reopening its beaches for the first time in seven months, we look at how beach closures became a symbol of discontent over pandemic policy.

One of the more ridiculous rules set in place by the government of Costa Rica during the COVID crisis was the whole beach thing.

Back in March when Costa Rica closed its borders, it also closed its beaches. That was a bitter blow to beach communities on both Pacific and Caribbean sides. It wasn’t simply a tourism issue, but also a moral one. What on earth was wrong with sitting on the beach or going for a run or a surf?

Not listening to Govt warning, several students in the #US went for spring break to Florida and Mexico Beaches..

From a group of 70 students at the University of Texas at Austin, now 44 have tested positive for #coronavirus#CoronaVirusUSA pic.twitter.com/3nAOPSdisQ

In fairness, during those early pandemic days, when the whole world was panicking, I got it.

I understood closing the beaches over the Easter holidays, at least. Not a bad idea that weekend, given it’s Costa Rica’s biggest holiday, when everyone flocks to the coast. Fair play.

But after that? It just looked ridiculous. And cruel. Oh, and, as more evidence came out about the benefits of Vitamin D and sunshine for staving off COVID, it also looked stupid.

In April, President Carlos Alvarado justified the continued post-Easter beach closures by talking of “mass conglomerations” like in Florida and Europe.

I don’t know about you, but I’ve never seen a beach in Costa Rica packed with people like that. Not once, and I’ve been to a lot of beaches here. We just don’t have the population, for a start.

Yellow police tape cordoned off beach access all over Costa Rica between March and May. Reports came in from all over of police chasing surfers off beaches and hassling dog walkers. Like there’s nothing better they could have been doing with their time. Cops fired shots in at least one instance.

‘In Costa Rica, a surfer fresh out of the water sprinted from a police officer who fired on him from behind. In Malibu, Calif., a stand-up paddler defied beach closures to catch over 20 perfect waves, then attempted to evade lifeguard and sheriff’s boats‘ https://t.co/Sao9JTutiI

On May 1, Costa Rica authorized a limited opening of gyms, beauty parlors, theaters, and other businesses. All while keeping the beaches closed.

In mid-May, the government announced beaches could reopen from 5:00 AM to 8:00 AM weekdays only. But only as long as you kept moving while on them. No sitting down, no hanging out, no relaxing.

For beach communities, already on their knees, this measure achieved little to nothing. Restaurants also began reopening in mid-May, but with beaches closed from 8:00 AM, trade remained anemic at best.

It was around this time that Costa Rica’s entire pandemic policy began to get super-confusing and complicated. The mid-May reopening of beaches until 8:00 AM did not include beaches in national parks, some of which could also open at that time.

To business owners in beach communities, this seemed unfair. It’s here that the first rumblings of discontent began in Costa Rica. On June 27, the government allowed beaches to open until 9:30 AM, including weekends.

It felt like a kick in the teeth to beach communities who by now, were convinced the government was ignoring them. Rumors of the government reopening the beaches, only to get a measly extra hour were the final straw.

“When the beaches opened again from 5:00 AM to 8:00 AM, it was a step in the right direction,” said Guanacaste restaurant owner Christie Bettinsoli at the time.

“We were ready for clients to return, and started serving breakfast and lunch. We were slowly getting some clients back, and then the government said that only beaches in national parks could open all day.

Bettinsoli and others like her in beach communities all over Costa Rica took to the streets in late June. These protests marked the start of major discontent with the government that continues to this day.

June and July were tense on Costa Rica’s beaches. On one hand you had a government trying to reactivate domestic tourism while keeping beaches closed most of the day. And on the other, a seething underswell of discontent growing in beach communities.

During this time, the government kept getting in the way of itself.

Around this time, mayor Tobias Murillo of Garabito, the Pacific coast canton that includes Jaco, rebelled when the government labeled his district “orange alert”.

“To all the media in this country and the country in general, we want to express our disagreement with the measures that the Ministry of Health has taken. What do they want? Lead us to ruin, lead us to bankruptcy? We were the first canton to close the beaches and we are also going to be the first canton to rise up. If they want war, we will have war, because it cannot be that they continue to charge us,” said Murillo.

Things couldn’t continue like this much longer. Something needed to happen.

On July 23, something happened.

Gustavo Segura, the tourism minister announced Costa Rica would reopen its borders to a limited number of countries effective August 1. Oh, and as a part of that, beaches could now open until 2:30 PM instead of 9:30 AM.

It was a step in the right direction, sure. But there still seemed to be no reason on earth to close the beaches at 2:30 PM.

By now, COVID-19 was circulating openly in Costa Rica. Would being on a beach, in fresh air, in sunshine, after 2:30 PM really make a difference? You could go to a shopping mall but not the beach? The whole issue defied sense.

But whatever. 2:30 PM was better than 9:30 AM. Like victims of Stockholm Syndrome, ever grateful to their masters, beach communities grabbed 2:30 PM with both hands.

Little by little, Since August 1, Costa Rica has increased the number of countries eligible to visit. After Canada and the EU came a few countries who barely visit anyway. So they kept the 2:30 PM beach closure, continuing to hamstring beach communities and baffle everyone.

Then last week, Costa Rica said all US states could enter from November 1.

Reopening the country to the biggest source of tourism would be a non-starter with beaches closed after lunch.

Especially as by now, most of the Central America and Caribbean region was also open, with no such restrictions. Plenty of other countries with beautiful beaches open all day.

And sure enough, yesterday it happened. They announced that from October 15, all beaches could open until 10:00 PM in the week and 8:00 PM at weekends. Sanity at last.

Opening the beaches up is the single-biggest thing the government can do for coastal communities. Well… aside from paying the unemployed the bonos protegeres they’re owed and providing incentives to broken tourism businesses to get them back on their feet. That’s another article, though.

It’s these communities who’ve taken the brunt of COVID’s impact. They’re the communities who’ve seen the most job losses, the most poverty. Opening the beaches for them was one of the last things Costa Rica could do to get out of its own way in reactivating tourism. And the government owed beach communities that.

Costa Rica still needs to simplify the insurance and COVID testing for foreign travelers before it really stops self-sabotaging itself.

But opening the beaches back up all day is a massive step forward for everyone.

And it’s not only about international tourists. This is the best way to reactivate local tourism. And it’s the best thing possible for those living at the beach.

There’s a long way to go before normality returns. But with their beach access returned, coastal communities can start salvaging back some of their lost pura vida.

Now can we reopen the city parks and plazas too, please?