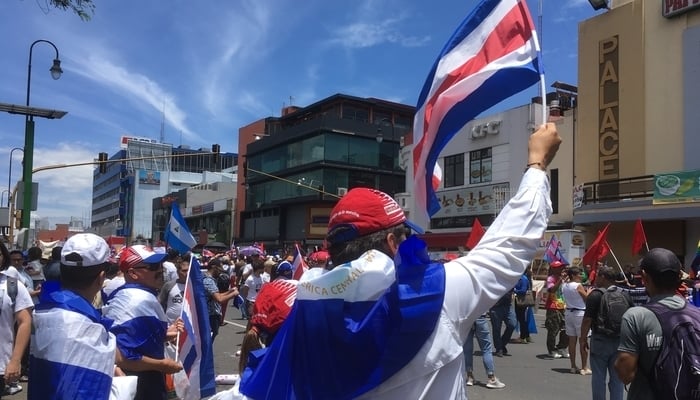 Costa Ricans, Nicaraguans, And Others March For Peace And Solidarity

Costa Ricans and Nicaraguans marched in solidarity through the center of San Jose on Saturday to oppose and counteract the violence against Nicaraguan refugees carried out by protestors the preceding weekend which shocked and outraged many observers.

Alongside tricolor of Costa Rica and the blue and white of Nicaragua, rainbow banners representing the LGBT community and Colombian and Venezuelan banners also flew high, as folk came together in a good-natured march to the Plaza de La Democracia from both San Pedro and the Parque Merced, scene of the previous week’s violence.

There were even a few gringos in attendance, as my cargo-shorted, pasty-legged, baseball-capped presence can attest to.

The organizers, a group called For Refugees In Costa Rica, considered Saturday’s march a triumph in that a great deal more people showed up to it than to the previous week’s anti-immigrant protest. According to the police, there were at least five or six times as many people than the anti-immigrant march, and I’d estimate at least two or three thousand people in the Plaza de La Democracia.

Carlos Sandoval, an organizer of the event, welcomed marchers and offered an extended hand on behalf of Costa Rica to Nicaraguan immigrants, whose “work helps to develop the country”.

Costa Rican President Carlos Alvarado took to social media to thank and acknowledge those who came.

He quoted Nicaraguan poet Ruben Dario (“When a man truly loves, his passion penetrates everything and he can cross the earth”) and said Saturday’s march was a reminder that Costa Rica was a nation of love and solidarity, something I forgot myself after the previous week’s scenes.

Now and then we put together a little photo essay, usually of people or of an event.

We covered the 2017 Independence Day parade in Escazu, Costa Rica and the initial round of the presidential election also in Escazu (hey, I live in Escazu).

This weekend’s Grand National March for Peace and Solidarity in Costa Rica is an event worth capturing, to show the world the true face of this country in contrast to the troubling scenes we witnessed before.

The images below reflect the true Central America.

Outside of Panama and Belize, Central America was once one country, one people. We are small and it behooves us to stick together as a region, not to tear each other apart.

Let Saturday’s march be an opportunity.