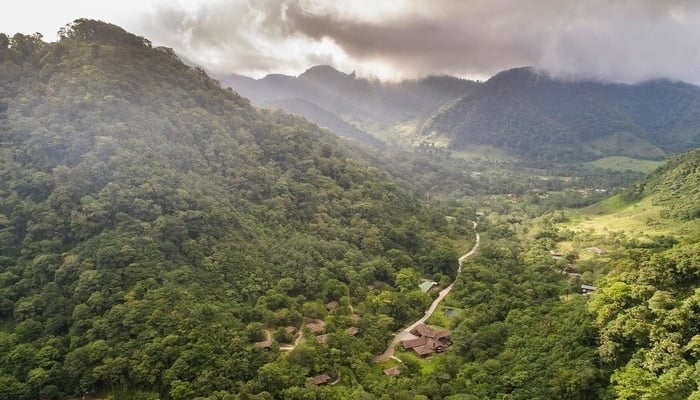 Secret Spots: Seven Places in Costa Rica People Never Heard Of But Should Have

Now tourism is making a tentative, slow return to Costa Rica, the big question is, in an age where people still want to stay as far away from each other as possible, where should you go? Are there still any secret spots in Costa Rica?

When people talk about Costa Rica as a tourist destination, most of the time they’re talking about a few places. It’s a handful of destinations in Costa Rica that accommodate the lion’s share of tourists.

All those images you see of people surfing, ziplining, sloth-spotting, fishing, river rafting, and all that fun stuff are most likely in Manuel Antonio, Jaco, Arenal, Monteverde, Papagayo, or Tamarindo.

Even places that make their name for being Off The Beaten Path like the Caribbean, Tortuguero, Santa Teresa, Isla del Coco, and Drake Bay are still kind of famous. Sure, they’re an effort to get to, but they’re still on the tourist map.

So where can you go in Costa Rica that no-one’s heard of? Here are seven places even many Ticos will find it hard to locate on a map. They’re not all difficult to get to. They’re just off the beaten track in the truest sense:

On the other side (if you’re coming from the Central Valley) of Poas Volcano, on the edge of the often-overlooked Juan Castro Blanco National Park, is the community of Bajos del Toro.

Here you’ll find waterfalls, lots of waterfalls. You’ll also find virgin cloud and rainforests filled with more nature than you can fumble around trying to photograph. What you won’t find are lots of other tourists on the trails. They’re all in Monteverde instead of here.

Our favorite hotel in this area is the El Silencio Lodge. In fact, El Silencio could be the best reason to even come here in the first place. It sits on its own 500-acre patch of jungle and waterfall paradise. This place is perfect for those who want to experience a pre-tourist boom eco-adventure but want to do so in style.

We’re not talking about that Puerto Viejo here. Not the Puerto Viejo Talamanca of Caribbean surf and rasta vibes, although we love it there too.

What Puerto Viejo Saripiqui lacks in beach vibes and surf culture, it makes up for in pristine rainforest and jungle river life. Plus it’s a small city in its own right with an interesting history.

One day, Puerto Viejo de Saripiqui might become a new adventure center for tourists, like La Fortuna is now. But for now, this sleepy little city will carry on doing its own thing with tourism more as a backdrop than something upfront and center.

Everyone know La Amistad National Park (well, on a map, at least), but few have been. This massive park is so big, it takes two countries – Costa Rica and Panama – to manage it. Hence the “International Park” moniker. La Amistad is also a UNESCO World Heritage site, one of three in Costa Rica and five in Panama.

So why is this place on this list if it’s so famous? Well, as we said, few people have actually been here. It’s one of those places that seems more myth than reality. Think dense jungles with indigenous communities accessible only by river or by hiking for days. There are still parts of La Amistad International Park where non-indigenous humans have never explored. This is proper Tarzan territory.

There’s nowhere to stay in La Amistad. What you can do is arrange a stay in one of the indigenous communities bordering onto the park. That way you’ll see a Costa Rica that hardly any Central Valley Ticos have ever experienced. But don’t expect any luxury.

True adventure seekers can try to make it Alto Telire, a tiny community that’s as close to Costa Rica’s Wild West as anywhere. If you have the money, you can get there by helicopter. If you don’t, it’s a three-day hike. Take your pick.

One for the surfers here. Punta Burica is the most southern point of mainland Costa Rica (Isla del Coco is further south). It sits at the end of a long, thin peninsula sticking out into the Pacific and shared by Panama. I’ve always wanted to go here but never have. That’s okay, though. Most people have never been here either. Punta Burica is the end of the road beyond the end of the road. Indeed, the road runs out way back and part of getting here means driving along the beach. No-one’s gonna see you, though.

Unless you want to stay on the Panamanian side of the peninsula, you’re going to be camping at Punta Burica. The closest hotels are up the coast in Punto Banco or Pavones, two super remote places in their own right. Compared to Punta Burica, though, Punto Banco and Pavones are metropolises. If you like some measure of comfort, best stay in the “metropolis” and hire someone with a boat to bring you down to the end of the world for a day.

When people think of Matapalo in Costa Rica, most of the time they think of Cabo Matapalo down at the tippy tip of the Osa Peninsula. And while it’s true that Cabo Matapalo is beautiful and remote, it’s not entirely forgotten. Not like Playa Matapalo is. Playa Matapalo is easier to get to than Cabo Matapalo. Especially now the coast road between Quepos and Dominical is operational. Most people pass it by, though, whizzing past on the new (ish) highway.

Those who hang a right at Matapalo while traveling south along the coastal road will find a small beach community like you can imagine, say, Tamarindo was back before condos and clubs.

They’ll also find miles and miles (and miles) of unbroken, sandy, palm-lined beaches that go on forever. With hardly any people, either. All the people are either in Manuel Antonio to the north or Dominical to the south. Or they’re trying to find their way to Cabo Matapalo, having forgotten this place existed.

I first visited Playa Coyote back in 2000. It was, oddly enough for a place off the beaten path, one of the first beaches I ever visited in Costa Rica. How I made it here is a story for another day, but what I found at this spot on the Nicoya Peninsula, somewhere between Santa Teresa and Punta Islita, was a vast expanse of sand, one campsite, and one place to eat.

I remember the electricity being out that entire first weekend in Playa Coyote and having to drink warm beers all the time.

Although things have changed somewhat in the 20 years since that first visit, they haven’t changed that much. A bustling new version of Santa Teresa or Samara, Coyote is not.

The place is long popular with the good people of Jicaral and Ticos in the know from elsewhere. But you won’t find too many gringos here, at least not to saturation point. Playa Coyote is one of those spots where you feel that soon… one day soon… development will come. But not yet. Not yet.

Costa Rica isn’t blessed with much lake life. Nicaragua is “The Land of Lakes and Volcanoes” and Guatemala has Atitlan, Peten Itza, and others. But Costa Rica? Not so much. There’s Lake Arenal, of course, but after that, one struggles to think of another. Until you remember the Laguna Don Manuel.

Laguna don Manuel is accessible off the Cerro de la Muerte – kinda before you get on to the “de la Muerte” – highway between Cartago and San Isidro. Think of the Dota area, around there.

Don’t expect a vast expanse of water surrounded by volcanoes like you see everywhere else in Central America, though. You’ll be disappointed if you expect that.

What you’ll get is a small, cute lake surrounded by pine trees where you can hike and camp and get back to nature. And as it’s only an hour out of San Jose, you can drop the camping part if you want.

There are so many secret spots in Costa Rica to visit if you want to avoid the main tourist spots.

I mean right now, there’s no-one here so even the tourist spots are empty, but you know what I mean. If you’re looking for a place that even most Costa Rica experts don’t know much about, you can still find them.

What are your favorite secret spots in Costa Rica? We’d love to hear about them if you don’t mind breaking a confidence!