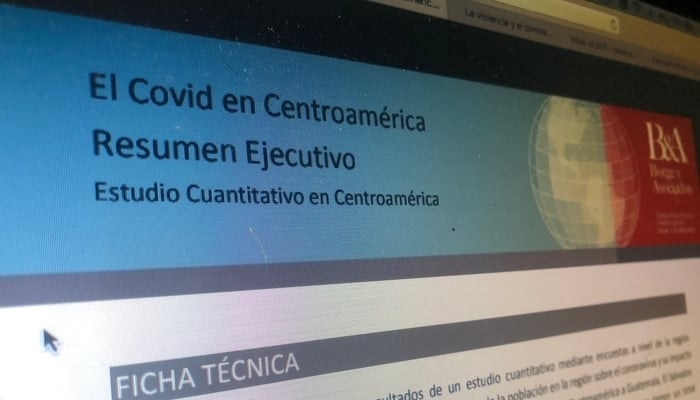 Last week’s COVID-19 in Central America survey brings up a few surprises on how people perceive the current pandemic and its impact.

One of the least-reported aspects of the current pandemic in Costa Rica is the results of a survey released last week, stating that Costa Ricans are more concerned about unemployment and the economy than the virus. Other talking points include the massive approval rating of Nayib Bukele in El Salvador and Nicaraguans’ unhappiness with their pandemic measures.

The goal of the Borge y Asociados survey was, “to measure the perception of the Central American population about the coronavirus and its impact on people’s daily lives.”

The survey covered Costa Rica, Panama, Nicaragua, Honduras, ElSalvador, and Guatemala (all Central America except for Belize). Borge y Asociados interviewed 1,246 people for the survey between April 20 and June 19.

It’s worth pointing out that because of the fluidity of the situation, opinions can change. For example, opinions about COVID-19 in April or May might be different now depending on events on the ground.

Borge y Asociados themselves point out the dangers of generalizing these results as “national opinion.” At the same time, it’s undeniable that these results are interesting for observers of life in Central America.

So let’s take a look at them.

The first question asks respondents whether they think things are going in right direction in their country or not.

Breaking it down country-by-country, it becomes clear that El Salvador has the most faith. 75.4% of Salvadorans say they’re on the right track. Guatemalans are also optimistic, with 68.5% of people saying “right track” and only 11.6% saying “wrong track.”

The same survey shows that Nicaraguans are the most unhappy with the direction their country is going in right now. pic.twitter.com/iZHHWBQqNm

Nicaraguans and Hondurans are the most dissatisfied with the direction of their country, with a respective 60.3% and 57.2% of respondents saying things were on the wrong track.

Costa Rica and Panama both approve of the direction their countries are taking, although with less enthusiasm and more uncertainly than El Salvador and Guatemala.

The next question is more interesting. It asks respondents what the principal problem facing their country right now.

A recent survey conducted in Panama, Costa Rica, Nicaragua, Honduras, Guatemala, and El Salvador reveals Costa Rica to be the only country in Central America where people are more worried about the economy and unemployment than COVID-19. pic.twitter.com/4aAhPnSRZ6

I say this is surprising, because the Costa Rican press and social media barely cover this.

Elsewhere, Panama and Guatemala are the only other countries where the economy worries people more than the virus. Although both countries have COVID-19 as the biggest percentage in their polls, unemployment and the economy combined beat that. Panama also registers the highest amount of worriers about corruption.

Nicaragua, Honduras, and El Salvador all say COVID-19 is the principal problem facing their country. Another interesting fact here is that a large 11.9% of Nicaraguans label “other” as the main problem. Speculating, could that “other” be the Ortega dictatorship and the political situation?

The next question is more personal. It asks what the principal problem is right now for “you and your family.”

Here, across the board, unemployment and the economic situation win out, with health way down in the pecking order. 42.7% of Costa Ricans say their biggest personal worry is unemployment, indicting large-scale job insecurity. 28.9% of Ticos say the economic situation in general. That’s 71.6% of Costa Ricans worried about jobs and the economy, far higher than any other country in the region.

The other countries all show a percentile in the 50s on unemployment and the economy. It seems clear Costa Ricans worry more about this than their neighbors.

Results were evenly matched over which problem was affecting their family most in Central America. Guatemala, El Salvador, and Nicaragua said “the economic situation.” Costa Rica, Panama, and Honduras said “unemployment.” pic.twitter.com/PJK0mYghkk

One of the most interesting questions is about how Central America’s presidents are managing the COVID-19 crisis.

Here, according to the survey, El Salvador’s Nayib Bukele wins hands down. He has a 94.6% pandemic-handling approval rate from Salvadorans. Alejandro Giammattei of Guatemala – a medical doctor himself – also receives a massive 89.2% approval.

Juan Orlando Hernandez of Honduras, who’s recovering from COVID-19 himself right now, receives the worst vote. 39.9% of Honduran respondents saying he’s doing a bad job. Taking that into context though, 38.3% of Hondurans approve of Orlando. The president with the lowest approval rate (30.8%) is the Nicaraguan dictator Daniel Ortega.

Carlos Alvarado and Nito Cortizo of both get around 50% of respective Costa Ricans and Panamanians approving of their pandemic handling.

These are the main talking points of the El COVID-19 en Centroamerica survey.

The survey also asks about various aspects of life during the crisis, like eating out or traveling, and if the info available about COVID-19 is satisfactory.

One other interesting point is when Borge y Asociados asks if government measures against COVID-19 contagion are effective.

The majority of countries say yes, they are, except for Nicaragua. Here, only 31.7% of respondents agree that measures taken to fight the virus are effective.

To read the full results of the survey (in Spanish), please find a link to the .pdf here on the Borge Y Asociados website that you can download and save.

Should the Guatemalan Economy Reopen on July 27 or Not?

To open or not to open: The Guatemalan economy eyes...

One of the biggest talking points about the COVID-19 crisis...

As the United States of America celebrates its 244th birthday,...