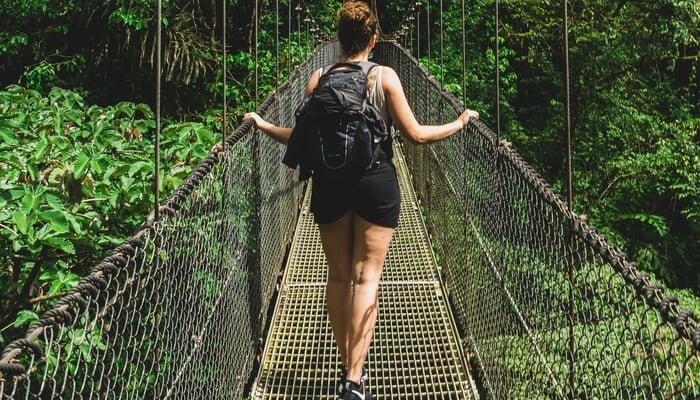 Why Tourism is Important (A Defense of Tourism in Costa Rica)

A defense of tourism in Costa Rica on perhaps the strangest World Tourism Day since its inception.

Over the past few months, since COVID came, I’ve seen a lot of backlash towards tourism on social media, especially in Facebook groups connected to Costa Rica, where tourism is all-important.

I have to admit, the vehemence toward the tourist industry has surprised me.

As someone who’s worked in and around tourism for around half my life, I guess I always thought we were the good guys. At least compared to other industries that foreigners tend to get involved in down here.

Lots of gringos end up working in boiler rooms scamming old ladies in Indianapolis for their life savings. Or they come down and work in sports books extracting $$$ from desperate, degenerate gambling addicts. Some even end up selling real estate.

I thought working in tourism was a cut above all that.

Tourism was always something I was proud of until the pandemic came and people started saying good riddance to it. It’s been rather disheartening to have your industry, your niche, put into the same bracket as pimping. Makes you wonder what the point of your life has been.

They’ve said tourism is for lazy, unintelligent people. They’ve said we’re all a bunch a wealth-over-health mercenaries who couldn’t care less about real people. We’ve been told we’re here to rape and pillage the country. I’ve seen ALL these comments about the tourist industry since the borders closed.

There’s something awfully hypocritical about foreign expats, most of whom came to Costa Rica as tourists in the first place (or still live as tourists), now bitching about how they don’t want tourists here.

Pull your heads in.

It must be awfully nice to live in your gated community on your lifelong pension and pontificate on how Costa Rica needs to stay closed. Perhaps you don’t realize that much of what puts the “pura” into your “pura vida” life you spend hours posting on Facebook about derives from tourism.

I see you all, now we have some tourism again, complaining about how this US state shouldn’t come in while this one should. You’re hypocrites.

The first commercial flight from the United States to Costa Rica since mid-March just landed: https://t.co/lgGsoKxSb9

Equally, there’s the same hypocrisy coming from a lot of Ticos, especially in the Central Valley.

Many work in the public sector, enjoying a full salary, paid for, in part, by tourism revenue. Before the borders (partially) reopened on August 1, they were urging the government to stay locked down and to not let any foreigners back in for… how long, exactly? Forever?

Since the borders (partially) reopened, they’ve been all over the comments in the Casa Presidencial’s daily briefing urging the government to not let anyone else in.

Don’t you care about what’s happening to your fellow citizens in the countryside and on the coasts?

Perhaps you will when your fellow citizens flock to the Central Valley looking for non-existent jobs, creating mass homelessness and social unrest. Or when the government can’t pay your aguinaldo anymore.

When that happens, you’ll be on the streets, ignoring the stay-at-home advice you’ve been dishing out to everyone else.

You could be out on the streets now, or planning to be, protesting against the recent IMF proposals that might put up your taxes and freeze your salary. Which is fine. I fully sympathize. But don’t do that and then say it’s foreigners bringing in COVID.

The fact is, if you live in Costa Rica, you’ve benefited from tourism.

It doesn’t matter if you can trace your family back to the founding of Cartago in 1563 or if you came here because of an International Living article in 2015. You’ve benefited.

Whatever you do for a living in Costa Rica, you’ve benefited from tourism. Even if you do nothing for a living. I can’t think of a single sector in this country where tourism hasn’t touched at all, even indirectly.

Tourism has lifted up and enhanced every aspect of life in Costa Rica.

It’s insulting to the hundreds of thousands of people now living hand-by-mouth on the donations of food banks to have people tell them their jobs don’t matter and their industry doesn’t matter.

A lot of this derogatory nonsense about tourism in Costa Rica comes from the fact that the industry comprises some eight percent of the economy. I’ve talked before about how ignorant I am about economics, but even I can see this is a lot.

Eight percent of the economy doesn’t make the remaining 92% unrelated. Much of that 92% is related to tourism. For example, how many Costa Rican eggs do you imagine tourists consume?

Look, I know there’s a real, valid argument for not relying on tourism so much as a country.

We’ve definitely leaned too much on tourism over the years, and if we hadn’t have done that, maybe there’d be less people lining up at the food banks.

But let’s face it, we’re a small country with few natural resources.

I’ve seen the tourism detractors say we should go back to agriculture. Give me a break. To make Costa Rica an agricultural player – to the point where it doesn’t need tourism – you’d need to up production.

That means more land given over to agriculture which means less rainforest and national parks. Would you like to see Haiti or Brazil-style leveling of our natural resources for the sake of agriculture?

Or perhaps we can try to manifest ourselves into some kind of offshore banking or tax haven, some kind of Central American Singapore.

We could attract corporations from all over the world to Costa Rica to the point where no-one cares about some backward industry like tourism anymore. Problem there is, doing that would increase our dependence on the whims of foreign businesses. It would also require the type of low-taxation policies Costa Rica has never been interested in pursuing.

Should we start building cars? Get into some heavy industry? I’ve yet to see a viable alternative to replace tourism as the main source of revenue for Costa Rica that will keep the pura vida, well, as pura as possible.

Our options are limited.

The fact is, tourism has worked in Costa Rica.

Elsewhere in Latin America, people flock from the countryside to the cities looking for work, creating massive shanty towns and slums. That’s a characteristic of cities all over Latin America because there’s no work outside said cities. Tourism has enabled Costa Rica to avoid much of that.

Tourism has allowed people in rural Costa Rica to set up their own businesses and become prosperous.

They never needed to decamp to the capital city to find work like they might well have had to do elsewhere.

“The only way we get whole as an economy is helping to foster and restore travel.” Too many jobs in the travel industry have been lost. Those have to come back for the global economy to fully recover, according to @adam_sacks at @OUPEconomics / @TEglobaltravel #SkiftForum

It’s patronizing to them to assume the owners are all greedy foreigners taking advantage of the locals. Most hotels are Costa Rican-owned, hiring Costa Ricans.

Hotels owned by foreigners are mostly boutique. The foreigners who own them aren’t “corporations.” They’re good people invested in, and as in love with their communities as the locals they hire.

Local ownership like this means most of the money generated by tourism in Costa Rica stays in the country. Last year, that amounted to some $4 billion.

The theme of this year’s World Tourism Day is “tourism and rural development.” I’d say that’s been the successful theme of Costa Rican tourism for years. We’ve been at the vanguard of that theme for decades.

Congratulations to the United Nations for finally cottoning on to the importance of what we’ve always been doing.

For years, Costa Rica has been the poster child for sustainable tourism. It’s been a success story, not a failure. It’s made Costa Ricans prosperous and proud of their country’s natural beauty.

“Tourism is a lifeline for many rural communities. The sector is a leading source of employment, particularly for women and youth while it also provides opportunities for territorial cohesion and inclusion.” SG @pololikashvili‘s message on World Tourism Day. pic.twitter.com/ucp6lLE1w2

Right now, tourism in Costa Rica is on its knees but people still want to come.

I see people asking all the time on social media when their country or US state will open up. People still love Costa Rica. They still want to come here and spend their money. Money that local communities with near treble-digit unemployment now need.

Instead of bitching about how tourism is lazy and ignorant, and somehow beneath us, we should welcome them with open arms.

It’s now time to reopen the country to everyone (with sensible protocols) and bring tourism back.

Our tourist industry has nothing to be ashamed of on this World Tourism Day and no-one in Costa Rica should forget that.