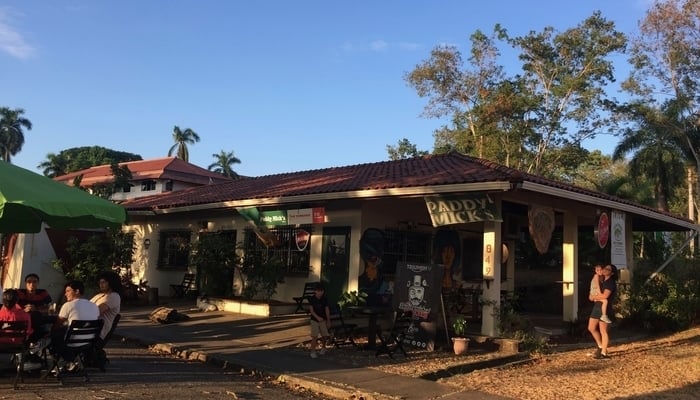 Clayton, Panama was once Fort Clayton in the Panama Canal Zone. Now it’s La Cuidad de Saber, “The City of Knowledge”. That said, Lee Elliott wasn’t feeling very knowledgeable when he walked there from the Mirador Locks in the blazing sun, family in tow, to find an Irish pub…

“It’s not far away. We could walk that.” Bold words back at the Miraflores Locks in Panama which now found us trekking along a vegetated hard shoulder trapped between a highway and tall military grade fencing instead of sitting in an air-conditioned Uber.

The concept of “not far away” being relative to the obstacles you encounter on the way, I conclude Panama City is not for pedestrians.

Meanwhile, our own current obstacles are clumps of turf, ditches, fumes from the Corredor Norte, the oppressive heat, and that damn huge military grade metal fence.

We’re on the wrong side of the perimeter fence around a former US military base, Fort Clayton.

Now known simply as Clayton and “The City of Knowledge”, the base was once part of the Southern Command Network. It used to oversee and guard the Panama end of the old US-ran Panama Canal Zone. 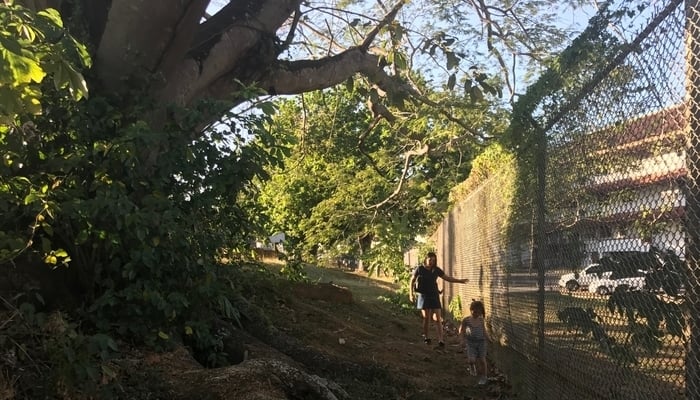 The wrong side of the fence around Clayton, Panama / Lee Elliott

Once a ten-mile-wide corridor flanking the canal from Panama City to Colon, the Panama Canal Zone (and the Canal itself) reverted to Panamanian control in 1999.

Fort Clayton became Clayton and has since taken on a hybrid role of a university town, or a mash-up of middle-class suburbia meets Silicon Valley understudy.

Clayton is residential, innovative, and academic – albeit made up mostly of bomb-proof concrete surrounded by a fence that would make Donald Trump jealous.

Wishing I was wearing a sombrero in this heat, I trudge on in the way only a man can when committed to a bad decision in front of his wife and children.

But we’re already in too deep having walked this far. My role now is to act confident and pretend we aren’t dehydrating.

Through the fence, civilization taunts us.

If I was alone, I’d consider scaling the fence, although this was impossible. Even if it was possible, I’d still think the guards would shoot me – despite the lack of guns or guards. What I’m saying is the fence still looks foreboding, fort or no fort.

An hour after leaving the Miraflores Locks and crossing the railway and highway that, like the canal, link the Pacific and Caribbean, at last, I spot an entrance in the distance.

They used to have guardhouses at these entrances, but no longer. In fact, one of these ex-guardhouses is the reason for this mad, sweltering hike.

The guardhouse at the southern entrance is now an Irish bar and restaurant called Paddy Mick’s. This is our destination for today.

I’m eager to reach Paddy Mick’s having built up a raging thirst.

I croak encouraging words to my family behind me. “Look! We’re almost there!”

It’s like there are cacti growing on my tongue and I hope the sight of the entrance isn’t a mirage. Images of Bear Grylls drinking his own piss float through my head. I don’t want to drink my piss. I want Irish stew and a pint.

It’s a touch surreal to enter the area once known as Fort Clayton. The layout of the space around what would once have had heavily controlled gates makes me want to reach for my ID like I don’t belong.

We’ve arrived in the center of what is now called La Ciudad del Saber – ‘The City of Knowledge’.

Made up of universities, world organizations, and promoting the cross-pollination of education, business, tech, research, and innovation, the ideals of this area are hard for me to grasp.

With the World Scout Organization, UNICEF, the Red Cross, World Food Program, and the universities of Florida, Iowa, Saint Louis, and Pennsylvania among many other academies and organizations, I can only imagine they spend most of their time in meetings trying to work out how to work this synergy.

Further into the ex-base and beyond the university campus feel of this entrance is the residential heart of Clayton.

Clayton looks more like a US suburb than anywhere else in Panama City and has a 1950’s suburban America thing going for it.

No high-rise buildings, well-groomed lawns, pools, a lake, families, kids, and the occasional dog on a leash. All in the greenest area of the city with well-maintained roads lined with palm trees. 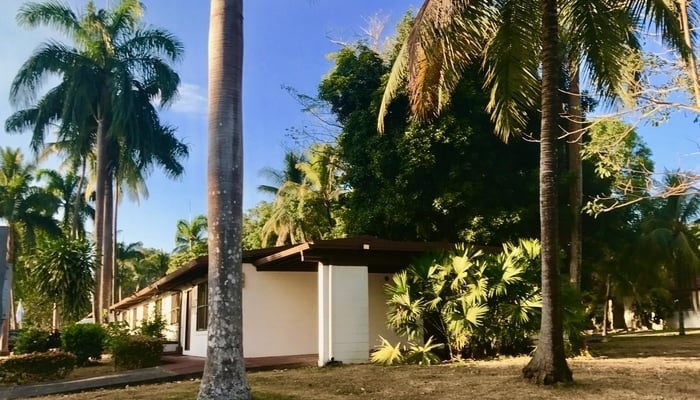 Apart from the lack of volcanoes and beaches, this could be a Hawaiian campus village.

Clayton is home to some of the most exclusive villas and best private schools in Panama. More exclusive still is Clayton Village and the Embassy Club – gated enclaves within an enclave.

Most who live here are expats and the employees of the various institutions and companies based here. It’s a tropical-suburbia with a low-density population, shopping centers, bakeries, cafes, and spas. An attractive area for young professionals, families, and retirees alike.

We continue our thirsty walk, the Holiday Inn towering in the distance as our marker lying beyond the southern entrance.

These palm tree-lined streets and uniform, whitewashed buildings overlook the canal on the left. Many buildings remain unchanged and at any moment I almost expect an armed guard or parked Humvee to be on any given corner. The trees are beautiful though and we enjoy some well-needed shade.

All of a sudden one of the children cries with delight. 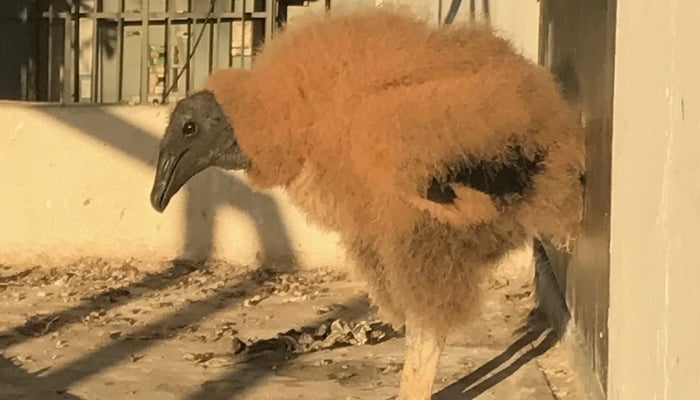 They have come across one of the weirdest avian sights I have ever experienced. A huge, awkward chick standing in a stairwell. It’s like I’m playing a bit part in a David Lynch movie. The perfect vision of 1950’s America and then this weird bird. Are the sun and this long walk getting to me?

By now my wife Karen is carrying Holly, our exhausted youngest, in her arms. My son Jay shuffles behind me like a trooper. A glance at Waze on my phone confirms we are almost at the doors of Paddy Mick’s and salvation.

Before we know it we’re there. It sounds like a beach club at spring break.

Glasses clinking, a live band pumping, and the murmur of conversations inter-spaced with laughter and screams. None of these people walked here from Miraflores along the highway.

I don’t have the energy for this, I think. Another day maybe but not now.

But these sounds of euphoric consumption are coming from La Taberna Del Canal, not Paddy Mick’s. Somewhere I now want to visit at some point.

With a lively, student, Spanish vibe, this terraced bar/restaurant is famous for its sangria, giant seafood paella, and roast sucking pig. It has great reviews but today the mission is Paddy Mick’s.

We cross the road and down into the old guardhouse. I imagine before La Taberna opened Paddy Mick’s used to be the party hub.

In contrast to across the street, Paddy Mick’s is empty apart from a bunch of locals at a table outside. Perfect!

Founded by a lad who used to work on the base, exposed wooden beams in the roof create a rustic vibe and the kitchen and bar are sectioned off in a corner. Very boxy, it has a sports club, or student union bar feel about it. 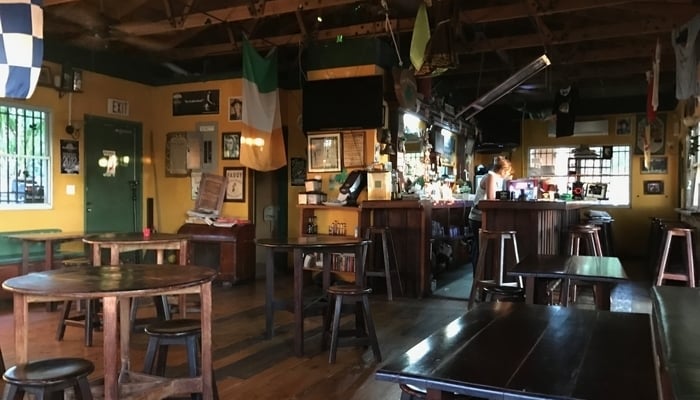 The usual Irish motifs hang on the wall, and a solitary bartender tends social media on her phone. Straight away we drink about a gallon of iced water each before turning to the menu.

We ended up enjoying good Irish stew, fish and chips, and some hearty IPAs.

I pull out my phone. Now about that Uber…