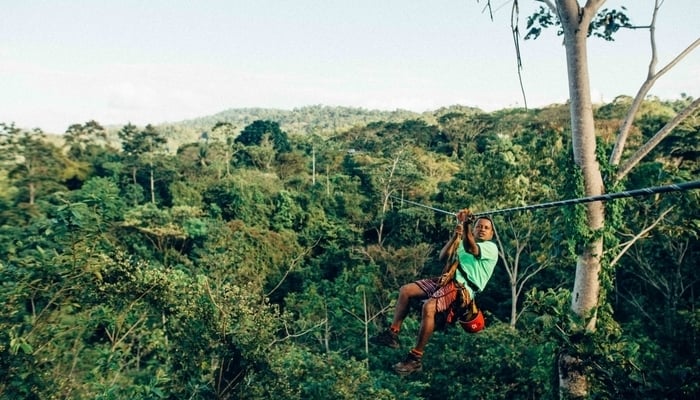 Costa Rican Tourism: How Will the Upcoming High Season Play Out?

As Costa Rican tourism gears itself up for it’s weirdest high season yet, we look at what to expect.

It’s been a funny old year in Costa Rican tourism. Funny crazy I mean, not funny haha. No LOLs going around after months of border closures. But November is coming, which marks the traditional start of high season in Costa Rica.

November is Thanksgiving month in the US. In a normal year, lots of American tourists take advantage of the holiday to come to Costa Rica.

It also marks the transition from the rainy season to the dry season. The weather gets better and the country gears up for the peak “summer” months. And after this godawful year, we could all do with some summer sunshine and vacation time, right?

2020 is far from a normal year, though. So how will tourism play out this high season? Will they all come back?

From November 1, Costa Rica is open to all US states, which is a positive move. And the US downgrading its travel advisory from 4 to 3 is also a great help.

But will it make a difference?

Joachin Rodriguez from Stay In Costa Rica, a vacation rental and property management company operating at Los Sueños Resort in Playa Herradura, is pessimistic. Or, depending on his starting point, maybe’s he’s optimistic.

He believes hotel occupancy this high season will will be half that of a regular high season.

Speaking to La Republica today, Rodriguez believes Costa Rica was too late in opening up to all US tourists.

I don’t disagree with him. Costa Rica dithered and dallied over letting in Americans, it’s most important market by far. While Costa Rica banned the US and then let Americans trickle back in on a state-by-state basis, other countries opened up in full.

No other country in Central America did what Costa Rica did. When they opened, they opened for everyone. Ditto the Caribbean.

Uncertainty in the US over whether and when Costa Rica would allow travelers back or not this year will lead to a 50% drop in high season occupancy, according to Rodriguez.

“Our industry has been totally forgotten,” he says.

“The late opening to the US market has sacrificed our year-end season and much of the peak season.

“Our projections and those of others in the industry estimate that this peak season will close 50% below historical levels.”

“We’ve had cancellations because the insurance and COVID test for large families make the trip more expensive, in a destination that was already expensive,” he said.

“In many US states, the 72-hour test is impossible to guarantee, especially when it comes to the end of the year week.”

National tourism has been great these past few months he added.

It’s kept Stay In Costa Rica afloat as locals opted to social distance in their bubbles at Los Sueños. But it’s not enough to replace tourists coming from abroad. Not nearly enough.

American tourism represents some 80% of Stay In Costa Rica’s income. Local tourism can’t compete with that.

Del Mar is one of out top rentals in Los Sueños Resort. Currently on of the only communities that allows the use of their gym.
Reservations 2661.9300 or WhatsApp +506 8510 7427 or by message. #stayincostarica #lossuenosresort #lossuenos #costarica #vacationrentals pic.twitter.com/rr5Fqrfccy

Bexon is the COO and co-owner of the Namu Travel Group, which includes the travel agency Costa Rican Vacations.

“Realistically, I’m looking at this high season being 30% of last year,” he says.

“Flights will be a bottleneck, and thus expensive. And then the cost of insurance and COVID testing will be a high barrier to entry. I think high-end hotels will see 40% of regular high season occupancy at best, and lower-end hotels 20%.”

Bexon was positive about one thing, though. Demand and desire to travel.

“Demand is still high,” he said.

“We’re still getting a lot of inquiries. Despite the virus and the economy, Americans want to travel and we’re still selling vacations. The only roadblocks keeping us from selling more vacations are the entry requirements. That’s what’s holding us, and Costa Rican tourism back.

“But have no doubt, people want to come to Costa Rica.”

Our #TravelConsultants are #EXPERTS for a reason. They live & work in #CostaRica & #travel the country often. However, they are a diverse crowd, hailing originally from the US, Canada & Europe. They understand your travel expeditions & needs! https://t.co/3EKop1HVuw pic.twitter.com/1rdg9UdPaB

It’s clear the insurance policy, COVID test, and general lack of certainty over the past few months have been detrimental.

To be blunt, Costa Rica’s government has got in its own way time and time again. Where other countries have made their reopens easy (or as easy as possible under the circumstances), Costa Rica’s has been complicated. Needlessly so.

It doesn’t need to stay complicated, though. There’s no way on earth Costa Rica – or anywhere – will have a “regular” peak season this year. Not going to happen.

But it doesn’t need to be as bad as the experts say. Costa Rica could still claw something back from this high season.

Isn’t it time to simplify tourism to Costa Rica? As long as people are tested and insured, there’s no reason to ban this or that country. Open it to all or close it to all. Keep it simple. Cos this thing is complicated enough already.https://t.co/q6M4sOtSep

All they need to do, and we’ve been calling for this for months, is simplify things. Look at what Panama’s doing, what Belize is doing, what Guatemala’s doing.

Drop the insurance requirement. No-one else has this. Why does Costa Rica need it if, say, Belize doesn’t? Allow antigen rapid COVID tests instead of only the PCR version. If Panama and Guatemala do this, why can’t Costa Rica?

And finally, set up rapid COVID testing at the airport. Costa Rica did it for that very first flight from Madrid back in August as a publicity stunt. Do it again now, but properly. Charge for it. Panama, Belize, and Guatemala all do this, so why not Costa Rica?

If Costa Rica can put in place these measures over the next month or so, it might well surprise itself. It might well have a better high season than anyone expects and set itself up well for a post-pandemic 2021.