Costa Rica cancels the 72-hour PCR COVID-19 test required for entry while we offer another thank you to Gustavo Segura. Oh, and we look at the reasons for the move.

I wasn’t planning on writing this article today. I had another one lined up about the same subject, but not this one.

Over the past few weeks, I’ve been collecting screenshots from Costa Rica‘s many expat Facebook groups, where travelers have been left angry, disappointed, confused, and oftentimes stranded by the entry protocols.

I’ve got tons of them. Every one of them a story about how Costa Rica’s 72-hour COVID test rule and/or insurance requirement has impeded travel. You’ll see a few of them posted throughout this article. 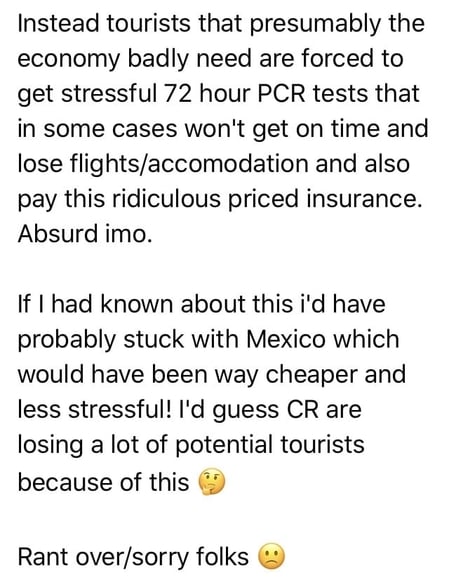 So my story today was going to be about the onerous requirements to enter Costa Rica.

It’s a theme we’ve touched on a lot these past months. We’ve complained about original insurance and the debacle around that. The insane drip drip drip of foreign countries and US states got our gander up.

There’s been all sorts of confusions, quite frankly not seen elsewhere. We’ve begged the government to make the process easier.

For a long while it seemed although Costa Rica was allowing tourism, it didn’t really want tourism. At least not at government level.

I’ve never seen a country’s – any country – premium source of revenue treated with so much disdain by a government. It’s been truly insane, especially as so much employment in Costa Rica relies on tourism.

But then came Gustavo Segura, a tourism guy through and through.

It’s fair to say he’s done wonders in the little time he’s been in office. He only started in July, remember. I bet this three months feels like three years to him.

Since he started, he’s convinced strong opposition forces in government, strong pro-lockdown, pro-border-closure elements to back down on so many different and complicated rules.

Gustavo Segura has made tourism during this pandemic simpler, something we asked for months ago.

And so, for the second time this month, minister, thank you. 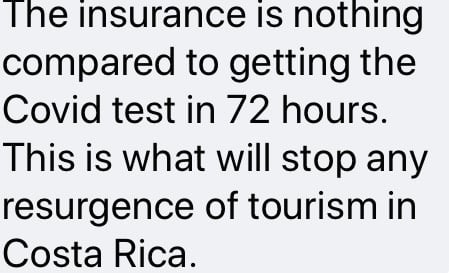 But let me retrace my steps a bit. I never said what we’re thanking him for.

Well, unless you’re not in Costa Rica or you live under a rock, you’ll know that today Costa Rica cancelled its requirement for tourists to provide a negative COVID test taken within 72 hours of arrival. The changes will take effect from October 26.

I must admit, I knew some kind of announcement was on the cards today. I knew Segura would be at the government daily COVID press briefing to say something.

But in all honesty, I thought he would either announce an end to the insurance requirement. Either that or he’d say rapid tests would be allowed from now on. Or he’d announce Belize/Panama/Guatemala-style rapid testing at the airport upon arrival.

I never dreamed he’d ditch the testing altogether. This is fantastic news and puts Costa Rica ahead of the rest of Central America.

Dropping the testing will, and this is the reason why Segura made the announcement – go a long way towards reactivating hundreds of thousands of jobs in Costa Rica. Especially jobs in beach and tourist areas decimated and laid waste by the border closures.

It was always a kind of stupid rule.

I mean, citizens and residents never needed to take the test to enter. They had to quarantine, sure, but tourists were still sharing planes and airport space with them.

Now, by the way, citizens and residents no longer need to quarantine upon arrival, either.

And then, as mentioned by Segura in today’s announcement, the premise of COVID testing people before they travel is ridiculous, anyway. Well, he didn’t use those words exactly. They’re all mine.

He just quoted a recommendation from the Pan-American Health Organization earlier this month which said, “Given the performance of currently available testing technology, conducting or requiring COVID-19-related testing of prospective or incoming international travelers is not recommended as a tool to mitigate the risk of international spread.”

A roundabout way of saying COVID testing travelers is pointless.

It’s one of those tools, rather like lockdown itself, designed to make governments look like they’re doing something, but in reality not doing anything. Call it a sign of desperation. 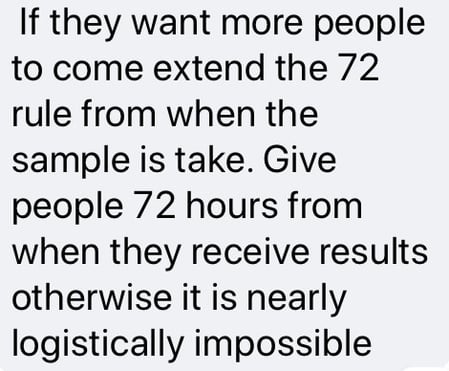 Put it this way. A lot of other tourist economies don’t need a COVID-19 test to enter.

Most of Europe, for a start. Mexico. The Dominican Republic. And many other successful tourist economies require easier-to-get COVID tests. Most of the Caribbean requires a test taken within five to ten days before arrival, not 72 hours.

The 72-hour rule was all but impossible, and a major roadblock to reactivating Costa Rican tourism, and the jobs that come with it.

No other country in the world apart from Peru has lost a higher percentage of its jobs than Costa Rica during this pandemic. The economic fallout of this thing has crippled Costa Rica to the extent we’re we seeing real civil unrest in the Land of Pura Vida.

I’m not naive enough to think that Costa Rica’s economic woes are the fault of COVID.

We were in trouble long before this came along. But COVID has accelerated Costa Rica’s fiscal problems, for sure. Cutting off a country’s main source of revenue at the knees will do that.

So anything – anything at all – Costa Rica can do to promote itself as a tourist destination again and make it easier for people to visit should be a no-brainer.

He said, “If we don’t signal immediately that Costa Rica is open for business and welcoming tourists, if the ICT doesn’t start promoting Costa Rica to the world again, we run a very, very high risk of losing the high season.”

Dropping the COVID test is a great signal to the world that Costa Rica is open for business again and ready to take on its regional competitors. 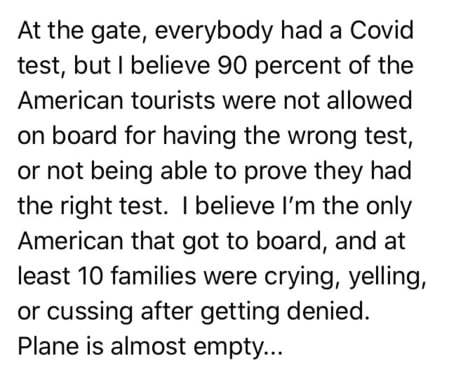 Now don’t get me wrong, there’s still work to do.

Costa Rica needs to convey this message to the airlines so we don’t see confusion on that end. Something tells me we’ll see reports next week of airlines not getting the memo and banning passengers without a test. We’ve seen a lot of that type of thing already.

And most important of all, Costa Rica needs to drop the insurance, or at least change it to take out the clause about self-quarantining in a hotel.

This prohibitive cost of this insurance, as Joachin Rodriguez from Stay In Costa Rica says, causes cancellations to his business like the COVID test did.

So it’s six of one and half-a-dozen of the other. Gustavo Segura made massive steps today. We’re getting there for sure, thanks to him. But we’re not there yet.

How Ford is working to promote tourism and travel around...