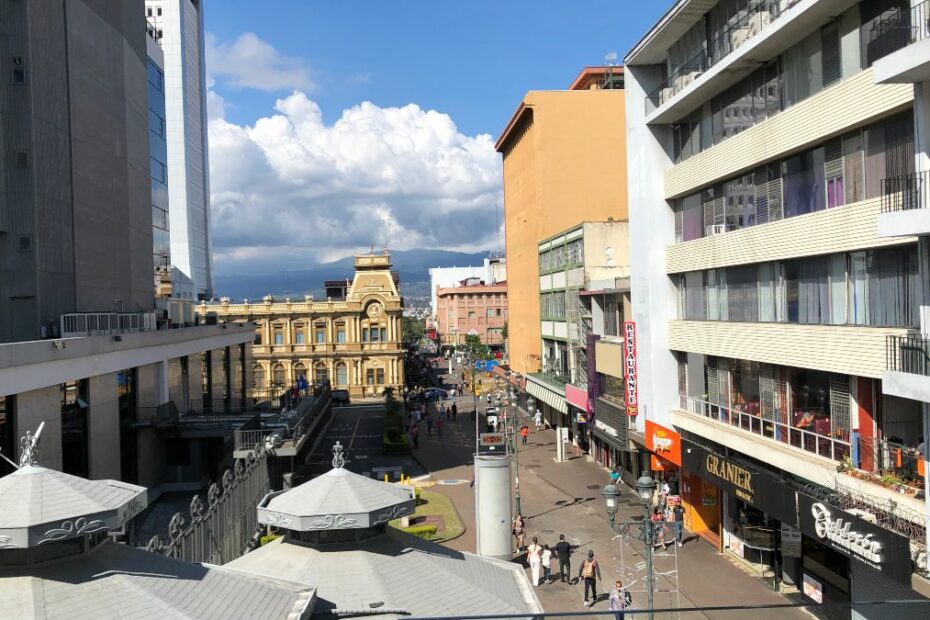 My First Impressions of Life in San Jose, Costa Rica

A newly-arrived intern from the United States talks about her first impressions of life in San Jose, Costa Rica. This article contains affiliate links, where make a small commission if you purchase anything after clicking, at no extra cost to you.

I recently arrived in San Jose, Costa Rica from Charlotte, North Carolina to live in the suburb of Escazu for a while.

After dropping off my bags at the place where I’ll be staying, I went to lunch at a local soda. A soda is a typical restaurant and the place to find the most authentic Costa Rican food.

I had chifrijo, a dish combining three staple foods in the Costa Rican diet: rice, beans, and pork. This is then topped with avocado and cilantro and served with tortilla chips.

Over the course of our lunch, the skies turned a dark, stormy gray and proceeded to dump out buckets of rain. As I soon discovered, because it is the rainy season, this type of weather is pretty much the daily routine.

At first, this news bummed me out. When I pictured Costa Rica, I pictured beautiful, white sand beaches and sunny skies. Not gray skies 24/7, with a slow and steady rain drizzling down.

But as my first day turned into my first week, it became clear that neither of these perceptions was the full truth.

Actually, the mornings are warmer, with blue, sunny skies often greeting me when I wake up. The heat is never unbearable. Compared to the humid North Carolinian summer, this is a welcome break.

The best part of the day is the mid-afternoon showers. Like I saw on that first day, the sky turns gray, thunderclaps, lightning strikes, and the rain comes down hard.

The rain does a wonderful job of cooling the city off. By the time the storm subsides, you’re left with the most idyllic temperature. You know, that kind where you could be fine in either a tank top or long pants and a light sweater.

My love letter to the climate aside, I soon found myself adjusting to other aspects of life in San Jose.

Spanish isn’t exactly a strong suit of mine. Especially as I haven’t practiced in over a year. While many travel companies will say knowing Spanish isn’t necessary in Costa Rica, I disagree. Granted, it’s more than likely because I’m living here instead on vacation. I have to do practical things like go to grocery stores. I don’t get to order off menus at fancy resorts. Boy, have I been struggling.

Luckily, most Ticos (at least the ones I’ve encountered) are patient souls. No-one has gotten frustrated with my lack of Spanish. They will always repeat things or speak slower for me. Sometimes I get wild gestures. It goes on like this until I finally understand the answer to the question I asked in my garbled Spanish.

One place where I experienced all this in full effect was at the Pavas Feria. This was a major highlight of my first week.

Most neighborhoods in San Jose have their own ferias or open-air markets. Like my local farmer’s market back home, the Pavas Feria pops up every Saturday morning at around 6:00 AM. You have to get there pretty early to get the freshest produce, but it’s definitely worth it.

The prices are unbeatable, and I felt like a true local as I strolled through the stalls. For around US$10, I bought all I would need for the week ahead: three oranges, two avocados, a box of strawberries, and ten bananas. I also found someone selling homemade jams. I got the blackberry flavor (my peanut butter and jelly sandwiches have never been better).

My favorite part was trying food from the stalls cooking up delicious Costa Rican fare. Before I could walk two feet into the feria, I paid less than a dollar for a fresh, green coconut, which the man sliced right in front of me with a machete. He handed me a straw and I went on my way, happily sipping on the fresh coconut water as I browsed the rest of the market. Fate directed me to a stand selling fresh churros. I bought six of these tiny fried dough sticks covered with sugar and called it breakfast.

On Sunday, I woke up early and went to a local French bakery to enjoy a croissant, a latte, and some reflection time.

This was another a highlight of my week, and something I will definitely be making part of my Sunday routine.

When I arrived at the cafe at around 8:30 AM, it was amazing to see the tiny place completely packed. By 10:30, most people were gone. I couldn’t help thinking about my American friends, who would never eat breakfast on a Sunday until at least 10:00 AM.

Something that I have definitely had to adjust to this first week is the Costa Rican schedule. It’s pretty typical for most Ticos to get up with the sun, around 6:00 AM, but then go to bed earlier. The sun goes down here at around 6:00 PM. While this took some getting used to, I’ve settled into a nice routine here where I get up earlier to enjoy the morning.

After I got back from the bakery, I decided to venture into downtown San Jose.

Unlike most tourists who stay close to the attractions, we had to figure out transportation into the city.

The one huge downside to life in San Jose has got to be transportation. I don’t have a car and no intention of getting one. Even if I did, one look at the traffic and the roads would turn me off driving around the city.

As soon as I arrived, someone told me to avoid taxis. Especially as I speak hardly any Spanish. You see, nothing in San Jose has an actual street address. Only an approximate location.

When you’re taking a taxi, the driver either knows the place you’re going to or he doesn’t. And if he doesn’t, well, then it is up to you to play navigator. And then there’s the problem of fake taxis, which are a lot more common here than in the States.

I tend to avoid taxis like the plague, which leaves me with the bus system, Uber/DiDi (both an excellent alternative to taxis), or my own two feet. Buses in San Jose seem to run by word of mouth. That’s right — no map, no schedule. No fancy app on your smartphone to track the bus’s movement. Ticos seem to know what bus to take and when to take it.

There’s a bus stop near our house. Our landlady said if we want to go downtown, then we should hop on the bus and take it until it doesn’t go anymore. Those were pretty straightforward directions, even for me.

We walked out of the house at around 11:00 AM and waited 15 minutes for the bus to pull up. When it arrived, we hopped on and paid the small fee (a little less than a dollar). Then we were sitting in cramped seats, heading towards downtown. The bus dropped us off in the Coca-Cola district, which was home to a Coca-Cola plant back in the day. Now it’s a chaotic mess of honking buses and humanity.

We joined the throngs of people walking the narrow sidewalks and picked our way through vendors selling everything from sunglasses to fruit, stumbling through the city like we were blind. We had no plan, nothing, in particular, we wanted to see.

There’s not a ton to do in the city when it comes to sightseeing.

There are a few museums and landmarks like the Teatro Nacional, but not much else. After navigating ourselves out of Coca-Cola, we got to Avenida Central, the main street that is open only to pedestrians. It was surprising to me how few tourists I spotted. It felt like downtown San Jose was a place only for locals.

We found a street performer set up on a section of the main avenue. As I looked around the decent-sized crowd, I realized how out of place I felt. We continued walking around, stopping anywhere that looked interesting.

The Edificio de Correos — San Jose’s post office — was one that struck me as beautiful. We wandered over to Parque Central, which is more of a plaza than a green space. At one end of the park is the Catedral Metropolitana (Metropolitan Cathedral). We went inside only to discover a full-blown church service going on. The interior was incredible. I had to stare down at the brightly-colored Spanish-tile floors and snap a quick picture.

Our trip only lasted about two hours in total, but it was all I needed as an introduction to downtown San Jose. I’d like to return again soon to go to one of the museums or catch a show at the theater.

All in all, it was quite the whirlwind of a first week. But I am settling in and learning to love my new life in San Jose. I can’t wait to do more exploring!