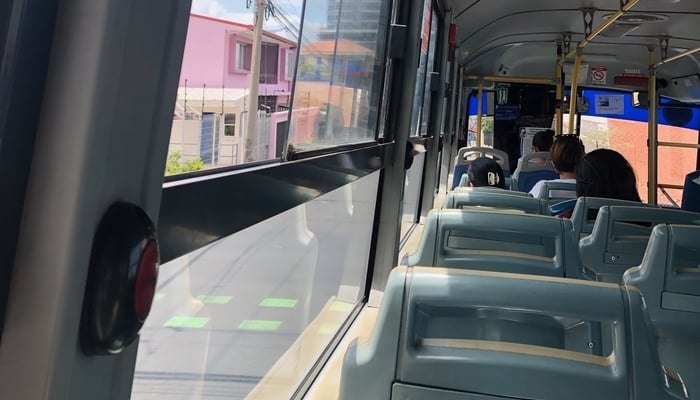 An Expat Talks Buses In Costa Rica: The Good, The Bad, And The Ugly

Buses in Costa Rica are the prime method of public transport for most of the population. Irish expat Alan Prendergast has been using them for years to get around San Jose and the country as a whole. Here he talks about the good and bad about bus travel.

For most of my time in Costa Rica, I haven’t owned a car, meaning I’ve had to rely on Costa Rica’s public bus system.

In many countries, local municipalities run public transport within a regulated system. But buses in Costa Rica, have no central authority to speak of, and no regulations governing them. Instead, individual bus routes get tendered out to something like 300 different companies.

Hundreds of companies all providing different routes make for a chaotic bus system.

And to make matters worse, no central hub for buses exists. Instead, you get lots of small terminals scattered all over San Jose.

Often this means the rules of logic get lost.

A good example of that lack of logic is the Gran Terminal del Caribe.

One of the larger bus terminals in San Jose, The Gran Terminal del Caribe services Limon, Puerto Viejo and other towns on Costa Rica’s Caribbean coast.

But if you want to go to Cahuita – a decent-sized town between Limon and Puerto Viejo – you need a different terminal. The Cahuita terminal is on the other side of the city. Go figure.

I learned this the hard way when I went to visit a friend in Cahuita not so long ago.

And that’s the intercity buses in Costa Rica. In the San Jose metropolitan area on regular city buses, it’s a total nightmare.

Especially for foreigners and others who don’t know the area at all.

There’s no way to travel direct from one side of the city to the other on a single bus.

A journey from Santa Ana in the west of San Jose to San Pedro in the east will involve at least two buses. And then you’ll have a 2km walk between stops when changing buses. Most bus stops are not well-marked, and there are no signs showing you the routes. No timetables or anything like that on any of the bus stops.

One positive advantage I can think of is the cost.

Bus travel is very cheap in Costa Rica. It costs me less than a dollar to travel from San Pedro to downtown San Jose, a journey of about 15-20 minutes.

Traveling from San Jose to the international airport in Alajuela costs a little more than a dollar for a 20km journey. And the intercity buses are reasonable, too. San Jose to Tamarindo in Guanacaste, for example, costs about $10. That’s for five-hour, 260km ride across to the other side of the country.

Another positive is the frequency (which kind of negates the need for timetables, I suppose).

Buses leave all the time during the working week. You can expect an average of 4-5 per hour on any route. Some busier services run through the night. Weekends can be sketchy though, and also public holidays like Christmas and Easter.

The buses range from clean and modern to old school buses that rattle, bounce, and shake your bones.

But if you’re thinking charming, Guatemala-style chicken buses as you see elsewhere in Central America, you’ll be disappointed.

The old rattlers in Costa Rica churn out billowing black clouds of smoke, polluting the hell out of the atmosphere while providing none of the visual painted delights of the chicken bus.

That there doesn’t seem to be any kind of oversight with pollution is an issue for me.

I want a basic standard for pollution in general, and emissions in particular. Especially as Costa Rica paints itself as a ‘green’ destination, always talking about its ambition to become the world’s first carbon-neutral country.

It’s hard to see how they can achieve that ambition when you’re choking on noxious fumes.

Most of the bus drivers themselves are decent sorts who work long hours for little money.

They work 10-hour shifts six days a week. It can be dangerous, too. Buses sometimes get robbed, as crackheads try to steal the fare money from the drivers.

As I said, most bus drivers are decent. But like in all jobs, you’ll encounter a fair number who can be abusive or unhelpful.

Over the years, I’ve had a few run-ins with them for their attitude.

A recent example was when I was fumbling for the correct change while trying to balance my son in the other arm. In the ten seconds it took me to get the coins from my pocket, the driver slammed the door in my face. There was no reason to do that, but that’s what you have to expect from time to time.

Something else to expect is bus drivers taking it into their own hands whether to bother to stop for you.

Sometimes, if a bus is full, crammed to the max with people, I understand not stopping to let more on. But I often see half-empty buses whizzing by bus stops which I know they should stop at.

It’s like the driver can’t be bothered to pull in. He’s got better things to do.

This happens a lot at the bus stop in Sabana Sur by the park on Ruta 27 for westbound buses to Escazu, Santa Ana, and so on. If your bus doesn’t stop, you’re s**t out of luck until the next one. Grrr.

Another long-standing issue on buses in Costa Rica is the sexual harassment of women.

Almost every woman I know has stories of situations they’ve faced while on the bus. Things are getting better now, though. The growth of smartphone use has helped curb a lot of antisocial behavior.

The bus system in Costa Rica is far from perfect and there is plenty of room for improvement.

But if you have a basic grasp of Spanish and you’re happy to walk between stops, it’s fine, despite my grouching about it. It’s served me well enough in my time here.