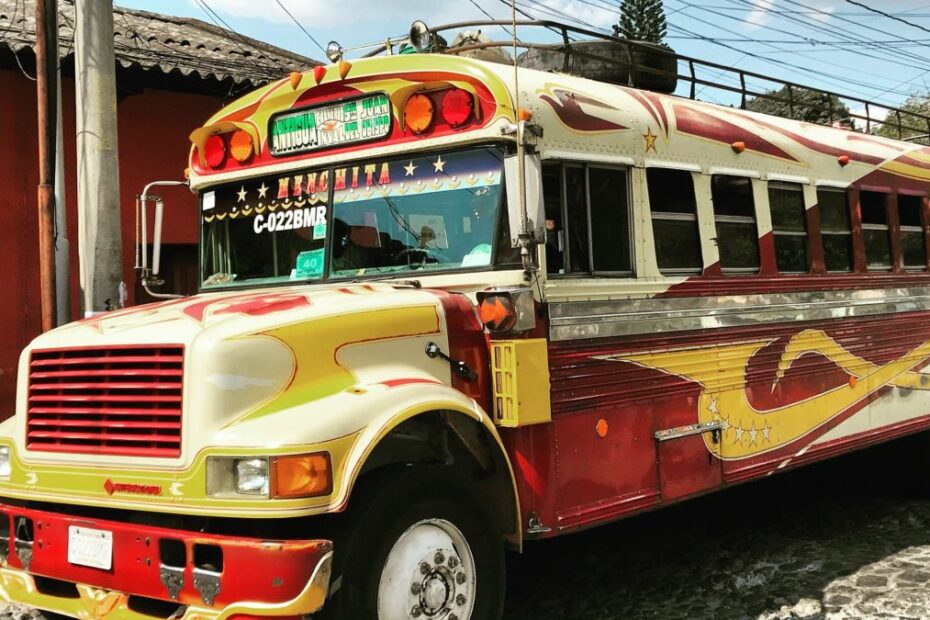 Most people in Guatemala get around on the chicken bus. Local writer Jake Stamp takes you on a journey from Antigua to Chimaltenango.

Those who grew up in North America may remember the Bluebird buses that brought them to and from school.

Cast your mind back to a dull, yellow-colored bus with two rows of unpadded bench seats. And a chugging diesel engine, accordion doors swinging open.

All this sounds familiar, doesn’t it?

But once retired, those school buses did not go into the long goodnight to rust away in scrapyards. No, instead they went south to start new lives in Guatemala.

This is due to the propensity of passengers to bring a basket of chickens on board with them, either on their way to – or home from – the local market.

Purchased by companies with names like Esmeralda, Primorosa, Esperanza, Orellana, and Flor de Occidente, these majestic old transports take on a new form of life. Gone is the dull yellow forever. Transformed into chicken buses, they display multi-hued exteriors of fantastic brightness. Greens, reds, blues, whites, and chrome wherever they can attach chrome.

Inside, the refurb guys add luggage racks. They also paint religious slogans above the driver’s seat in an attempt to curry divine favor.

For some reason, the Looney Tunes cartoon character Tweety Pie is often painted, as if the canary himself is voicing the religious adage. A forgiving god might excuse a passenger for questioning whether the prayer “God is all-powerful and may he bless this transport” loses solemnity if it sounds like Tweety.

All aboard the chicken bus!

From Antigua, it doesn’t matter if a traveler is taking a short trip to nearby Pastores for a new pair of cowboy boots, or the long ride to the Mexican border. He heads to a dirt lot behind the municipal market where dozens of chicken buses sit in a herringbone pattern. According to some inscrutable scheduling system unfathomable to the casual observer, buses pull out of their parking spots and the assistant driver (ayudante) begins to yell out the ultimate destination.

Passengers board and hand their large baggage to the ayudante who climbs a small ladder at the back to place the luggage on top of the bus. After a few more minutes of yelling, the bus rumbles across the dirt road. And then, in a cloud of diesel fumes, it’s off for another run to any one of a few hundred destinations.

How much does it cost to ride a chicken bus?

There are no written tickets and no posted prices. After a few minutes of driving, the ayudante squeezes down the aisle collecting fares.

The traveler – wedged on a bench seat between a tiny Mayan woman of an age he estimates to be somewhere between 50 and 100, and a small boy with a live turkey on his lap – tells the ayudante his destination. The ayudante quotes a price and the traveler somehow extracts his wallet and produces a twenty 20-quetzal bill.

As the fare to Chimaltenango is only twelve quetzales, he is a bit concerned to receive no change. There’s no way, though, to pursue the ayudante due to the boy and his turkey blocking access to the aisle. But all fears subside when the ayudante reaches the end of the bus, and in a feat of remarkable memory, returns to the front, dispensing change to all those that paid with large notes.

Large speakers are set above the driver. One of them blocks Tweety (proclaiming that “Jesús Es Mi Co-Piloto”). The driver slides a bootleg CD into the stereo and cranks up the volume to the max.

The first song is Bryan Adams singing “(Everything I Do) I Do It For You” from the Robin Hood Prince of Thieves soundtrack.

It’s not the original version, though. It’s the Spanish version. Somehow “(Todo Yo Hago) Yo Hago Por Ti” works in Spanish at least as well as the original does.

After Señor Adams, the soundtrack slides into a salsa mix for the rest of the ride, apart from one slight deviation back to “Vientos de Cambio/Winds of Change” by Los Scorpions.

The ride passes without event, aside from the driver passing another bus on a blind curve, and the turkey on the lap next to our traveler mistaking one of his arm hairs for something edible. The turkey’s owner mumbles something and transfers the bird to his other leg.

Disembarking into yet another dusty patch, the traveler confronts half-dozen teenagers selling sunglasses, cashews, chiclets, and newspapers. Pushing through them, he hustles to the back to be there when the ayudante tosses his backpack off the roof.

Ignoring the waves and coquettish smiles from the brothel across the street, he opens a brand-new box of chiclets and awaits the next leg of his journey into the Guatemalan highlands on yet another Bluebird school bus, reborn into a chicken bus.