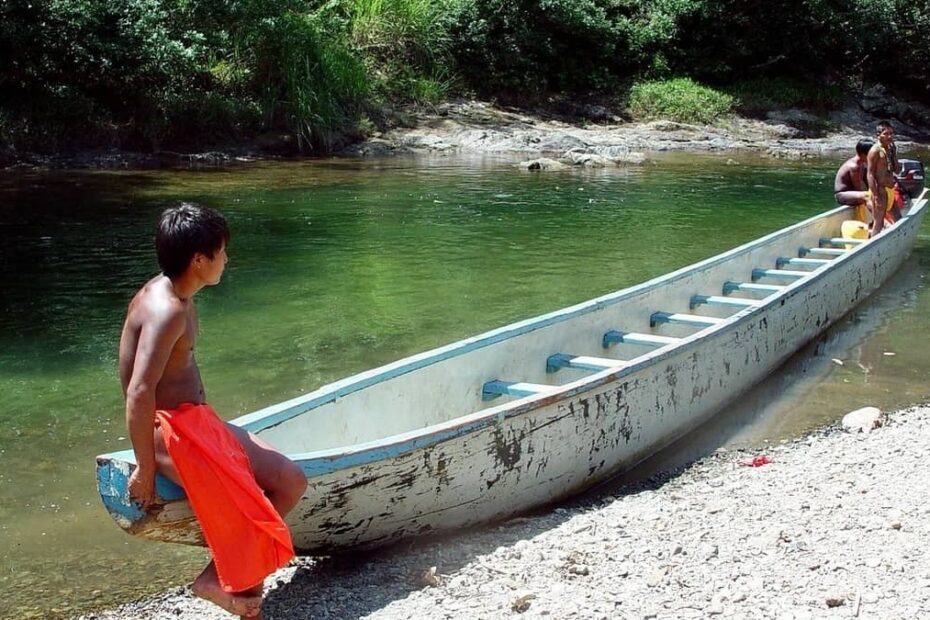 A Quick Guide to the Indigenous People of Panama

Writer Liz Szalai takes a look at who the indigenous people of Panama are, where they live, and some interesting facts about them.

I remember my first exposure to the indigenous people of Panama. On my second day in Panama City, I was traveling on the metro, and along came an tiny elderly lady with bracelets, anklets, nose ring, and beautifully-ornamented clothes. I remember seeing her texting on her smartphone, mixing the old and the new, which struck me.

Later, I found out she was from the Guna people. That got me interested in knowing more about the people who lived here before the Spanish invasion.

Panama, I learned, has seven indigenous groups; the Ngäbe, the Buglé, the Guna, the Emberá, the Wounaan, the Bri Bri, and the Naso. Together these groups make up around 13% of the population.

Let’s take a look at this 13% of the Panamanian population, at where they live and who they are.

Location: North-west Panama (Chiriquí, Bocas del Toro, Veraguas). They have their comarca together with the Buglé people. A comarca is an administrative area ran by indigenous groups where they can practice way of life with little or no interference from the government. Indigenous groups in Panama have full land rights on their comarca.

Lifestyle: The people living in the comarca survive on subsistence farming, producing corn, rice, and root vegetables. Some make woven bags or other artisanal items to sell. The men often migrate to Boquete to work in the coffee fields during the harvesting season. Many young people leave the comarca to seek a better life in Panama City or elsewhere.

Lifestyle: Like the Ngäbe, the Buglé people live from farming and making artisanal products. The Buglé is one of the poorest indigenous groups in Panama, and the illiteracy rate in their comarca is around 30%.

Interesting fact: They say the Buglé fought the Spanish fiercely when they tried to force them from their fertile land. This is why their numbers are so small today.

The Guna people (although they refer to themselves as Tule):

Lifestyle: The Gunas are the most recognizable indigenous group in Panama. The women usually wear beautiful, ornamental clothing decorated with molas (their textile art). They make various products decorated with molas, and you’ll see this for sale all over Panama. The Caribbean Gunas live from fishing, from selling their artisanal products, and from tourism. The mountain Gunas are less open to visitors and live from farming.

Interesting fact: The Guna people live in a strong matriarchal society. Women make the important decisions, and they very much enjoy their elevated status.

Interesting fact #2: They also have a third gender, called Omeggid (‘like a woman’) when a women’s spirit was born into a male body. The Omeggid is not restricted… they grow up embracing themselves as they are. They learn to make molas from their mothers, and live their life as their heart dictates.

The last interesting fact (there’s so many) about this group is that they have the highest rate of albinism in the world. The Gunas call people with albinism “children of the moon“.

Location: Darién Province, around the Rio Chagres (Emberá-Wounaan comarcas), and Chocó in Colombia.

Lifestyle: Hunting, fishing, gathering. Some older people still wear traditional clothing (loincloths and skirts made of palm leaves), but the influence of the church made these traditional clothes more modest, with significant skin coverage nowadays. They also use temporary tattoos made with jagua fruit extract for special occasions (and for tourists).

Interesting fact: the Emberá language is not one language, rather a group of mutually-intelligible languages.

Sadly, this indigenous group still practices female genital mutilation, although efforts have been made to end this practice.

Lifestyle: A rainforest people, the Wounaan carve tree-trunk canoes to move around rivers and mangroves. Some still use frog poison darts and traps to hunt, but this way of living is disappearing as their environment shrinks. They still use traditional body paints, and have sacred ceremonies, dances and rituals.

The Wounaan are also farmers, planting and harvesting root vegetables, fruit, and corn.

Interesting fact: The Wounaan are famous in Panama for their woven baskets (called hosig di) weaved from the fronds of the chunga palm. They dye these baskets with natural colors, and the weave is so tight, they hold water.

Location: Caribbean side of the Panama-Costa Rica border, by the Rio Teribe.

Lifestyle: Many Naso people still live in simple houses of palm stilts and leaves. They make a living from farming (cacao, fruits and small livestock) or selling artisanal products like baskets or wooden carved plat.

Interesting fact: The Naso are one of the last indigenous monarchies in Latin-America, with their king residing in Sievic. Their monarchy is quite democratic – if the people don’t like their king or queen, they can vote for them to resign. A monarch does have to come from the ruling family, though. The current king is Reynaldo Santana, on the throne since 2011.

Location: Bocas del Toro (and across the border in Costa Rica)

Interesting fact: The Bribri live in matriarchal communities. Only women can inherit land and prepare the cacao for their sacred cacao ceremonies. They believe that Sibö, their main God, turned a woman into a cacao tree, and they never use this tree for firewood.

I hope you enjoyed this brief introduction to the indigenous people of Panama.

As mentioned above, a lot of indigenous people live in extreme poverty and illiteracy is still very high. The government and various charities work in indigenous communities on all manner of projects, from sex education to schooling, environmental projects, life improvement, and more.

These communities are not only out in the comarcas – they’re also in Panama City, where indigenous people suffer from high numbers of unemployment and face various social issues.

If you can, why not volunteer your time and work with indigenous communities in Panama? Or failing that, treat yourself a beautiful artisanal product made by them.