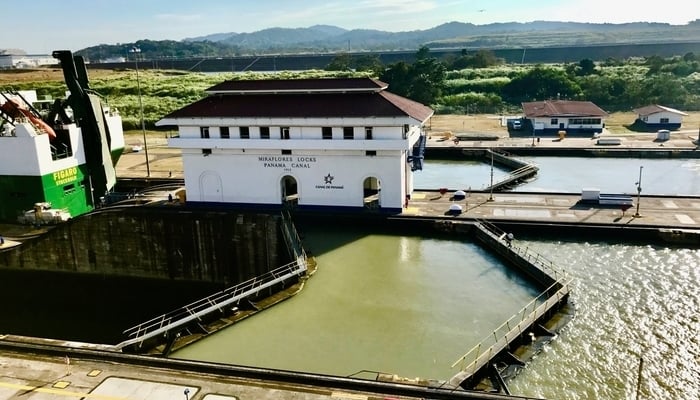 A Family Day Trip To The Miraflores Locks, Panama

If you’re in Panama, a visit to the Canal is a must. Here, expat writer Lee Elliott describes a family day out to the Miraflores Locks to see the big ships.

The Panama Canal mesmerized me! I had been staring at these little engines (called mulas – mules) glinting in the sun as they crawled along their fixed rails at the Miraflores Locks for at least an hour. 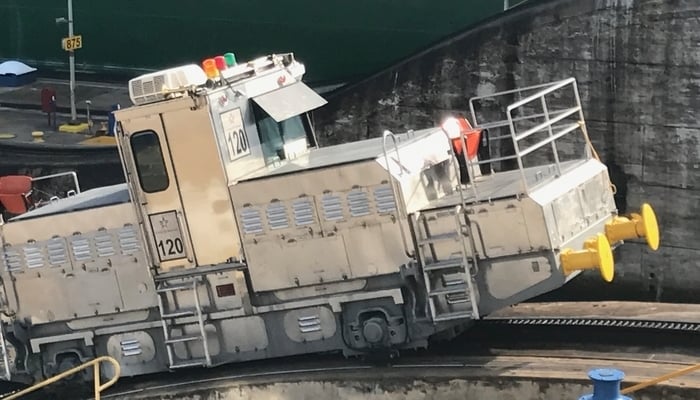 The ship they were pulling into the lock below me was flying a Swedish flag as it lumbered along, a huge beast of a vessel stacked high with containers.

Beyond the entrance to the canal, more ships lined up into the distance waiting their turn.

The process of loading a ship into the lock, winding the iron gates shut, and floating it to meet the level of the canal beyond is slow. And I mean super slow! But somehow you can’t help becoming transfixed.

I imagined some Swedish containers it carried must be on the way to the Ikea store in Seattle where I furnished my old apartment a few years before.

The fastest route from Scandinavia to the west coast being via this multi-tiered wonder of a waterway that is the Panama Canal.

Beyond the lock those who had entered before at a sea slug’s pace gathered speed as they disappeared inland, leaving the Pacific for the Caribbean. 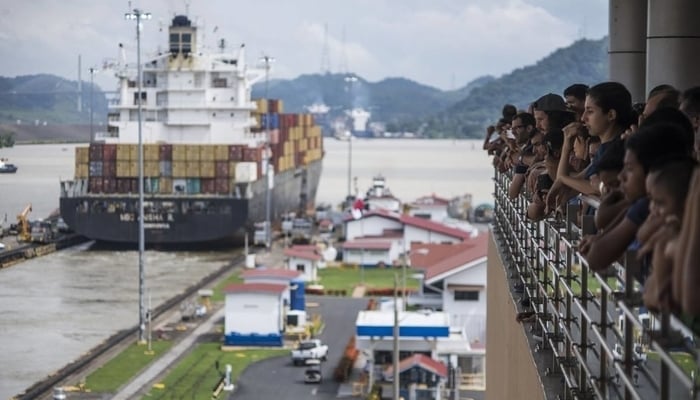 Soon after moving to Panama, I felt obliged to see the Panama Canal first hand. It was not a day trip I was particularly looking forward to though, if I’m honest.

I imagined the Miraflores Visitor Center overlooking the entrance to be full of whatever they call the ship version of trainspotters. ‘Ship-spotters’ minus anoraks and in less of a hurry?

But then I found myself calmed and spellbound watching something I thought would be boring. In fact, it was therapeutic!

An hour passed before I knew it while gazing at this lumbering performance.

The last time I felt like this was when as a child I watched a lava lamp turned on for the first time, waiting for the wax to melt and do its thing.

Unless you’re paying for a tour and arrive on a bus (unnecessary in my opinion), the best way to get to the Miraflores Locks is by car, taxi, or Uber.

We arrived a little after 3:00 pm and were lucky as I heard other than at 10:00 am, this was the best time to be sure of seeing ships passing through. With no ships, this could have been a disappointing visit, apart from the ice-cream kiosk, which alone made the journey worth it for the kids. 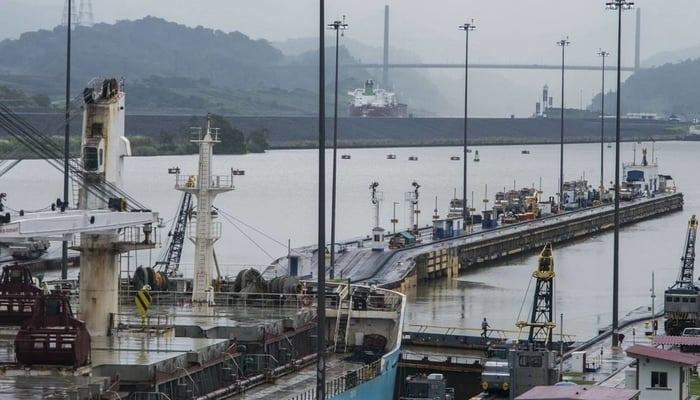 Once you’ve had your fill of the observation deck, or while you are waiting for some slo-mo action on the canal, you can visit visitor center museum.

Made up of four exhibition halls, this covers the history, function, international importance, and the inevitable biodiversity of a man-made waterway linking the Caribbean to the Pacific.

While inside, time your wanderings to ensure you catch the 3D movie they play. This is informative while remaining engaging for the kids. There are alternate English and Spanish sessions, so if you’re not bilingual, check the times. 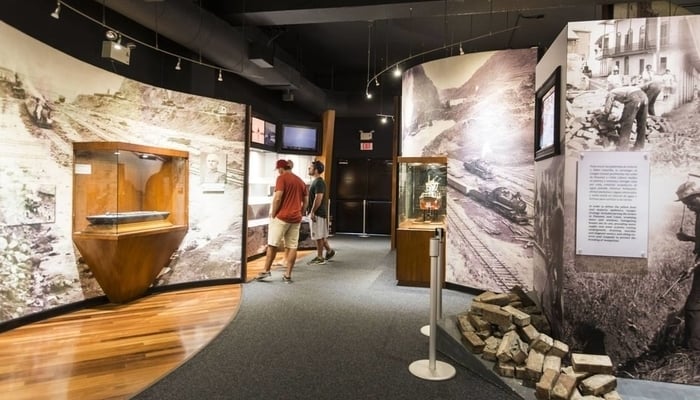 After so long on the observation deck I was happy enough with the comfy seats and air-conditioning.

Once you’ve had your fill of ships, the inevitable gift shop has the usual selection of mugs, postcards, and trinkets. If you’re hungry like we were, there are snack bars, or on the top floor of the center is the Atlantic & Pacific Co. Restaurant for something more substantial.

While the visitor center closes at 6 pm, the restaurant is open until 10:30 pm and also has a view over the canal and locks.

Serving Neo-Panamanian fare and some decent fish dishes, the food is good but can be expensive with the buffet coming to $50 per person after tax and tips. 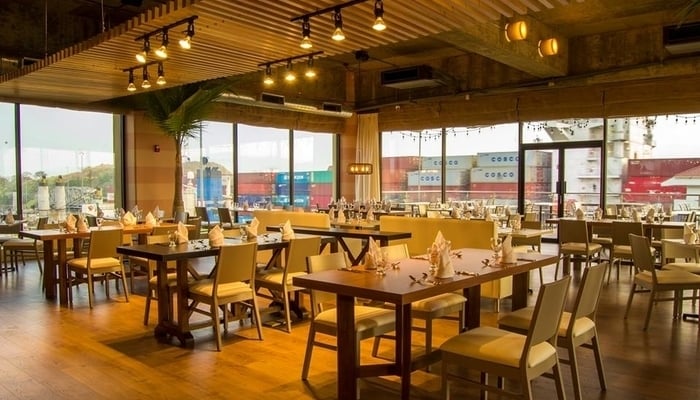 Like most parks and museums, there is that annoying price tier difference between locals and visitors.

Non-residents pay $15 for adults and $10 for children aged 6-12, compared to a fifth of the price for residents.

But if you only want to see the lock and don’t care about the museum and the movie, you can bypass the museum entrance fee and go straight to the restaurant. A smart move if you have a long wait to see a ship come in.

It was a worthwhile visit. As a family, we enjoyed the experience, and the children had fun. If I was to visit alone or as a couple, next time I would aim to arrive later and book a patio table.

The menu after 4 pm is a la carte and more varied rather than the expensive ‘buffet only’ option during the day.

I recommend Chef Julio’s pork belly and Tamala followed by a secco and tonic at sunset overlooking the shipping beasts of the Miraflores Locks. 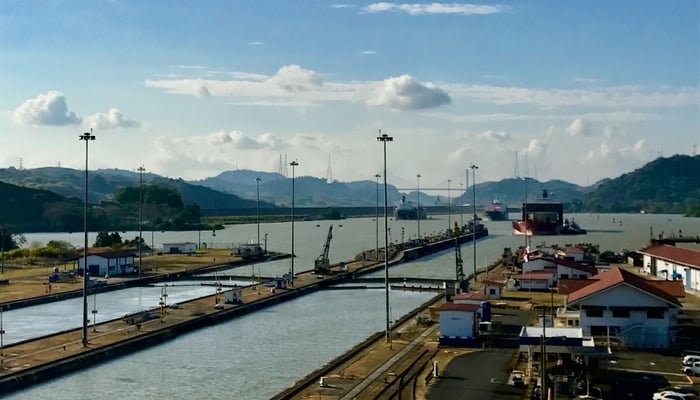