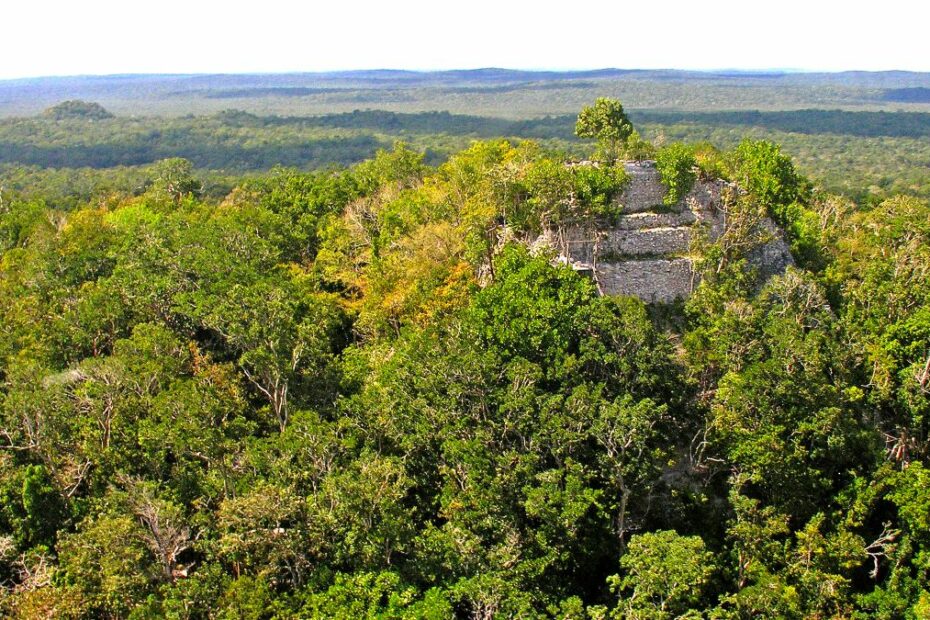 Deep in the jungles of Petén in northern Guatemala, an anomaly rises high above the rainforest canopy. For roughly 50 km in every direction, there is nothing but the impenetrable density of the Mayan Biosphere Reserve, an uninterrupted expanse of greenery stretching as far as the eye can see.

Uninterrupted that is, except for a tree-covered hill, standing alone and disrupting the otherwise uniform skyline. But what you’re seeing here is no hill. It’s actually the tree-submerged ruin of the greatest ancient Mayan pyramid in Central America.

La Danta is the largest structure in the ancient city of El Mirador, towering 72 meters above the rainforest floor. It’s the fifth tallest pyramid in the world, and second in volume only to the Great Pyramid of Cholula in Mexico. Built of limestone, the stones range from roughly the size of a cinder block up to that of a modern refrigerator.

After hiking for two days through mosquito-infested jungle, shin-deep squelching mud, standing on top of the La Danta pyramid feels like heaven.

As I looked out over the treetops, a question kept resonating through my mind. “How the hell did they build this?”

Hiking through the Mayan Biosphere Reserve

Before we get lost down that rabbit hole, some context might be useful to frame quite how out of place El Mirador seems, when visited roughly 2,300 years after the pinnacle of its power.

Guatemala’s Mayan Biosphere Reserve covers over 21,000 square kilometers, a fifth of the country’s total land area. It protects the largest area of rainforest in Central America. We would be spending the next five days inside this wilderness, looking for the remains of a once magnificent empire.

We’d left the island town of Flores at 5:00 AM the day before. After a rough drive, we arrived in the remote village of Carmelita at around 9:00 AM.

Carmelita is edge-of-the-world place at the end of the road, and it would all be on foot from now on.

After breakfast, we set off into the jungle along a mule trail, with Antonio, our guide from Cooperativa Carmelita taking the lead. Almost immediately, we were beset on all sides by the denizens of the jungle.

Mosquitoes dive bombed us in frenzied squadrons and we slowed to a crawl as we negotiated deep puddles and thickets of thorns.

Antonio’s efficiency and skill with his trusty machete soon won the day, and we burst out of the bush into a tranquil sun drenched clearing. Already exhausted, we gathered in the shade of a rickety wooden hut and devoured our sandwiches.

After a further few hours, we finally made it to camp at another Mayan site – El Tintal, complete with its own incredible ruins.

We scrambled 44 meters up the larger of two pyramids, identified by Antonio as Eneken / Henequen, in time for the sunset. Right before we lost the light, we could make out a distant but distinct outline to the north. Antonio verified this was La Danta, visible about 20 km away through the rainforest.

After a restless night trying to snatch a few hours sleep while howler monkeys bellowed and the entire jungle seemed to scream, we rose at dawn. After a simple meal of scrambled eggs, beans and tortillas, it was time to hike.

This time, the going was easier. The slurping mud was now a well-trodden pathway on a wide, causeway-like platform raised about three meters above the forest floor that stretched 10 to 15 meters either side.

Antonio told us we were walking on La Calzada Maya (the Mayan Road), a causeway created out of stucco. We could see the crumbling stone parapets and retaining walls bordering it.

This particular causeway connected El Tintal and El Mirador, carving a 20 km straight path through the jungle. Archaeologists believe that further causeways exist in these forests, reaching up to 25 km in length and 40 meters in width. They functioned as trade and transportation routes between Mayan settlements.

As we hiked along this archaic highway, I pictured how it must have looked in its prime. Cleared of foliage, with the sun beaming down onto gleaming white limestone, this once bustling road would have been an artery of commerce.

At long last, our legs aching and any exposed skin peppered with insect bites, we finally arrived at El Mirador.

As we entered camp and dropped our bags, Antonio suggested we repeat the previous day’s exercise, and climb the El Tigre pyramid (the second largest in the city) before sunset. Rousing ourselves, we made our way to the base, and began to climb.

Archaeologists have been working at El Mirador since 2003, and the rough wooden steps embedded in the soil covering the stone beneath survive in good condition. As we cleared the canopy and climbed the pyramid, the full scale of El Mirador was finally revealed to us.

The city boasts several thousand structures encompassing over ten square miles. As we caught our breaths and turned to take in the stunning view, we could finally see El Mirador’s most famous monument. Positioned opposite the face of El Tigre, the colossal monolith of La Danta loomed over the entire site.

Carpeted in vegetation, the single tree crowned the peak of the pyramid, the highest living thing for miles.

The next day, Antonio took us on a tour around the site, showing us intricate stucco carvings and explaining the structure of Mayan society. One of the most interesting features to me was that the Pre-Classic (roughly 1000-800 BC until 250 AD) buildings used the larger blocks, and later constructions used only the smaller blocks which remained in the quarries. They built everything without metal tools, and without working animals to move the huge quantities of stone.

We explored in a dreamlike state, with moss covered stonework erupting from the forest around us with no rhyme or reason, the meticulous planning of the city obscured by the jungle.

In the afternoon, we headed along the 3km causeway, La Calzada Danta, from the city ruins to the main acropolis. To try and encapsulate the true size of this astonishing complex would be impossible. Suffice to say, though, we could scarcely believe the immense mountain was man made, and built out of stone moved by bare hands.

We approached the first set of steps, which seemed made for giants rather than people, and again began to climb.

La Danta sits on an enormous raised-earth plateau, over 300 meters long and 200 meters wide. The main temple complex sits on the plateau. Here, another pyramid – La Pava – stands on the right hand side, facing perpendicular to the first set of steps. Then, two smaller structures, a water reservoir which would have supplied the entire complex, and finally, on a further platform, La Danta itself.

Howler monkeys as our band of explorers stood at the base of the pyramid. We craned our necks as the semi-rotted wooden staircase ascended high into the trees, and began climbing. By the time we reached the final platform before the summit, we’d lost all sense of proportion about how high above the true forest floor we were.

The ‘triadic’ structure of three crowning mini-pyramids on the final platform gave way to a carpet of green, contrasting against piercing blue sky. Completely out of breath, we took the final wooden staircase to the very top, and the most breathtaking view ever rewarded us.

If you’ve ever been on a boat with nothing but sea between you and the horizon in all directions, you might have an idea of the vastness of the forest here. How it must have felt to stand there 2,000 years ago we will never know, but the feeling of discovery and sense of history will never leave me.

We hiked back to Carmelita along the same route. It was as grueling as the way there, except this time we walked in rather a stunned daze as we contemplated the wonders we’d seen. While many travelers who come to this part of the world rightly visit the more famous (and accessible) Mayan site of Tikal, I absolutely have to recommend the trek out El Mirador, Guatemala for anyone physically able to make it and with a true sense of adventure.

Bertie Ford is an ex-lawyer, aspiring journalist, and avid traveller from the UK. He has spent time backpacking in South-East Asia, India, Australia and Central America.