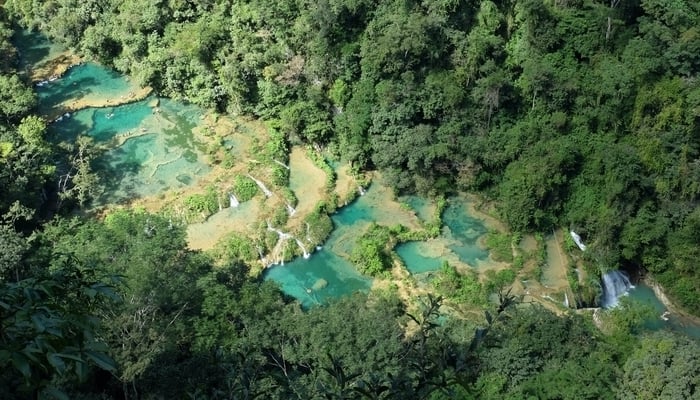 Semuc Champey, Guatemala will reopen on November 10 according to tourism authorities. This article contains some affiliate (referral) links, where we make a small commission if you buy anything after clicking, at no extra cost to you.
/em>

The National Council of Protected Areas (CONAP) announced today that Semuc Champey in Guatemala will reopen in November.

In a press release, CONAP said Semuc Champey would reopen on November 10. The opening hours will be 8:00 AM-4:00 PM, Tuesday-Sunday.

The move comes after authorities reached consensus with local communities over health protocols.

Semuc Champey will open at a limited capacity of 60 people per day. Visitors will need to book their trip in advance by phone. Once at the site, they’ll need to follow mask-wearing and social distancing rules.

Semuc Champey is one of Guatemala’s most beautiful landmarks.

Located in the jungles of eastern Guatemala, Semuc Champey marks a section of the Cahabon River. Here, you’ll find a natural limestone bridge where the river turns into a series of turquoise pools. Each pool links to the other via a waterfall.

The area offer great caving, where you can swim by candlelight, and some awesome tubing. There’s also a lookout point, about a 45-minute hike away, to view Semuc Champey.

Semuc Champey is remote, compared to other attractions in Guatemala. But those who make it there almost always call it a highlight of their trip. It’s always been more on the backpacker trail in Guatemala than places like Tikal or Lale Atitlan, probably due to the remoteness. But this is a part of Guatemala that noone – local, expat, or tourist – should miss.