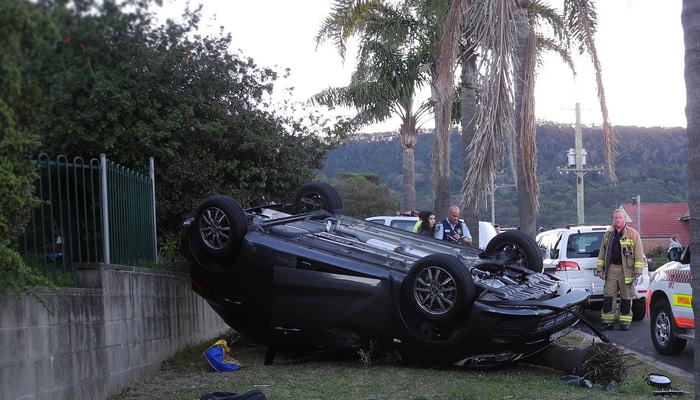 Driving In Nicaragua – My First Accident

After almost three years of living and driving in Nicaragua, I finally got in a car accident.

My parents are in town, so I seized the opportunity of using their rental car for a trip to PriceSmart in Managua. I even invited a friend to come along on the air-conditioned ride.

We enjoyed a successful and easy trip, ate Chinese food at a new place I wanted to check out and were on our way back in record time. We were about halfway back to San Juan del Sur spinning through one of the many unnerving rotundas when something bumped us.

“SHIT!” is what flew through my mind and most likely out of my mouth.

Let’s be honest, driving in Nicaragua is not for the weak and at any moment I could break traffic rule I didn’t realize existed.

When the taxi driver and his passenger got out their car and yelled at me, I thought “Yep, must have been my fault.”

The driver accused me of trying to run. See, in Nicaragua, when you get in an accident, you should stop your car right away so the police can determine fault. Being North American, my initial reaction was to pull over ahead to exchange information. I remembered the Nicaraguan rule, but about 30 meters away from where the accident happened.

I looked at my parents’ rental car and noted light damage along the side and my flat tire.

With both our cars in the way of traffic at separate locations, I walked over to his car as he pointed to something on the ground. It was a sharp lug nut decoration, which must have caused my flat. I bent down to pick it up off the road and he shouted to “Wait for the police.”

Right, it would be part of the investigation.

He and his passenger asked for money.

I guess they checked out the white girl and saw dollar signs. At first, they asked me to pay them $70 or they would call the police. I told them to go ahead, and the passenger made, what later I found out, to be a fake call.

We waited and waited while a small crowd gathered.

A few onlookers negotiated new terms and a lower payout for me. To my surprise – and not what I’ve heard happens in most cases – many of the Nicaraguan bystanders seemed to be on my side. They still felt, though, that paying the offender was my best option.

As the clock ticked, I ran over the incident in my head.

I watched as cars went around his tattered, blue taxi and drove in the same lane and in the same direction as I had been going.

It was clear I broke no traffic rules. He, being Nicaraguan, had stopped right at the site of impact.  Unfortunately for him, this left his car right on the line while still in the rotunda. Even I knew this was a traffic violation.

As we waited, I wondered if the police would ever come. I asked the passenger if she had called earlier, and she said no.

More time passed and still, no money left my wallet. I got nervous that the cops – when they showed up – would find me at fault.

When you get a ticket in Nicaragua, the police take your license. This is a real pain and the reason people pay bribes to cops. The deal is you pay your ticket at the bank and take the receipt to the police station to get your license back. I’ve seen the mob of people jockeying for position at the counter trying to do this and I had no desire to be part of that. Worse, if you don’t pay within three days, they send your license to Managua, where I can imagine a larger, more aggressive, mob accumulates.

I felt nervous as I watched them plead their case.

The police treated the accident site like a CSI crime scene. While one did a horrible job of directing traffic, the other drew diagrams, inspected vehicles, and measured the distance between our cars (Oops!).

Police investigating at the scene / Driving in Nicaragua / Jenna Reid

Afterwards, they told us to move our cars off the road, and I asked if I could change my tire, which he agreed.

One thing I love about Nicaragua is that when you’re a damsel in distress, there is no shortage of kind people who will help you out. As we unpacked our trunk full of embarrassing Gringo riches to get the spare tire, an onlooker offered to help.

While my new friend struggled with what appeared to be a brand new jack, I watched the police officer hand the taxi driver a ticket and the driver return the ticket folded in half with money inside.

It’s normal to pay off police in Nicaragua, and that’s what he did. Maybe this would go my way after all.

I offered some olive oil to my savior from the jug I just purchased to help grease the jack. This worked, and we paid him 200 cordobas (about $6.50) for his kind gesture.

After half an hour, policeman Señor Grissom allowed me to speak to him. My leading statement was “No es mi culpa.” (It’s not my fault). Yeah, I know, I should have said that in past tense, but my Spanish is a work in progress.

He asked which entrance to the rotunda I came from and where the taxi came from. Then he asked me to sign his artwork, handed me back my license and insurance and told me I could go.

The three of us bolted to the car and drove away, seat belts still clicking on.

Hindsight does not appear to be 20/20 in this case.

As I replay the events in my head, nothing makes sense. Why call the cops if you were in the wrong? Why waste two hours of your afternoon for a small scratch on an already beat up car? Why do the police do such extensive investigative work only to take a payoff and send me on my way?

I can’t tell you the best way to handle an accident in Nicaragua. I’m not even sure I handled it well. All I can say is that I trusted my judgment, remained calm, and smiled through it.

If there’s one thing I’ve learned while living in Nicaragua, it is that life throws you curve balls all the time.

You can’t control the pitch but you can control your reaction and still make that home run.

Jenna Reid moved to San Juan del Sur, Nicaragua with her husband and two kids in 2015. She helps her husband operate a website development company and she enjoys freelance writing. Her personal blog is The 1 Less Traveled By.