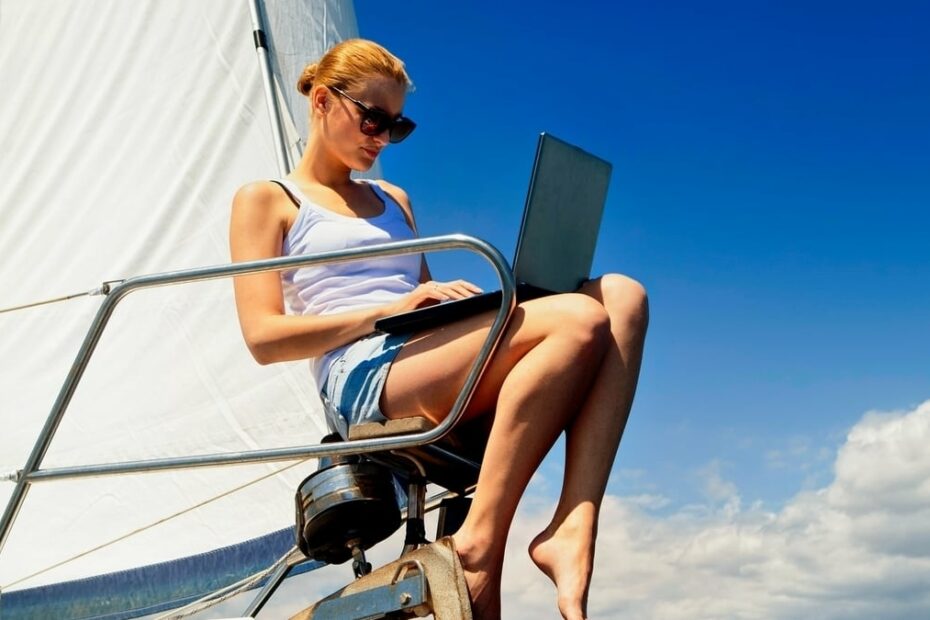 A look at how we covered remote working in Central America in 2021, from visas to job ideas to practical tips and more.

Since the pandemic began almost two years ago, thousands upon thousands of people found themselves out of their offices and working at home, following in the footsteps of many more, who took the plunge into remote work pre-pandemic.

What was a matter of necessity in March 2020, has now become a matter of choice for workers from all over the world. Gone are the days of clocking into the 9-5, commuting, and lunch hours in staff canteens. The pandemic has brought about a revolution in the workplace, and the genie is out of the bottle.

It was always coming, the remote work thing, especially in the part of the world we cover.

Travelers have been arriving in Central America for years, logging in, and earning online. It’s nothing new.

But the pandemic made it mainstream. There’s a new, growing, remote working class trying to get out of the northern rat race and move to sunnier, healthier, climes. Central America is in an optimal position to receive them.

In 2021, we’ve been following the whole remote worker thing as it unfolds.

We’ve seen countries in the region sign remote worker bills and improve their internet speeds. And we’ve tried to offer tips and advice on how to make the big move out of the office and into a more tropical workplace. A workplace where you can wear flip flops instead of brogues at your meetings.

So let’s recap how we covered remote work in Central America and all that goes with it in 2021.

So you’re a digital nomad and you’re thinking of moving to tropical Central America. But which country is going to work best for you?https://t.co/Ix6zs6EknM#CentralAmerica #digitalnomad

Remote work visas: What happened in Central America in 2021?

Since the start of the pandemic, countries all over the world have been doing their best to attract remote workers. People who feel they could just as easily work from abroad as from their sofa or local Starbucks.

Here, in Central America, we saw Panama and Costa Rica sign remote worker visas into law; Panama in May, Costa Rica in August.

The requirements and requisites for each remote visa are very similar. Both Panama and Costa Rica require remote workers to have a minimum monthly income of $3,000. In July, we compared the two remote work visas.

There’s a hitch, though. Costa Rica still hasn’t cleared it’s remote worker visa. It’s signed into law, yes, but Costa Rica’s immigration department still has to finalize a few points. They need to figure out exactly how much to charge for this visa, and some details over the required health insurance.

They should have cleared this up by the end of October, but as things stand, it’s still not ready. Pura vida.

Panama has passed a law to allow remote workers to stay in that country, and Costa Rica is hot on its heels with approved legislation of its own. We compare the two visas as they stand right now. #digitalnomad #remotework https://t.co/hfhGtsXaX0

But whether a country has a remote worker visa or not, it doesn’t matter.

It doesn’t and won’t stop people coming down for an extended trip and earning their money online. And it shouldn’t stop you either, even if you have no idea what you could do online.

After all, there are plenty of options. You can first ask your present job if it’s possible to do online. If it is, you could be could to go, especially of you’ve been working from home since the pandemic. What difference does it make where you are?

But if your boss has dragged you back into the office grind, then it’s time to look at other options, either for a full time job or a bit of a side hustle.

We’ve been talking a lot this year about what type of work digital nomads or remote workers do. After all, “working online” can be a mystery to many. In July and August, we offered some startup advice to would-be entrepreneurs coming to Central America, plus some tips on blogging for your business. We’ve also spoken about cybersecurity in this part of the world and how to look after yours.

As well as some of the more practical advice like that, we’ve also been looking at actual work real people do down here.

One of the first articles we ever published on this site was about what expats did in Costa Rica – we were singing the remote work song back in 2017. In October, we dug deeper with a few suggestions on how to make money online in this part of the world.

We talked about the virtues of becoming an online travel consultant, a trader, or a freelance… whatever you want to be. We’ll carry on highlighting remote work ideas throughout 2022 to give people ideas on ways to change their lives and move to Central America while earning online.

For example, off the top of our heads, we can think of some more ways to earn a living right now – Social media management, for example. How would you feel running the Facebook, Twitter, Instagram, LinkedIn, and Pinterest accounts for various businesses?

That’s often a full time job on its own for many smaller companies, so they like to farm it out to an expert like you. And if you’re not an expert, there are courses out there to become one (we’ve also talked about how creating courses is an excellent way to earn money).

Beyond the luxury of working in different places, remote workers need to understand their responsibility in paying their taxes. While some may think this is a burden to take, there are actually more benefits to you as a remote worker paying taxes. In Australia, many take advantage of work from home tax deduction that covers electricity, water, rent, and mortgage interest for employees. In fact, even a renovation deemed necessary for your home office can be charged as deductible. Hence, finding out what you can claim from your taxes can be more beneficial to you.

Or how about getting into the online gaming and casino world?

Live casino is a new concept of online gaming that seeks to recreate the action one experiences in a real life, traditional casino. This means that instead of regular online gambling, you’ll find live dealer tables instead, manned in real time by real life dealers.

As a remote worker, you can find work with live casino company, as a dealer, a presenter, a host, a moderator, or anything else where customers need direct contact with human beings instead of a computer.

The live casino concept is taking off in a big way, and it offers great possible employment options for anyone who’s down for that kind of thing.

What’s more, Central America – especially Costa Rica – has a strong background in online gaming, with many companies actually in the country already.

The point is to think outside the box a little. There are so many ways to make a living online if you’re unable to keep your regular job. And we’ll continue talking about them in 2022.

What is the Difference Between Online and Live Casinos? https://t.co/GSCxDnYPBE #Gambling #Casino #OnlineCasino #LiveCasino via @kensdigest

Another facet of the whole digital nomad in Central America thing we’ve covered this year is El Salvador.

While El Salvador hasn’t signed any remote worker visa bills into law, it has, in its own way, begun to attract the digital nomad set through its embrace of Bitcoin.

In September, El Salvador became the first country in the world to make the cryptocurrency legal tender, alongside the U.S. dollar.

Now, whether you like the idea or not (and we’ve been critical about it being more about publicity and covering up the president’s growing authoritarianism than about the good of the Salvadoran people), this has attracted digital nomads and entrepreneurs to El Salvador.

President Bukele has offered easy access to residency and even citizenship for people prepared to put more Bitcoin into the economy, and we can expect to see El Salvador continue to attract foreigners in 2022. Will it work? We don’t know, but we’ll continue watching.

A pragmatic look at Bitcoin as “legal tender” in El Salvador. Will it actually WORK for Salvadorans (as opposed to foreign expats and wannabe expats) or is it just a publicity stunt?https://t.co/dHMoGXi0CO

2021 was an interesting year for remote workers and digital nomads in Central America. We look forward to covering more in 2022.

This should be the year that Costa Rica finally puts its remote worker bill into action. And we also hope to see other countries follow suit, behind Costa Rica and Panama. Belize might well be on the cards – it hosted a conference this year to attract investment, and some form of remote worker-attracting incentive might follow.

Whatever happens, we’ll continue reporting and promoting the movement throughout the year, from the politics and the logistics, to co-working spaces and more.

James Dyde is the editor of centralamerica.com. He lives in Escazu, Costa Rica