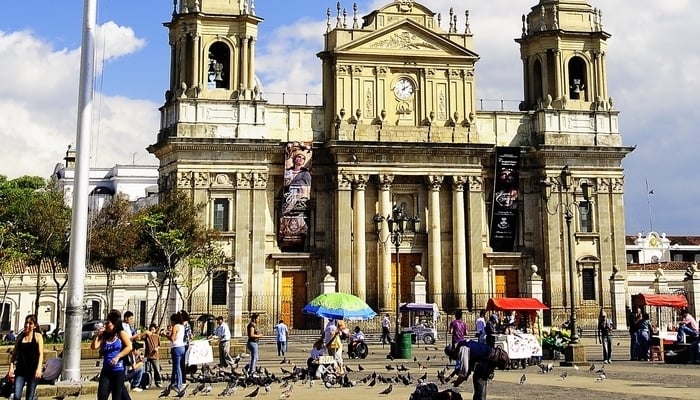 Guatemala will end its lockdown tomorrow, October 1, as the current state of emergency is set to expire. Authorities announced they would not be asking lawmakers to renew the Estado de Calamidad.

In true Guatemala-style, a public spat between President Alejandro Giammattei and his VP Guillermo Castillo has overshadowed this announcement.

Long story short, Giammattai accused Castillo of leaking the contents of a discussion via text message.

In the messages, Castillo refused to attend a meeting and expressed disappointment that Giammattei wouldn’t delegate control while he had COVID-19.

He accused the president of not thinking of the Guatemalan people and told him to start acting like a statesman.

Responding on a radio show yesterday, Giammettai threatened legal action for leaking the messages and publicly wondered what Castillo does on a day to day basis.

This sideline divide between Guatemala’s president and vice-president is symbolic of the nation as a whole.

On the one hand, many in Guatemala welcome the end of lockdown and are ready to move on.

Plans are underway to reactivate Guatemala’s domestic tourism, with the relaxation of entry guidelines already announced. Retailers are now shifting into overdrive to gear up for the upcoming holiday season.

But Guatemalans are also voicing their concern about a second wave of COVID-19. They cite lower number only indicate a lack of testing throughout the country.

COVID czar, Dr. Edwin Asturias says testing levels need ramping up to at least 5,000 per day to maintain a safe reopen. Guatemala doesn’t even come close to that, with around 3,000 tests carried out per day. On weekends, tests barely reach over 500.

#Guatemala eases entry protocols enter the country. They now accept a negative antigen test (instead of just the PCR test) and have eased measures for “frequent travelers” at land borders. Costa Rica and others – are you watching?https://t.co/RlJNtlf1w3

Social distancing measures will also ease up a little. For example, in red alert areas, gatherings of up to ten people will now be allowed.

Sporting events and religious gatherings are back on, albeit under social distancing recommendations. Only schools will remain closed for the time being.

It’s interesting to note guidelines once mandated under threat of fines or imprisonment are now simple “recommendations”.

An intense awareness campaign is underway asking citizens to wear facemasks, social distance, and wash their hands. But the threat of criminal action for not doing these things is now gone.

Guatemala now stands at over 90,000 confirmed cases of COVID-19.

This is a stark contrast from some of the direst predictions that called for 150,000 cases by the end of July. Some projections called for over a million cases by March 2021.

Critics will say these numbers are low because of lack of testing. But even so, by the looks of it, case numbers won’t get anywhere near to the worst predictions.

Does that mean the pundits got it wrong?

President Giammattei has acknowledged Guatemalan’s disposition to observe the guidelines. He credits this as the main factor for the decrease in case numbers and deaths.

Either way, Guatemala looks in much better shape than in July, when they rolled back many of the most restrictive measures.

Back then, health authorities warned of hospitals flooded with COVID patients. That never happened. While the July easing caused a slight spike, hospital never got overwhelmed. Occupation still remains within manageable numbers.

It seems Guatemala is ready to turn the page on the COVID pandemic and focus on the road to economic recovery. The tourism sector says recovery to 2019 levels will take anywhere from two to four years. It’ll take about three years to get back to pre-COVID employment levels. The 2020 school years is “lost”.

There’s a lot of work to do, but the rift at the top of government now casts a shadow over the next phase in a post-COVID Guatemala.

One thing is certain, though. The resilience of the Guatemalan people has shone through yet again. In a country wrought by natural disasters, war, and poverty, Guatemalans have found a way to emerge from the ashes.

Will Guatemala emerge as a post-COVID phoenix?

You can count on that.

As Aeromexico arrives back in San Jose, Costa Rica welcomes...

Looking for ways to restart El Salvador tourism, the government...