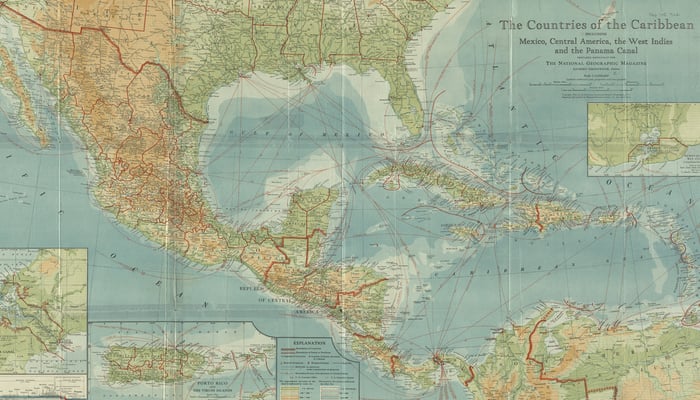 At the beginning of 2018 we published our first article of the year called “What’s Going To Happen In Central America In 2018?” So… what happened here during centralamerica.com’s first year? Here’s our Central America review of the year.

Wow, that was some year right? I guess if I had one word to describe 2018, it would be chaotic. Or messy. That’s two words, so take your pick, either is fine.  And I’m not talking about the Trump or Brexit debacles or the Saudis chopping up journalists in embassies or Germany and Argentina crashing out of the World Cup.

I’m not even talking about Vladimir Putin or Stormy Daniels or Roseanne Barr or Philly beating the Patriots in the Super Bowl. Or even Brett Kavanaugh.

I’m talking about events right here in Central America, on our little isthmus.

In the almost 19 years I’ve been in Central America, I don’t think I’ve seen another year like it around here. I mean, sure, it’s nowhere near like it was back in the 80s, when you could kind of sum up events in Central America by watching American Made, Tom Cruise’s best movie since Top Gun.

For many who weren’t around or were too young in the 80s, American Made might provide perspective in a pop culture kinda way.

But back to the here and now. Central America in 2018. What the heck happened?

The big story was – and still is – Nicaragua.

Back in April, President Daniel Ortega showed his true colors by cracking down on his own population and murdering hundreds over the course of the next few months. As I write at the end of December, the bulk of the killing is over but Nicaragua has turned into itself during the Somoza years where heavy repression now reigns supreme.

In fact, I’d say it’s worse than during the Somoza years, as Ortega has turned into the dictator he helped to oust. People are afraid to fly the flag or sing the national anthem and thousands of refugees have fled.

The most recent news out of Nicaragua over this holiday period is the arrest of journalists and the closing down of websites and publications that don’t toe the Sandinista party line. Can you say police state, anyone?

Nicaragua, always the poorest country in the region, was at least – before this crisis – one of the fastest growing and most promising tourism and investment-wise. Now all that promise seems a long way away, with experts predicting the Nicaraguan economy will contract by seven to ten percent in 2019.

So what’s the way forward here? It will take Ortega leaving office (preferably in chains on a flight to The Hague) for the country to heal and get back to normal. Will that happen soon? Don’t count on it. He’ll go eventually. These guys always do. But in 2019? Vamos a ver.

The country most affected by the crisis in Nicaragua this year was Costa Rica, across the southern border.

About 50,000 refugees have poured into Costa Rica from Nicaragua since the crisis started, adding to an already large migrant population from that country.

Costa Rica was the only country in Central America to have a general election in 2018, and for a while it looked like the arch-conservative religious fanatic Fabricio Alvarado might win on a platform comprising opposition to same-sex marriage and not much else. In a country still wracked with the Cementazo corruption scandal at the beginning of 2018, and a growing inequality gap among other issues, it seemed for a while that people had lost their minds just to focus on same sex marriage. I mean, really?

But sanity prevailed and Carlos Alvarado (no relation to Fabricio), a guy who didn’t write his policies on the pack of a cigarette packet the day before the vote, swept in on a landslide in the second-round run-off in May.

And he’s had his work cut out for him ever since.

Since taking office, he’s had the crisis next door in Nicaragua to content with, and Costa Rica’s own fiscal deficit problems, which previous administrations have kicked down the road for decades.

Kudos to President Alvarado for being the first guy in a long time to do something about bringing down the deficit and stopping Costa Rica from going over the cliff with his fiscal plan that eventually got passed.

I say eventually, because in passing this plan, a general strike crippled public services, disrupted tourism and the economy.

Another effect of the strike and the fiscal plan was the colon tanking. To those who earn in dollars, in the short term, this is no bad thing as you now get more colones to your buck (at least until inflation properly kicks in), but if your savings are in colones, you’re out of luck.

But on the positive side, a weak colon might well be good for tourism in 2019 as foreign travelers feel wealthier in Costa Rica with their dollars going further than they did before. We’ll see.

Crime and security, always a touchy topic in Costa Rica, rose to the forefront in 2018 with several tourist murders making international headlines around the world. I predict that a major crackdown on crime will take place in 2019 which will be a long time coming.

Elsewhere in Costa Rica, the issue that riled up Fabricio and his base at the beginning of the year reared its head again in November when the country’s supreme court ruled in favor of same-sex marriage. This paves the way for Costa Rica to become the first country in Central America to legalize same sex marriage, with the ruling set to take effect from the middle of 2020.

Another country making big international news in 2018 was Guatemala. And sadly, little of it good.

Volcan de Fuego erupted in June, burying local villages and killing at least 190 people. Thousands of people became homeless and all of this during a time of major political upheaval in the country over a never-ending series of corruption scandals involving President Jimmy Morales, who himself originally came to power on an anti-corruption ticket after the last guy disgraced himself.

Will the voters of Guatemala ever get a break?

I guess we’ll see in 2019. We’d like to see Thelma Aldana, the prosecutor who helped bring down Otto Perez Molina, the former corrupt president (before this current corrupt president) go for it. She’s aligned herself with the center-left Encuentro por Guatemala party, and although she’s no politician, she’s the people’s choice and might well be the last best hope for Guatemalan politics.

Watch this space in June.

For readers in the US, Guatemala and the other Northern Triangle countries of El Salvador and Honduras were newsworthy in 2018 for other reasons.

You can’t talk about Central America in 2018 without talking about the “migrant caravan”.

I’ll leave the opining from the US perspective to someone else. This isn’t about US politics. But for a while you couldn’t turn on a channel in the States without hearing about the caravan and sometimes it might be hard to imagine we’re talking about real people from Guatemala, El Salvador, and Honduras here.

Two Guatemalan children have died at the US border in recent weeks and I can’t help feel if Guatemala could get some good governance at last, without endless corruption scandals, perhaps they could take steps to stop people feeling the need to join these caravans. Same goes for Honduras and El Salvador. I guess I’m opining.

Talking of Honduras and El Salvador, what’s been going on in those countries this year?

Well, we’re often accused of neglecting these countries and I’ll be honest – we kind of do. Problem is, we have no regular writers in these countries to tell us what’s happening on a regular basis. Hoping that changes in 2019.

But back to the point. Honduras started 2018 in chaos with widespread protests after the disputed November 2017 election. To cut a long story short, Juan Orlando Hernandez took a leaf out of fellow despot Daniel Ortega’s book to overrule the constitution to become the first Honduran president to run for another term.

Since then, I guess we can call the Honduran psyche disgruntled. The OAS called for new elections, but that’s for the birds.

Like Guatemala, El Salvador will vote in 2019 and the story right now is about conflict with the US. Donald Trump is threatening to cut all aid to the Northern Triangle countries until they do something about preventing their citizens from joining the aforementioned migrant caravans.

Especially given that the US itself has no formal relationship with Taiwan and Donald Trump supports China’s “One China” policy.

One can’t help feel that the US’s stance against El Salvador here was more to do with historical hatred of the left-leaning FLSN and more posturing over the migrant issue.

In other El Salvador news, the country came under scrutiny in 2018 for its stringent anti-abortion laws and for Archbishop Oscar Romero being canonized.

So far 2018 seems to be just a torrent of bad news in this part of the world. Hey, I said it was a chaotic and messy one this year.

But Panama and Belize are two countries where things didn’t go to hell in 2018. At least not totally. And the ironic thing is that these are the two countries some don’t even consider Central American.

Compared to everywhere else in the region, both Panama and Belize had rather quiet years, just getting on with things.

I suppose the main news out of Belize was to do with safety and security. A Google search on Belize in 2018 pulls up no end of questions and articles about this topic. In his New Year’s address, Prime Minister Dean Barrow told Belizeans that crime and security were the greatest challenge to the country this year.

In 2019 Belizeans will vote on their territorial dispute referendum with Guatemala. They will determine if the International Court of Justice should step in to determine whether Guatemala has any claim over the country. Guatemalan already voted in its own referendum earlier in the year although the 25 percent voter turnout suggested they have other things on their mind. Will the Belizean turnout be higher? I would imagine so. At the other end of the Isthmus, it was business as usual in Panama. Panama inched closer to China, with a state visit by President Xi at the beginning of December. Trade, baby, trade.

Donald Trump watchers noted a tussle in Panama City when his Trump Tower in Punta Pacifica – Central America’s tallest building – had his name wrenched off the side to become the Bahia Grande (now the JW Marriott).

2019 is also an election year in Panama where voters will join Guatemalans and Salvadorans in choosing a new president. Something tells me that Panama’s election will be smoother and quieter than Guatemala’s and El Salvador’s, which is how it should be.

So what happens going forward in 2019?

I hope this coming year will be a lot less newsworthy. Looking back at our 2018 predictions article from last year, it’s clear no-one expected this year to turn out like it did. That’s part of the reason we didn’t do a similar article this year.

But if Nicaragua can find its freedom, if the Northern Triangle can find peace, if Costa Rica can haul itself from the edge of the fiscal cliff, then maybe 2019 will be a quieter, happier year in this part of the world.

I’m the eternal optimist and will continue loving life in this part of the world.

Thanks to all our readers and followers for a great first year of this website and we look forward to seeing you with even more in 2019.

Only Peru has a higher percentage of job losses in...

As Belize celebrates its 39th year of independence we look...

As the Guatemala airport reopens to international tourists after over...