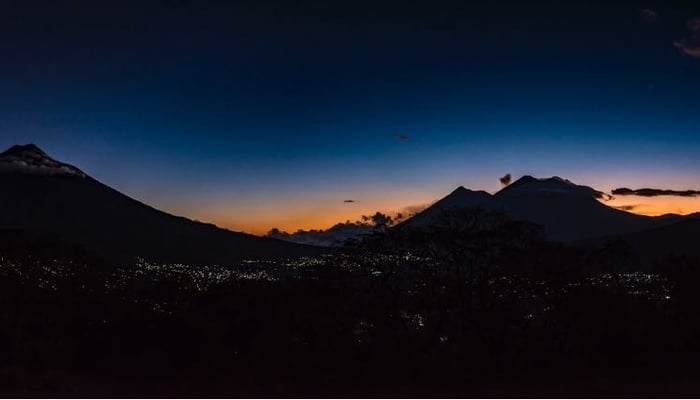 Honduras expat Paul McCurdy takes a road trip around Honduras, Guatemala, and El Salvador. Driving around Central America is, to him, a wonderful vacation and something people should not be afraid of…

Honduras, Guatemala, and El Salvador have a sketchy reputation throughout the world, there’s no point in lying about it. These countries make up Central America’s Northern Triangle and the news coming out of them is rarely good.

But living in Trujillo, Honduras, we know these countries are not as dangerous to travelers and tourists as the media makes out. So in March 2018 we decided to, at long last, take a road trip around our region.

We’ve been coming to Honduras for over twenty years but other than a trip to Guatemala in 1996, we’ve never explored the neighboring countries.

Our niece Kelly was coming down from Canada for a visit and also wanted to check out Guatemala and El Salvador. The perfect excuse to spread our wings and explore the Northern Triangle of Central America!

We decided on a ten-day circle from Trujillo, Honduras, across to Guatemala, down through El Salvador and back into Honduras and home to Trujillo. A total distance of 2,050 km. 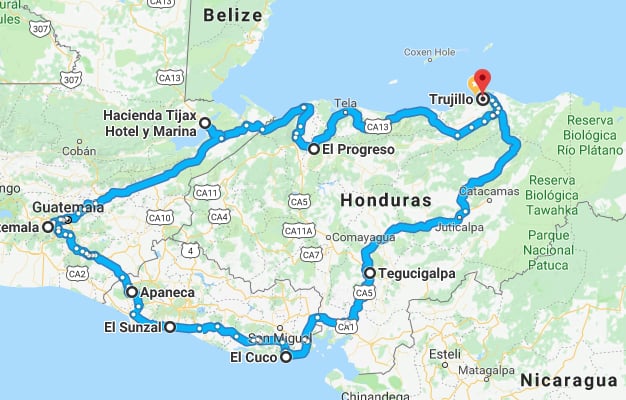 Our route (anticlockwise starting and finishing in Trujillo, Honduras

The road west out of Trujillo was in poor condition after the brutal rainy season of 2017. Potholes everywhere accompanied us as we started out from home.

This is common on the road between Trujillo and La Ceiba after the rainy season, so we took it in our stride. Most years they fix them by Easter to prepare for the holiday traffic.

The Honduran government has committed to concreting the Trujillo-La Ceiba road… someday. They’re also planning another new highway along the coast which would cut the three-hour drive in half… someday.

The drive from Trujillo to San Pedro Sula took six hours and we spent the night at the Metrotel Hotel, a no-nonsense, no-frills airport hotel to wait for our niece’s flight.

The next day we picked up Kelly at San Pedro Sula airport to start the road trip proper. It took two hours of driving (and catching up) to reach the Guatemalan border at Corinto.

It was 3:00 pm and the border was easy on this snoozy afternoon.

We parked, presented our passports, and were through within a few minutes. They didn’t ask to see our car registration or any other papers. We drove to Rio Dulce in two hours, arriving at sunset. 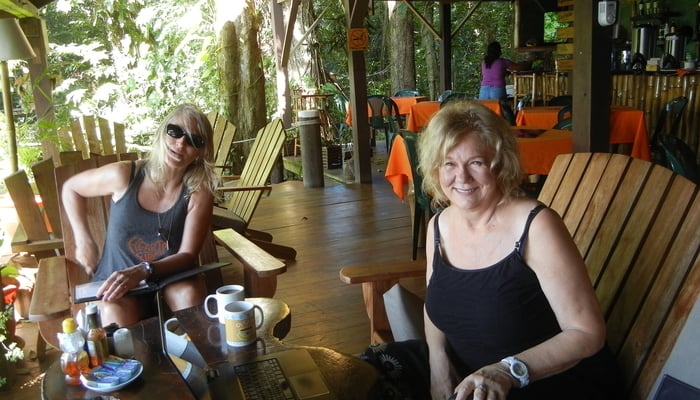 Our hotel for the night in Rio Dulce, Guatemala was the Hacienda Tijax.

It’s a beautiful setting with rustic two-person cabanas, many on stilts over the water. But because we were three, we had to use one of the two-bedroom ‘family’ cabins. With the bathroom on the floor below the bedrooms, it wasn’t the best arrangement.

The next morning we enjoyed breakfast in the open-air bar near the water and then started off on the six-hour drive to Antigua.

Outside of Guatemala City, we met a lot of construction work on the road. They were cutting a new path through the mountain, something that impressed Kelly, who actually teaches road construction in Canada. Despite that, the construction work slowed us down and we didn’t reach Antigua until evening.

Antigua is a lovely Spanish colonial town set in a valley ringed by volcanoes. 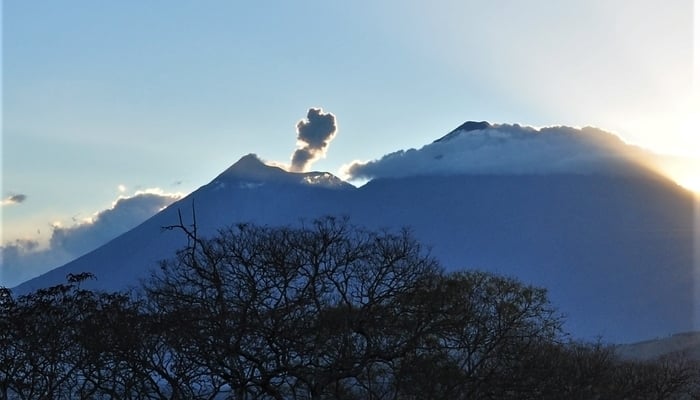 We booked into the eclectic and comfortable La Villa Serena, complete with a view of Volcan de Fuego smoking outside the city, part of its ongoing eruption since 2002. Volcan de Fuego has been going off so long now the locals aren’t bothered at all!

We spent the day exploring Antigua and picking up souvenirs. So many great restaurants but we enjoyed Las Palmas most. Great decor, excellent food, and live soft rock in the bar.

Later we headed over to the Cactus Grill for some live New Orleans-style music. There was a jazz festival happening in town although we missed the evening show outside the cathedral. 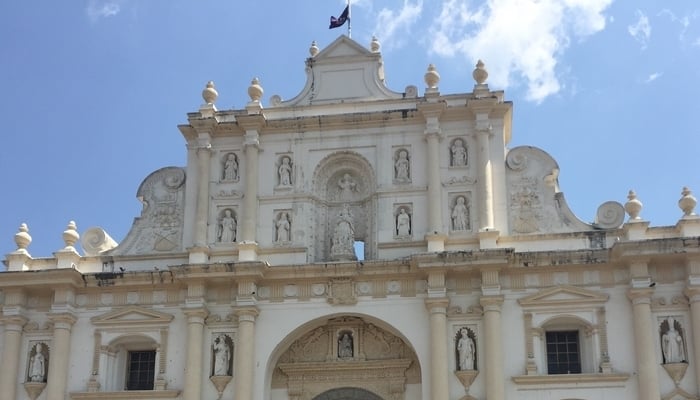 The next day we met two friends from Guatemala City for a tour of the area.

We started at the beautiful La Reunion golf resort on the slopes of the still-smoking Volcan de Fuego. After a superb breakfast there we stopped at the lava river where we picked up a few souvenir lava rocks.

We then visited a coffee plantation. Here we learned the differences between Arabica & Rustica beans, why they graft one to the other (Arabica for the flavor, Rustica for the strong root system), and why women pick the beans (smaller and more nimble hands). We toured the processing facility and ending with an afternoon cup of – you guessed it – coffee. 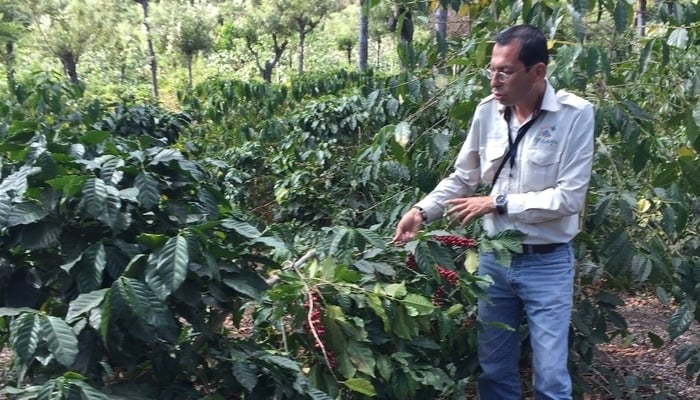 Our day ended at Tenedor del Cerro at Hotel Casa Santo Domingo outside Antigua. A stunning location with imaginative grounds.

We enjoyed a super dinner and watched the sun go down over the smoldering volcano.

We spent three days and nights in Antigua, enjoying good food, listening to excellent music, and wishing we had more time. Next time we’ll plan a longer stay. 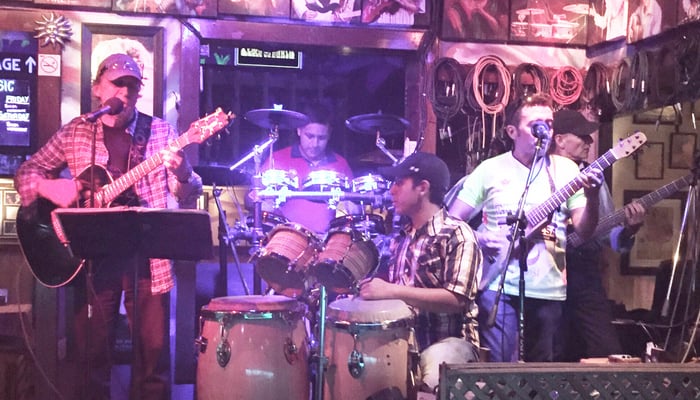 But El Salvador beckoned, and we needed to move on.

The border from Guatemala to El Salvador was an adventure. As we were lining up, three men approached us, saying they were with the government. They wanted our passports and car registration info.

I followed them into the office and discovered they weren’t officials at all. They were looking to make a few bucks by helping us.

I took all our papers back, got the required stamps myself and gave them $2 for pointing me to the correct place. After that, it took about 15 minutes doing the paperwork and another 30 minutes with the border guard, trying to convince him we would not sell our car in El Salvador. After his supervisor came out, I again showed him the registration paper, telling him we bought it four years before when we moved to Honduras.

That seemed to do the trick, or maybe he gave up on our limited Spanish.

Outside of the border, it was a four-hour drive from Antigua, Guatemala to Apaneca on the Ruta de Flores.

We stayed at the Hotel y Restaurante Las Cabañas de Apaneca, which despite its name did not serve dinner. Instead, we went to a local pupuseria for our first pupusas in El Salvador. Delicious! 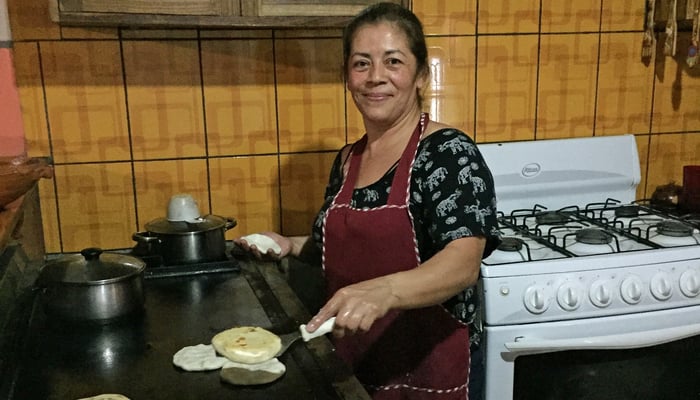 It was a tiny but popular place. We met a Salvadoran family there originally from the area but now living in San Francisco. Small world as we spent fifteen years in the Bay Area before moving to Honduras!

Back in our room, we enjoyed the peek-a-boo view into the garden through the clapboard siding. It had a cold shower, but at least it was clean and the people working there were friendly!

Starting early the next day, it was only two-and-a-half hours along the coast to our next destination, with fantastic views along the way.

In Playa El Tunco we had reservations at La Guitarra, right on the beach. A simple hotel, but with comfortable small cabanas, decorated with the names of famous guitar players along the paths.

El Tunco itself is small, with lots of surf shops and bars. We ate dinner at a place beside our hotel, from where we could watch everyone surfing, or trying to!

The following day we had a wonderful cup of coffee at a small place run by a Salvadoran and his wife. Accompanied by a breakfast bagel, homemade yogurt, and a smoothie, we were all set for the morning. 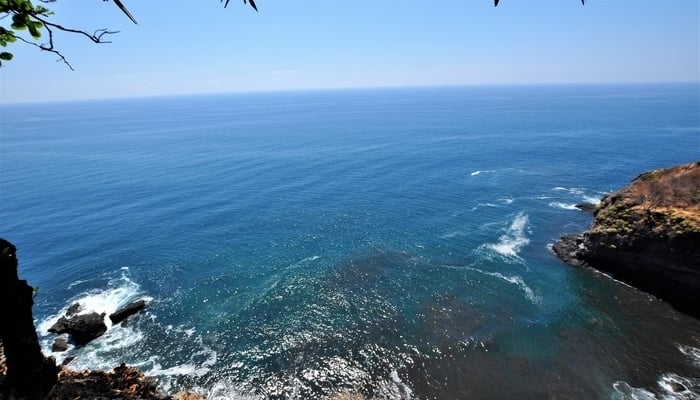 We drove to the more rustic El Cuco, also on the beach about three hours from El Tunco.

Our cabana was in the gated Tropiclub Playa. It was a comfortable room (with hot water!) and there was a pool to enjoy.

But compared to El Tunco, the Tropiclub was plain and uninteresting and the meals just adequate.

In the morning, Kelly and I walked two miles into the tiny town, along a dusty road, in search of pupusas for breakfast. Success. Yummy!

It was a ninety-minute drive from El Cuco to the border with Honduras, at El Amatillo.

Our final border crossing was quick – twenty minutes – but travelers beware! When Kelly flew back to Canada a week later, they fined her over $200 because she didn’t have an entry stamp in her passport from that crossing. Although we thought we did it okay, somehow they didn’t stamp her back into Honduras. So when you cross borders in Central America, make sure you get your entry stamps!

The drive from El Amatillo to Tegucigalpa should take three hours but again road construction like we saw in Guatemala delayed us.

We spent long, hot hours inching our way through the mountains before we reached the capital. But the new road will be superb once it’s done.

We arrived at the Florencia Plaza, which also has one of the better restaurants in Tegucigalpa.

Turned out the Florencia was hosting a Harley Davidson event – interesting seeing all these Central American bikers in their club colors. The band was loud (and good!) but things quieted down by the time we headed to bed.

In the morning we started back home to Trujillo. Alas, on our way out of Tegucigalpa, we got lost (you failed us, GPS!). We ended navigating our large Land Cruiser for two hours through a packed market that seemed to go on for miles. How we didn’t have an accident or run over a pedestrian I’ll never know. 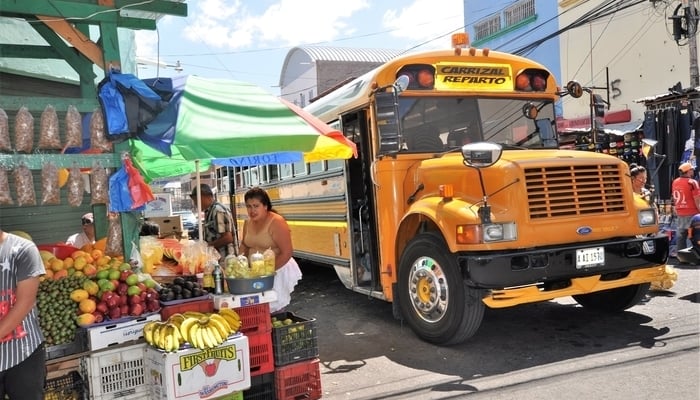 We finally made it out and onto the new highway between Tegucigalpa and Trujillo. This is a well-built road and cuts the travel time a lot. It’s now down to a six-hour drive and we were home by nightfall.

At no time on our travels did we feel threatened or intimidated. Whether stopping for fuel, food, restroom breaks, or whatever, everyone we met was always friendly and helpful.

That said, we always tried to make our destinations before dusk. But even on the occasions when we walked around at night we never felt unsafe.

All in all, a wonderful week of traveling, even with the delays due to road construction and lost GPS signals. Next time Nicaragua, Costa Rica, and Panama? Why not? 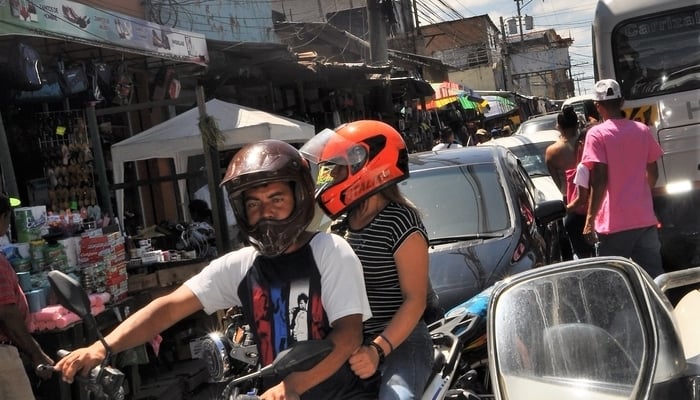