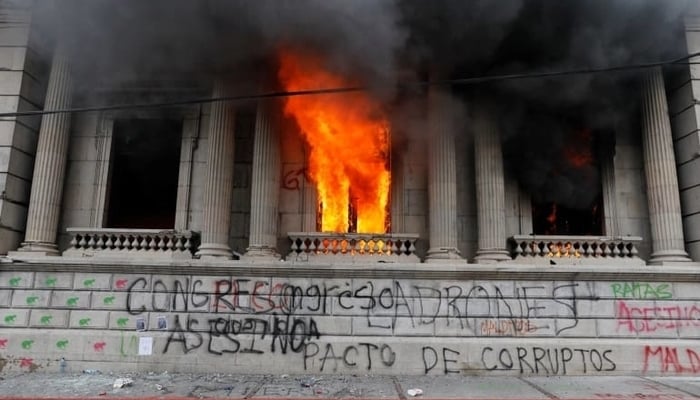 As Guatemala labors under yet another political crisis at the end of 2020, Nestor Quixtan offers a handy guide to the main points of contention in the Land of Eternal Spring.

On the surface, the latest political crisis in Guatemala appears to be over the current administration’s opaque dealings.

Protests erupted last weekend demanding the President veto the 2021 budget bill. The Guatemalan National Congress approved the bill in the middle of the night after a supposed “marathon” session.

The press blew the lid off the bill by revealing that roughly 40% of the entire budget would be financed by debt. The administration has already hiked the national debt by receiving several loans and emergency lines of credit to deal with the COVID pandemic.

Indignation led to the filing of around eight different lawsuits, asking the Supreme Court block the bill. Meanwhile, the destruction caused by hurricanes Eta and Iota has left much of northeastern Guatemala under six feet of water.

To compound the problem, the Guatemalan government’s intolerance to criticism has led the situation to a boiling point. A coalition of social/student organizations and private citizens led the first mass protests since the 2015 movements that ousted former president Otto Perez Molina.

Yet, there is far more brewing beneath the surface. In this article, we’re going to explore six causes that have led to the largest political crisis facing Guatemala in half a decade.

1. Instability in the Justice System

The justice system was severely hit by the proposed 2021 budget.

The current administration has also turned a blind eye to the systematic weakening of the Public Ministry. Ever since the Jimmy Morales administration lobbied the President Trump for support in closing the UN anticorruption commission, prosecutions have stalled. Many high-profile cases have waned due to a lack of support.

Furthermore, the National Congress has dragged its feet in electing magistrates for the various courts. In other words, the current administration has been quite soft in strengthening the government’s ability to prosecute criminals of all sorts.

A Guide To The Jimmy Morales Vs CICIG Guatemala Crisis https://t.co/FxPdwhnqOA#Guatemala #CICEG

A very public falling out occurred between President Giammattei and Vice-President Guillermo Castillo.

The main sticking point has been over the so-called “Government Center” commission. The commission was created by President Giammattei as an ancillary arm of the Presidency. But the functions of this commission have attempted to usurp the functions of the Vice-Presidency. This conflict led to the Vice-President publicly withdrawing his support for the President, especially over the mitigation of the COVID-19 pandemic.

Last week, Vice-President Castillo called for both himself and the President to resign from their positions. The intention behind this call was to “oxygenate” the government’s capabilities.

The President shrugged off the comments by replying that all was well between the two of them.

As the #Guatemala airport reopens to international tourists after over six months, Nestor Quixtan looks at the situation and explains why the news is decidedly muted amid the rumblings of more political storm clouds.https://t.co/oUD7SwTIbW

3. Management of the COVID-19 Pandemic

At first, Guatemala was seen as a poster child for the way the COVID-19 pandemic should be handled.

Since then, lack of transparency, inconsistency, and contradictions have ruled the government’s response to the pandemic.

The Health Ministry, the Presidency, and the COVID Czar Dr. Asturias have all contradicted one another. The lack of consistency in the case and fatality numbers have trashed the government’s credibility. Earlier this year, Dr. Asturias publicly stated that underreporting of positive COVID cases was at least at a 10-to-1 ratio.

The drastic lockdowns have stifled economic growth. The press and private sector have called for the government to do more to support economic recovery. The government’s response has been tepid, at best. Stimulus payments took months to reach needy families. Hospitals collapsed at the peak of the pandemic, while frontline workers never received adequate personal protective equipment or supplies.

With deaths piling up, health authorities out of ammo, unemployment and hunger soaring, and remittances plummeting, it’s only a matter of time before the wheels begin to come off.#guatemala #CoronavirusGT https://t.co/plbxvizdgG

This month, two hurricanes devastated much of the northern and northeastern Guatemala. Hurricanes Eta and Iota hit within two weeks of each other, causing loss of life in landslides and leaving entire communities flooded.

The government did nothing to prevent this disaster. Flooded communities were never evacuated, despite forewarnings from neighboring Nicaragua and Honduras. Once the storm hit, the government was unable to provide any type of immediate response. A handful of helicopters from Guatemala’s beleaguered Air Force set out to drop humanitarian supplies to communities isolated by the storms. With roads completely blocked by landslides, aid took days to arrive. The efforts of the Guatemala Army enabled soldiers to reach those communities completely cut off.

The current situation is desperate in many of the flooded communities. Hundreds of families have lost their homes and all their possessions. The government still has no clear response despite clamoring for international help.

After the passage of Hurricanes Eta and Iota, the situation in Guatemala is also critical.

There are 1.2 million people affected and 900,000 out of them need immediate humanitarian relief. The Guatemalan #RedCross continues to support communities affected by the disasters. pic.twitter.com/jGSgSLzcZ5

The outcry over the 2021 budget is based on the roughly 40% of the budget being financed through debt. Guatemala has already had its sovereign credit rating downgraded by credit rating agencies. In particular, Fitch has issued caution over Guatemala’s foreign debt.

Additionally, the lack of transparency in the discussions before the budget’s approval detonated the massive protests. When questioned about the budget’s financing, the President responded with saber-rattling.

Some 10,000 people gathered on the streets of Guatemala’s capital city to protest the government’s 2021 budget, which would facilitate corruption. https://t.co/OdaXCXFFfj

When the protests hit the streets, the government immediately responded with force. The newly-appointed Interior Minister of called the protestors criminals and vandals over the torching of the Congress building. The National Police responded by using excessive force on protestors. Numerous cameras captured the beating of protestors and journalists. The National Police Chief responded by stating they were only following orders.

This excessive response has led to calls from international organizations, the UN Commissioner on Human Rights, and donor nations to investigate the use of force to quell the protests. The government has tried to stonewall these allegations, but doesn’t seem to have any type of answer to them. Whether any type of sanctions stems from these acts or not, there’s no denying the footage.

“I think this is just the beginning.”

Thousands of protesters took to the streets of #Guatemala today and some set a fire in congress, after a controversial budget bill brought a series of long-simmering crises to a boiling point.

In conclusion, the Giammattei administration looks to limp across the 2020 finish line.

With roughly five weeks left of the year, Guatemalans are sick and tired of repression, lockdowns, corruption, and lack of help from their elected officials.

One irony is that President Giammattei was one of those publicly calling for former-President Perez Molina’s resignation in 2015.

It seems that history has played a cruel twist on him.

Covid in Central America After a Year: A Look at the Numbers and a Plea to Get Back to Normal

Exactly a year into the Covid pandemic, we take a...