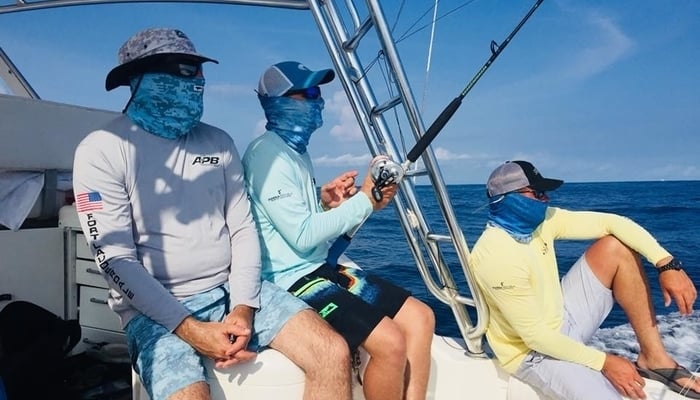 Ever since I moved to Costa Rica in 2009, fishing has been my passion.

And as I reflect on my time in Costa Rica, I recall all the wonderful fishing opportunities I’ve had, and April 2018 ranks with the best.

Since becoming the Fishing Specialist at Namu Travel, I’ve fished with some of the best captains in the world. But nothing prepared me for the 2018 Offshore World Championship in Quepos.

It started with a conversation between me and Samantha Mumford from Premium Marina Services. We were chatting about the work that needed doing on my boat, Caribsea. We’d blown the motor and needed a complete overhaul.

After telling me how much this would cost we started discussing fishing tournaments and somehow the idea of my joining her in the Offshore World Championship came up.

This was exciting as Samantha is one of the best bill fishing anglers in the world. Could I fish with her? 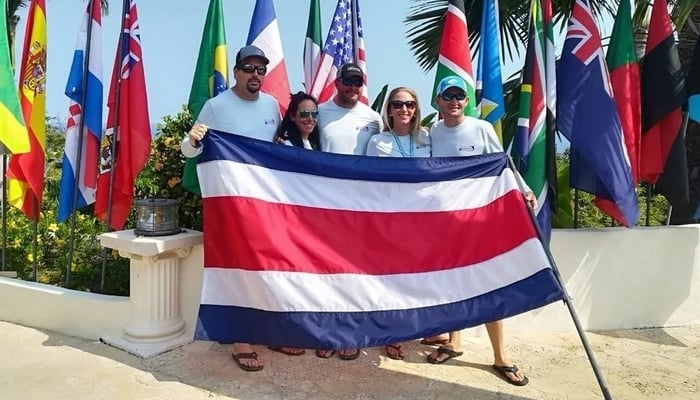 Samantha had qualified for the 2018 Offshore World Championship after winning the Quepos Billfish Cup in 2017. And now I had the chance to join her in representing Costa Rica.

I was nervous and excited all at the same time. There would be 251 anglers from thirty countries split into 52 teams. To say there was pressure is an understatement.

The dates were set: April 15-20, 2018. Four days of the most competitive sportfishing I will have accomplished so far.

As the tournament approached, we entered the Marina Pez Vela Open as a warm-up since our team had never fished together. 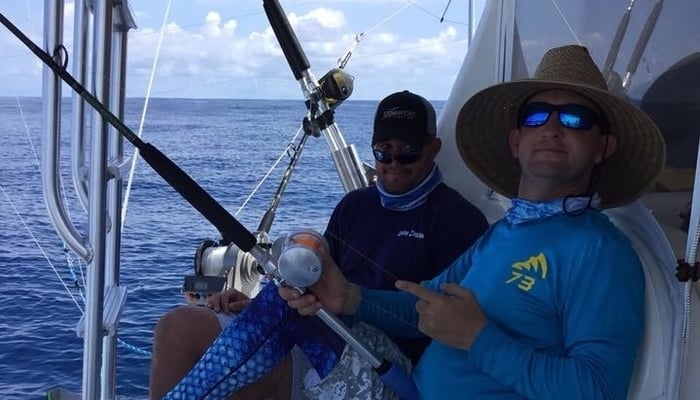 The Marina Pez Vela Open is a two-day tourney that ran April 13-14, and we were with Captain John Mumford aboard the Billfish.

Our team comprised Samantha Mumford, Josh Garst, Nicky Branciforte and me. Did I mention this was the first time we’d ever fished together?

The first day started off with a bang. We sat in second place with one blue marlin and four sailfish. Day two found us pumped and hoping lady luck was on our side. This was a slower day with four sailfish. But we ended up in third place, one sailfish from winning.

I’ll never forget what John Mumford told me on the way back in about our missed sailfish. He said “one fish” was the story of his tournament life.

But that was okay. The beauty of this sport is that skill and luck are both needed. And fishing with true pros like these meant I was bumping my angling game up to the next level. 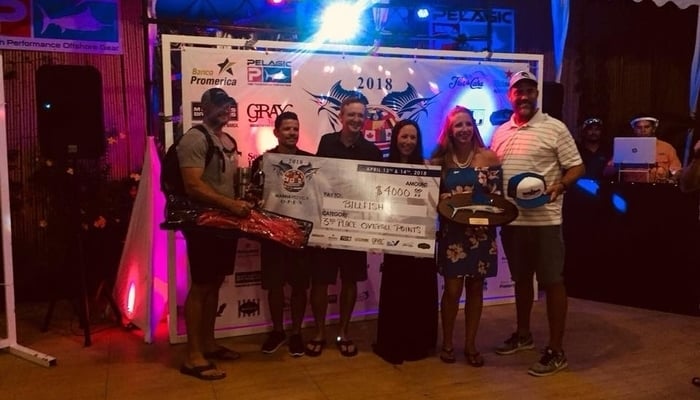 So we had a podium finish at the Pez Vela Open and an excellent team. It was time to take on the 2018 Offshore World Championship.

Our team was the same but with the welcome addition of Parker Bankston.

The Offshore World Championship is a round-robin boat set-up. This means we would fish with a different boat and crew each day, a first for me.

Like the pressure was not high enough already. Not only were we up against world-class anglers, we also had to learn different patterns and boats each day. Nothing like keeping it interesting.

Day One – Fishing aboard Permit III out of Carrillo: 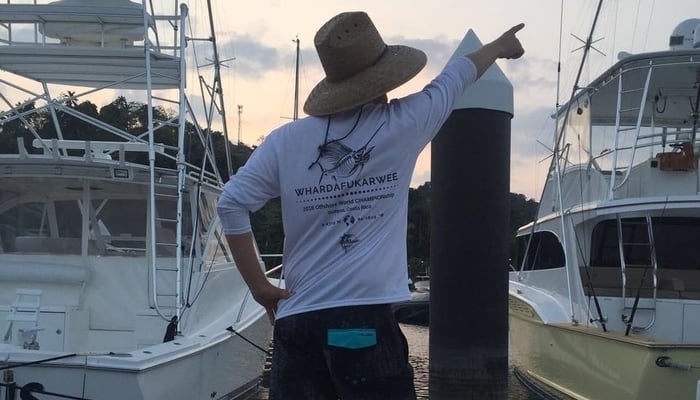 When we first boarded Permit III, we loaded up our gear and brought along some of our dredge equipment to help raise fish. The morning was slow, but we made up for it with shots of Fireball, shotgunning beers, and some great laughs.

By 2:00 pm our thoughts of competing were fading away, and we looked up at the captain with hopeful eyes.

He looked back and said, “My boat has never raised fish with a dredge.”

We didn’t understand what he meant at first, but suddenly it clicked and we scrambled to pull in the dredge. Thirty minutes later, fish on and our one and only sailfish for that day.

As we headed to the dock, all we could think about was the dredge and how we shouldn’t have used it.

We wrapped up the day in 38th place, the slowest day for us.

Day Two – Fishing aboard Macushla out of Los Sueños: 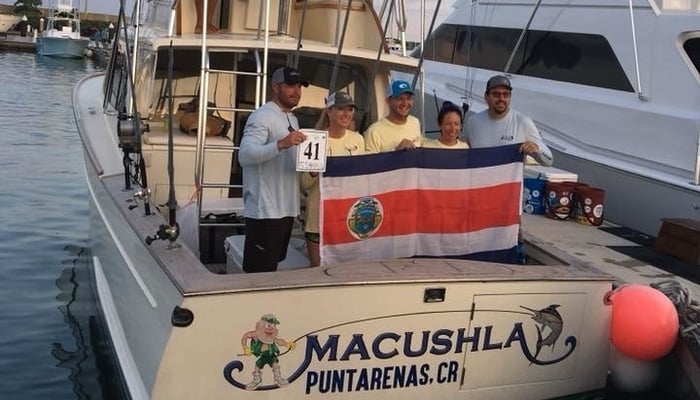 It was great to get the Macushla for Day Two. Captain Johnny had won the top boat and top captain prizes last year, and we just knew this would be a good day.

But as we boarded the boat, there was an unsettling scramble taking place and the port motor would not start.

We sat around for about thirty minutes while the crew checked all the systems. In the end, a little brute force solved a stuck starter problem. We were ready to go.

Then, as we headed towards the marina entrance, someone asked for a piece of chicken.

We looked at each other and realized we’d left the lunch on the kitchen table. How could this be? Our most hopeful day was not starting off well. 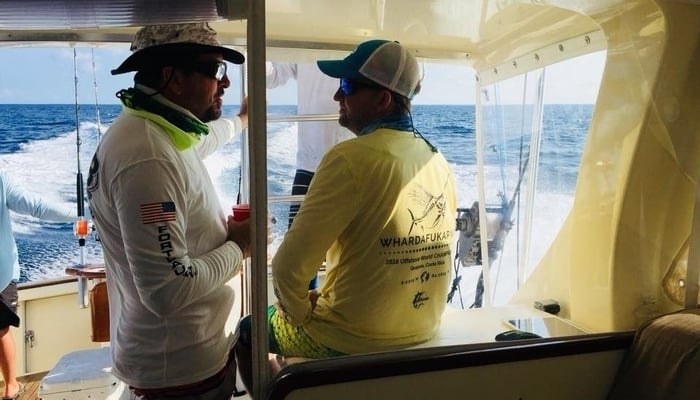 Captain Johnny was like, no problem, and turned the boat around. We headed back to the dock and ran to get bread and sandwich meat. Here it was one hour later, the competition was starting soon, and we were still in the marina.

“Don’t worry, this boat is fast,” said Captain Johnny, and it was.

We shot out and got to our fishing grounds with ten minutes to spare before lines in.

The day was as perfect as we could have asked for. We went six for six on sailfish and finished top boat for the day. This moved us up to sixth place from 38th. 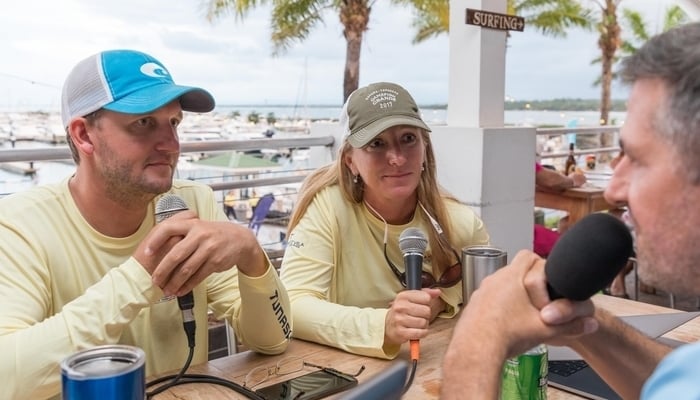 Day Three – Fishing aboard Sweet Dreams out of Los Sueños:

We felt good going into Day Three on Sweet Dreams despite knowing the bite was slow for everyone. We had an incredible team though.

The morning started out nice with two sails released. Then, things got interesting. 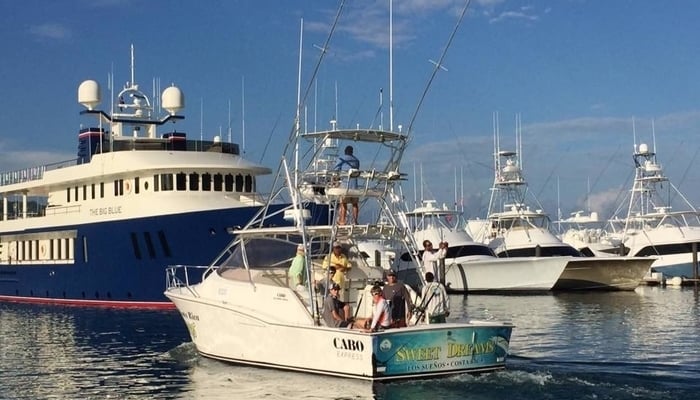 Parker was checking a bait to ensure it was swimming right and let the ballyhoo back a bit. At that moment, a blue marlin showed up and ate our smallest setup. Out of the blue, on a bait that was not in the spread.

A small panic ensued, and we cleared the lines. But before we could get things ready to chase our fish, the line went limp and reality set in. Our marlin chaffed through our 50lb leader.

So a few more shots of fireball, a few chugs of beer, and we are back online. We finished the day out with four for five on sails and the lost marlin. The third place was now ours and more drinks were in order back at the marina. 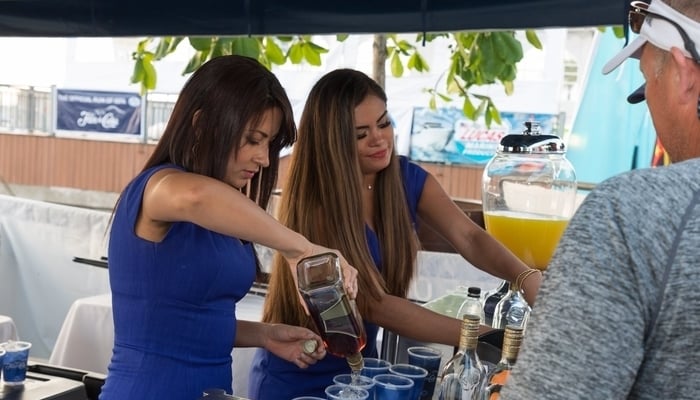 Day Four – Fishing aboard Monkeyshine out of Marina Pez Vela:

Our hopes and our confidence were high for this, the final day on our final boat, the Monkeyshine. 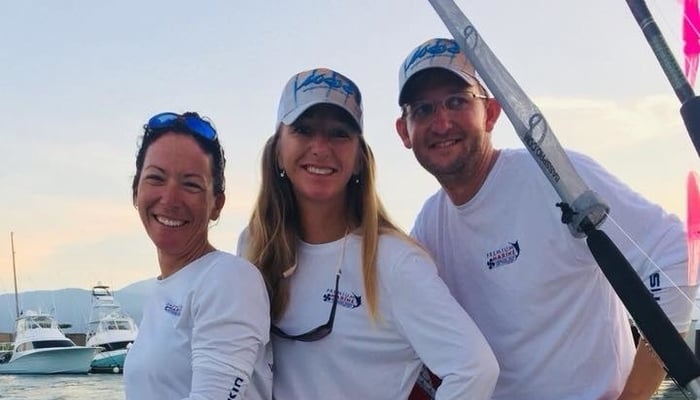 Nicky, Samantha, and me on the Monkeyshine / Justin DeBoom

Since there was one consistent in our success, we started our Fireball tradition early and brought an extra bottle to be sure.

The morning started out with a sail and then the tax man showed up. We had felt so confident and everything had been so right, but it was time for us to pay our dues.

We lost the next three fish, including a double, and morale was low.

The day grew long, but thank god for Fireball and beer.

At long last, as the end of the day neared, we shook off the black cat and grabbed another sailfish bringing us to a two for five on.

As we got within cell phone range on the way back in, reality set in as we learned how we’d done. We finished in sixth place and one sailfish would have put us in third for a podium finish in the Offshore World Championship. 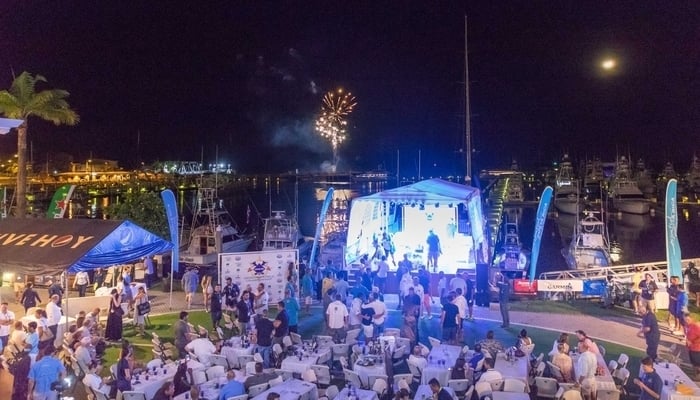 As this sank in, all I could think about were the words Captain John Mumford said during the Marina Pez Vela Open.

But the experience I gained from this competition was like nothing before.

There were teams from all over the world with different skill sets.

But one thing was consistent across the board (apart from the Fireball). They were all champions and had to win a qualifying tournament to even be there.

This was one of my greatest fishing achievements and to say we finished sixth out of 52 is an accomplishment in anyone’s book. 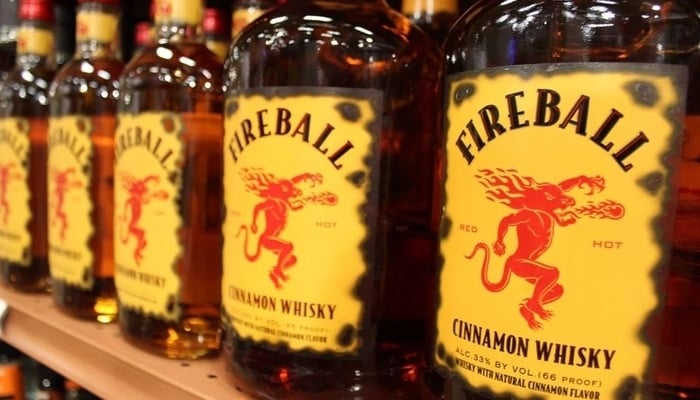 Fireball: The fuel that got us through the 2018 World Offshore Championship / Fireball Costa Rica Facebook page