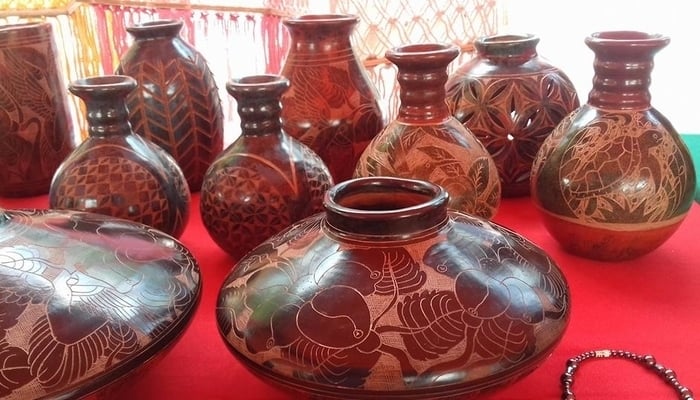 In Nicaragua, you’ll find many hotels and homes decorated with pre-Columbian or colonial-style objects. But are they really authentic? And when looking for art in Nicaragua, where do you go for true artisan authenticity?

Nothing jars my sensibilities more than mismatching objects or artifacts to represent a particular period or locale.

Folks trying to market the colonial part of Nicaragua; Granada, Leon, and one or two other towns need to study up on the items they use to furnish a hotel, office, school, or museum.

In November 1856, William Walker erased the past of Granada when he burned the town down. When the fires went out, he sent soldiers to restart them to ensure the town’s destruction.

As a result, I doubt much of anything, including furniture and furnishings, survived. Walker destroyed the major churches, La Parroquia, San Francisco, and Guadalupe. When Thomas Belt, a mining engineer, rode through Granada a few years later, he mentioned riding around big piles of ashes and burned down buildings to get through town.

The La Merced Church was pretty well shot up in the 1854 revolution and the convent that was probabaly next to the church disappeared. Walker’s men destroyed two other churches. They also burned down Walker’s house, today the Pellas house on the southwest corner of the plaza.

We know this because artists drew and published detailed pictures of these churches before Walker’s fire. They were later rebuilt but quite changed, as was Walker’s house. We have drawings of the outside of Walker’s house and of his study inside. It ain’t the same by a long shot.

I note these details because I get my sensibilities offended when I go to a colonial-style hotel/restaurant/museum and find furniture/furnishings/ceramics – ostensibly pre-Columbian and colonial – that doesn’t look at all like anything pre-Columbian or colonial.

As for ceramics, getting pottery from San Juan de Oriente can be disillusioning.

The artists there mix and match time periods, colors, shapes, and icons on pots for sale. What they sell may have the shape of one period, the icons of other periods, and colors never used in pre-Columbian times, like green and bright blue.

One type, called Pataky polychrome, a burial urn named for a collector who had a large collection of counterfeit pots. So the visiting archaeologists named the type variety for him.

Gentle reader, pre-Columbian artisans did not use oil paints.

And as for furniture, everything I’ve ever seen in Granada, Leon, or Managua, is post-1860, with one exception. That also goes for all the furniture I’ve ever seen for sale.

One should also note that they didn’t use Swedish contemporary styles in colonial Granada. Most furniture makers in Masatepe make a lot of this furniture, which shows up all over Granada and Leon in pricey hotels, restaurants, and museums. It does not have to be this way.

For a colonial look, it only takes two things, the commissioning party to study the true pre-Columbian and colonial styles, and an artisan who can duplicate what is an accurate representation of the past.

For pottery, the rarest pottery is not pre-Columbian, but colonial.

In 25 years I only found two colonial pieces in all the collections I viewed. Edgar Espinoza, then chief state archaeologist, and I did a dig at Leon Viejo in 2003 and found Spanish colonial pottery, tin-glazed and made in Seville, and about a dozen Ming dynasty porcelain potsherds.

And one private museum in Sebaco has a surprising amount of more utilitarian colonial pottery. To date, that’s about it. Once you know what they have found, it’s easy to go online and print out pictures of authentic Spanish and Chinese pottery.

Once you determine what these items look like, you can duplicate them if you can find a master artisan to do the work.

For both pre-Columbian and colonial pottery, I recommend Teódulo Potosme, of San Juan de Oriente.

He is the only potter I have found who can duplicate anything asked of him, exactly, with no modifications. A key is that he uses the same clay as the pre-Columbian potters did. He uses pigments – not paint – to color the pots when he fires them, and he fires them in a hot straw fire in a primitive oven, not a format kiln.

He does not use a potter’s wheel for his pre-Columbian pottery objects. Also, he puts the name of the owner or his name on the bottom of the pot, so no-one can palm his work off as pre-Columbian. 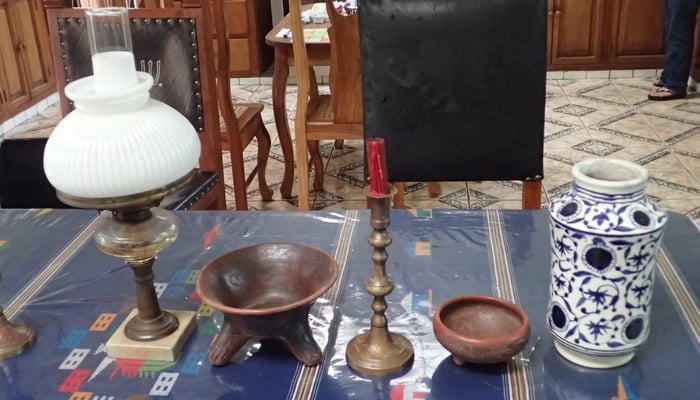 From two feet you cannot tell an original from his representations.

For Spanish colonial, the types Sevilla blue on blue and white on blue, are what he has done, in the form of pitchers, alborellos, or apothecary jars, and 15th and 16th-century plates.

He makes these on a potter’s wheel, and modern pigments and glazes for the tin glazes and colors, including cobalt for the bright blue. His work is the exact same as the potsherds we found at Leon Viejo.

He has not made porcelain yet, though we have enough potsherds. Porcelain calls for very pure paste and a super hot kiln, and he has not found one yet.

Like his pre-Columbian pottery, from two feet you can’t tell his modern representation from an original.

I’ve spoken to potters in Mexico and Guatemala, and his work is as good as their finest.

I once took a liking to a late 18th-century bishop’s chair in a museum in Chihuahua. I took a photo and looked for an artisan.

Danny Carranza, past Masatepe towards Catarina, came recommended to me so I commissioned him for the bishop’s chair. I gave him a big chunk of madero negro wood, hard and heavy, and Danny made the chair.

For the black leather seat covering, I found an old tannery behind the Diriamba Cemetery and had old Joaquin Martinez tan a cowhide for me the old-fashioned way, colored black.

The tannery does not smell good, but it’s authentic, and not plastic. The leather smells like, well, leather. I found Joaquin when I skinned a cow and wanted to tan its hide. He did a fine job, and the hide sits in front of my fireplace.

Spanish colonial homes and hotels used lots of animal hides – goat, sheep, and cow – and they scrub up well in my study. 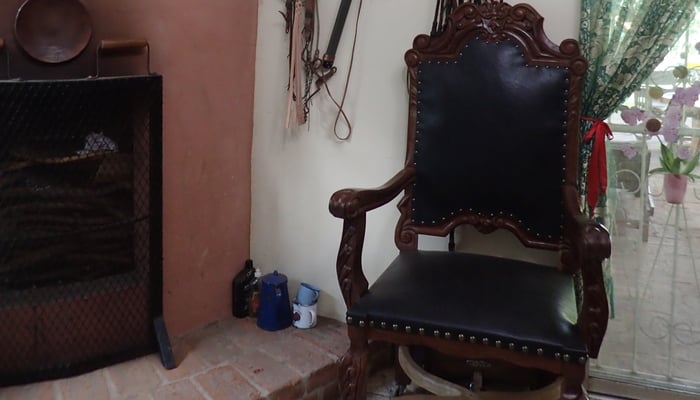 So if you want to market colonial and pre-Columbian Nicaragua, get furnishings that look the part.

Both Teodulo Potosme and Danny Carranza can make anything you want and it will be authentic, if not old. And old Joaquin, behind the cemetery, can tan your hide.

Making modern reproductions does not cost more than commissioning goofy looking modern furnishings. It only takes a little research and imagination.

Pat Werner is a longtime resident of Nicaragua, arriving in 1987. He lives outside of Diriamba with his wife Chilo. More of his work can be found on his Nicaraguan Pathways website.