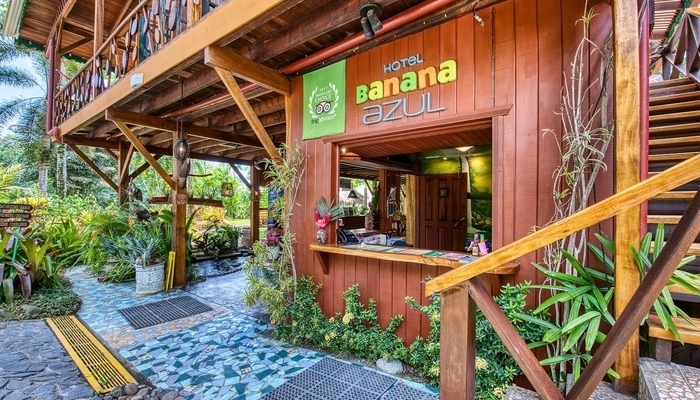 Let’s Talk Tourism is a series of videos from Namu Travel Group founder and CEO Casey Halloran. In the videos, Casey talks to movers, shakers, and experts in Costa Rican (and Central American) tourism. His goal is determine the state of the industry during the current pandemic and beyond. In his latest episode, he talks to Colin Brownlee, owner of the Hotel Banana Azul in Puerto Viejo.

Colin’s a man after my own heart. A marketing guy who ended up in the Costa Rica tourism biz… like me. I’m the first to admit I don’t get over to Costa Rica’s Caribbean side anywhere nearly enough, but I love it over there, and I love staying at the Banana Azul.

Colin’s a great ambassador for Puerto Viejo and the Caribbean. He’s also an advocate for LGBT tourism, and has been making noises this year about getting Costa Rica into the 21st century regarding remote working visas and attracting digital nomads.

In short, he’s a super-interesting guy and I always enjoy chatting with him.

Below are the highlights of our conversation. We’ve outlined the essence of what we were talking about rather than providing an exact transcription. To see the whole thing, please watch the video below:

Your hotel in particular – and the Caribbean side in general – seems to have been popular with domestic tourists this year. Pleasant surprise?

Yes, a big surprise. We’d say that around one in every three or four Costa Rican guests have never been to the Caribbean side before. They’re surprised to discover this part of the country exists!

So take us back in time. How did you end up in Costa Rica and how did you get into tourism?

I used to work in marketing and advertising in Canada, since my early 20s. And I loved it, especially when it was back in print. But as it got more digital, I found myself talking to customers less. It became all about money and data, and not fun anymore.

The money was better but the job itself no longer appealed and I stopped enjoying myself.

Then I took a trip to Hawaii and stayed a a small boutique hotel, rather like the one I created. I looked at it, and at the person running it, and knew I wanted to do the same thing.

I chose Costa Rica because it was up and coming – this was 20 years ago – and the same time zone as North America with a lot of the ingredients I wanted.

Then on an internet search I came across a little town called Puerto Viejo which impressed me from afar.

Bohemian, funky, a sleepy beach town, you know? So I visited and it exceeded my expectations. I then traveled all over Costa Rica looking for something better, but never found anyplace I loved more than Puerto Viejo. I felt that was my best choice.

What year did you get started?

I moved to Costa Rica in January 2005 and the hotel opened in April 2007. That’s the year the financial crisis hit, but we never noticed because we were still small and growing.

What were some of the early challenges?

Given that I’d never swung a hammer, construction was a challenge for sure. Building a hotel in a foreign country in a different language. Back then we didn’t even have a cement mixer. We had over 3,000 square feet of cement space and did it all in a wheelbarrow. Those challenges never ended and still continue to some extent.

What are the biggest misconceptions people have about the Caribbean coast of Costa Rica?

Crime is the biggest misconception. I’m not underplaying crime, it exists here like in every tourist community and we go through ups and downs. But there always seems to be more focus in the media on the Caribbean side.

You can read about a crime taking place in, say, Guanacaste, and it’ll be paragraph three by the time they tell you where it occurred. With the Caribbean side, that’ll be the headline. So that generates misconceptions.

But things have improved over the years I’ve been here, there’s more policing and community policing than before.

Another misconception is the weather.

People always think it’s raining here. You look on the Weather Channel and it always says Puerto Viejo is raining or going to rain. That’s almost never the case.

Most of the rain comes at night and we have palatable weather. It’s not like Guanacaste, where they have almost guaranteed sun in the dry season, but it’s not as bad as the general misconception.

We have so many different microclimates here. If one part of the Caribbean is raining, that doesn’t mean we’re raining.

At the same time, we don’t want to mislead our clients so we never guaranteed solid sunshine all the way. We tell people looking for guaranteed sunshine that perhaps we’re not the best destination for them.

What draws people to the Caribbean side of Costa Rica?

The southern Caribbean coast of Costa Rica – Puerto Viejo, Cahuita, and so on – is not for everyone. That’s what makes it special. I always say that we don’t do well with the “Disney set” over here.

The diversity here is unreal. You have a huge indigenous community, a huge afro-Caribbean community, lots of Panamanians and Nicaraguans, and then on top of that, expats from all over the world. It’s the most diverse tourist community I’ve seen in Costa Rica or Latin America.

It’s very integrated, too. Everyone feels at home here. I was nervous myself when I first arrived, wondering how I’d feel. But I’m very comfortable here after all these years.

What basic marketing advice would you give to others in the tourism business?

The most important thing is to offer value. Make sure your place is of good value.

On a trip back to Canada one time, I was in an Apple Store in Vancouver and got treated very well.

Afterward, I was filling out a customer service form. I don’t normally fill these things out but I wanted to make sure they recognized this particular server. So I gave everything 8/10 which classified me as a Very Satisfied Customer.

Anyway, a week later, Apple called me and asked if I had a moment to answer one question. They saw I was a Very Satisfied Customer and so asked me this: If there was one thing we could do to move you from Very Satisfied to Extremely Satisfied, what would that be?

That was a lightbulb moment for me. I was like, oh my god, that’s it!

That’s why Apple took over the computer market. So I took the concept back to Puerto Viejo with me. We dropped our own survey and just asked our clients two questions – first we ask them for a score out of five. Then if it’s less than a five, we ask them what one thing could we do to improve their stay?

And you’d be amazed at what people tell you. I mean, we don’t sleep in the rooms, so we don’t know. If there’s one way to deep dive into your customers, that’s how you do it.

You’ve managed to find and maintain great talent at your hotel. What’s your secret?

We’ve always found local people, even though they lack the education people in San Jose and the Central Valley have, are the best employees. Mainly because they stay.

But you have to train them. We have a high bar, but we also make sure that Banana Azul is a place where people want to work. We offer extra vacations, bonuses, parties and so on to keep people committed to being part of the team.

We also post all the reviews for everyone to read, which also promotes a sense of togetherness and pride among all the staff.

The other thing is, like I was saying earlier, our clientele are different. People who come to Puerto Viejo come here specifically.

They seek this place out, rather than finding some all-inclusive somewhere. They’re a different breed of clientele. And 95% of them are nice, decent people I’d sit down and have a drink with. So it’s easier to be nice and good at your job if you’re serving nice people.

If you went back to correct any errors what would be they be?

The first one, right off the bat, was that I was originally going to make Banana Azul an LGBT-exclusive hotel. Then I realized right away that wouldn’t work. It was too small a market and it would be difficult to attract such a small market to the Caribbean side.

So I decide to open it up to everyone and see who comes. Over the years we realized our best clients were couples, so we went adult-only. At the time we got criticism for that, as few hotels were doing it. But we persevered, and now we’re classified as one of Costa Rica’s best romantic hotels.

I want to go on the record and say that if Costa Rica approves a remote worker visa, it’ll be down to you. Are you seeing any demand for this?

Absolutely. We have a remote worker package on our site and people are buying them. That shocked me because they start at $3,000 a month. I wondered why people would do this if they could stay at an Airbnb or whatever.

And again, you don’t know anything about your clients. I love it when they shock me and prove me wrong, because it creates a whole new paradigm for me.

But you know, if you’re going to work remotely abroad, tell me somewhere better than Costa Rica to do it?

A look at the concept of remote working in Costa Rica and how it could be a major boost for tourism in a post-pandemic world.#remotework #remoteworking #CostaRica https://t.co/WYDIl0QohU

Any other post-pandemic changes/assumptions you have discovered in the last few months?

Well, as we just said, people seem to be looking for longer stays so we’re putting fridges in all the rooms.

We’re also seeing people don’t want to eat out every night in the restaurant, so we’re opening up a market in the hotel, like a mini-Whole Foods. Guests can buy take-out food and take it up to their rooms to eat in front of Netflix.

How do your old friends in Canada see that Costa Rica has changed you?

They see I’m happier now. How much more fulfilled I am. My friends and family were all nervous for me at the beginning, questioning what I was doing. But there’s no doubt this was the right thing for me, and they all see that now.

Costa Rica seems to fit some people like a glove and make them happy. Colin Brownlee is one of those people.

It was super-interesting getting his perspective on running a hotel in what is still off the beaten path in terms of Costa Rican tourism.

And I’m stoked about how his remote worker packages are working.

There’s no doubt in my mind, given the travel restrictions we’re living under, creating a space for people to stay longer and work will only be a success in the long run.

Thanks again to Colin for this chat and we’ll see you again soon for the next episode of Let’s Talk Tourism!

Casey Halloran is the co-founder and CEO of the Namu Travel Group. He lives in San Jose, Costa Rica with his wife and children.