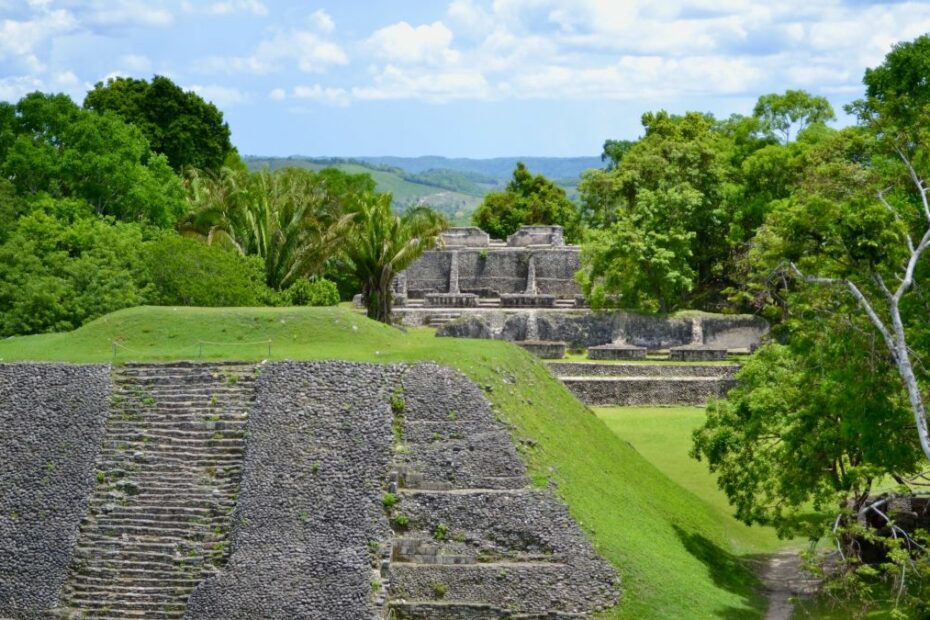 Up (too?) Close and Personal with Mayan Ruins in Belize

There are more Mayan ruins in Belize than you can shake a stick at. This tiny country is full of them. But many visitors might be shocked at how up close and personal you can get with them. Is this a good thing? This article contains a link (or links) to Amazon, from which, as an Amazon Associate, this website will earn a small commission if you make any purchases. Some other links are also affiliate links, where we will also make a small commission if you purchase anything after clicking, at no extra cost to you.

Here’s a fact for you. Archeologists have explored only a handful of the Mayan ruins in Belize.

And even more unbelievable is this nugget: Of the Mayan ruins in Belize we know about, the government protects virtually none of these sites in a reasonable manner.

“Preservation” seems like a foreign word and visitors can walk among the bones of ancient Mayans and pick up their pottery unrestricted.

With over 900 Mayan ruins discovered so far in Belize, I feel a little discouraged that the authorities do so little to preserve them.

A recent guided tour of the ATM Cave between Belmopan and San Ignacio in Cayo District presented a perfect example of this lack of preservation to me.

The full Mayan name for this cave is Actun Tunichil Muknal, one of the most famous archeological sites in Belize. We’ll call it the ATM Cave here to keep things simple.

Inside, guides allow guests to walk through broken pottery and human remains (skulls and bones). These have been in the cave for almost a thousand years.

In 2012 a visitor to the ATM Cave dropped his camera on top of a human skull, fracturing it. And then another guy also broke a skull when he stepped on it by accident.

From visiting the cave, I imagine these weren’t isolated incidents, but these two prompted a response from the authorities. Nowadays they don’t allow cameras in the cave without a permit and they require visitors to take off their boots before walking through.

It’s incredible they let you wander around this sacred and unique place unrestricted. Anywhere else would have ropes cordoning things off and armed guards protecting the treasures.

And then there’s the safety factor when visiting these ancient sites. Or to be more accurate the lack-of-safety factor.

At the Lamanai Mayan ruins in Orange Walk District, the guides encourage you to climb the High Temple, a magnificent structure dating from 625 AD.

Now don’t get me wrong, the spectacular views from the top of the High Temple of Lamanai make this climb one well worth doing.

But making it to the top requires a near-vertical 99-foot climb with only a rope to grab on to. It’s a great adventure but they don’t mention how fit you need to be. Neither do they mention how good a head for heights you need.

Again, elsewhere in the world, there’s no way in a million years anyone would allow this. I mean, the potential for lawsuits would make this a no-no.

Imagine the National Park Service in the US allowing anyone to climb up the side of the Washington Monument? An exaggeration, but you get my point.

Those who climb the High Temple of Lamanai – pretty much everyone – soon realize Belize is a country of zero safety concerns. We’re talking almost 100 feet of stone stairs (more like a ladder). No handrails or any safety equipment, aside from the rope I mentioned earlier. And then you have to get down again once you’re done at the top.

Am I being a spoilsport here? Am I projecting my own sanitized view of the world onto a poor country that can’t afford what we take for granted?

Isn’t it a good thing that visitors and tourists can get up close and personal with history rather than looking at it through glass or from the other side of fences like we’re used to at home?

I don’t know the answer to these questions. Part of me loves the devil-may-care freedom you find here in Belize. I love living without the regulations and rules and restrictions of the United States.

One argument, I guess, is if these places have survived so long already, a few tourists getting all over them won’t make too much difference.

Or maybe there are so many Mayan ruins in Belize, and potentially many more still waiting for discovery, that we can be lax with the ones we have?

I’m still unsure, though. Still not too comfortable with the whole thing. It amazes me more than anything. Is that a culture clash?

As visitors clamber around and up and over the various Mayan ruins in Belize, new sites still get discovered.

In 2016, workers found a new tomb at Xunantunich, one of Belize’s most well-known and popular sites.

While excavating a stairway at Xunantunich, the workers found a new tomb. In that tomb were human remains, animal skeletons, weapons, and pottery.

This newly discovered tomb dates back 1,300 years, to an era known as the Snake Dynasty. This is a period of Mayan history that archeologists and historians know very little about.

And I’m sure that soon people will climb in and trample all over this new tomb the same as everywhere else.