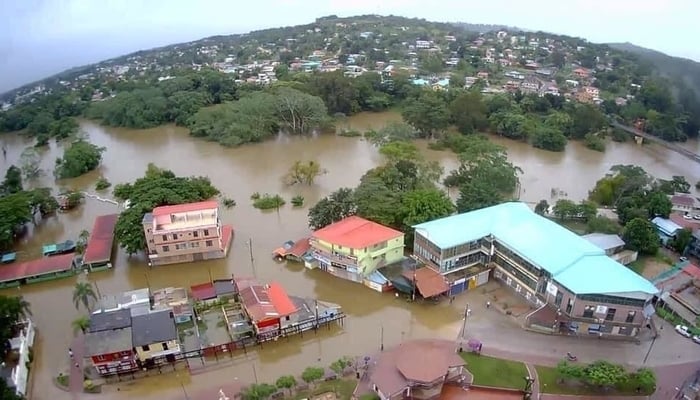 Hurricane Eta may have downgraded to a tropical depression after hitting Central America on Tuesday, but that doesn’t diminish the damage caused across all seven countries.

Eta left Central America this morning after causing massive destruction across the region. At time of writing, the storm is off the coast of Belize, on its way north. It might well reform into another tropical storm or potential hurricane to hit Cuba over the weekend or early next week.

Since the storm slammed into Nicaragua on Tuesday, it’s estimated that at least 100 people are dead. This could include 50 people in a Guatemala landslide, according to President Giammattei. It’s worth pointing out though, that right now, this figure is not confirmed.

Some conflicting info on the death toll from #Eta in Guatemala. This source saying 8 dead, others have said more than 50. Hope the lower number is the accurate one https://t.co/Uy3FHZziBj

Copeco, the Honduran disaster agency, estimates Eta has affected over 360,000 people in the country. Most of those affected live in northern Honduras and along the Caribbean coast, where Eta has destroyed bridges and cut off communities.

Fundraising has already began on social media, with individuals and organizations arranging GoFundMes and other efforts. Honduras is already reeling from the economic collapse and rising poverty from COVID-19. The damage from Eta is another kick in the teeth.

This video illustrates the severe flooding in the municipality of La Lima, 14km southeast of San Pedro Sula, in northwestern #Honduras. La Lima is home to more than 75,000 people as well as the country’s busiest international airport, now flooded and closed. #Eta https://t.co/AUs10VZT1a

Flooding is a major problem in Belize, with Cayo District hit particularly hard. Today, the Belizean Ministry of Health set out guidelines to warn about contaminated drinking water. Roads are closed all over Belize.

Outside of the mass flooding, no lives have been lost in Belize. But again, in a country with an economy ravaged by the pandemic, life is suddenly a lot harder for a lot of people.

In El Salvador, mass flooding in next-door Honduras means that water’s got to go somewhere. Much of the Rio Lempa watershed lies in Honduras, and that’s forcing El Salvador’s main river to swell. Evacuation orders are underway around the river as it begins to overflow.

The Ministry of the Environment in El Salvador says to expect heavy rains until Sunday.

Two countries well south of the storm are Costa Rica and Panama.

Both countries, however, have seen heavy rain, landslides, and flooding as a result of Eta. Two people died in a landslide in Costa Rica, and thousands have been put in shelters.

For its part, Panama has seen at least seven deaths so far, all in Chiriqui Province.

Landslides, falling trees, and flooding in Chiriqui and Bocas del Toro Provinces have also cut electricity for at least 4,000 people.

It’s going to take a while, at least until Eta is long gone from the coast from Belize, to access the full damage of this storm. In terms of lives lost, it’s nowhere near as bad as Mitch in 1998 or even Felix in 2007. That’s little consolation to the families of those who’ve died.

But in an already terrible year for Central America, when the Isthmus is already at its most vulnerable, Eta could not have picked a worse time to arrive.