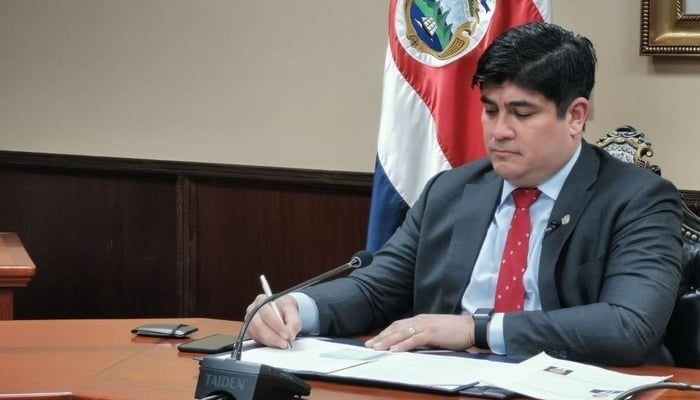 As Costa Rica President Carlos Alvarado backs down on his IMF tax hikes, we push back at recent assertations of dictatorship on social media.

This is the second time in the past few months I’ve written a piece defending the president of Costa Rica. I hope it doesn’t become a habit although it probably will because I like the guy. I admit it.

I think he’s mishandled the entire pandemic, but tell me a world leader who hasn’t? Especially in Latin America. Zero out of ten for them all.

But mishandling the COVID crisis does not make him a dictator.

And I’m tired of the constant claims of dictatorship in Costa Rica filling up social media these days. Especially from gringos who don’t know what they’re talking about when it comes to the history of this region.

It seems fashionable nowadays to label any politician you dislike or disagree with as a “dictator”. It comes from the USA, of course, where reasoned political dialogue went out the window years ago. Tragic to see it happening down here.

If Alvarado was a dictator, he wouldn’t have backed down last night on his foolish and ill-thought out proposal to the IMF. He would have rammed it through to get his hands on that cash.

What kind of dictator allows the protests and blockades we’ve seen these past days?

A real dictator would have already opened fire on them. Like Daniel Ortega did in April 2018 when citizens protested proposed fiscal reforms in Nicaragua. That protest provoked a storm of state-sponsored murder and terrorism that hasn’t abated to this day. That’s a real dictator for you right there.

Anyone who seriously knows anything about Central America would… could… never call Carlos Alvarado a dictator. Those who do insult the memories of all our dead, tortured, and imprisoned Nicaraguan neighbors.

As the crisis in Nicaragua escalates and the world looks away, Daniel Ortega conforms to the archetypical dictator stereotype of denial, just like Somoza, Ceaușescu, Gadaffi, and tyrants before him.https://t.co/F5O6jtWSxF#Nicaragua #SOSNicaragua

As I said, the recent IMF proposal was ill-thought out. It was lazy, and above all, cowardly. Cowardly in that it failed to address Costa Rica’s real problems.

But let’s look at why this administration took the coward’s way out here. In September 2018, Carlos Alvarado tried to cut public spending. He wanted to reign in bloated public payrolls and pensions in the public sector. It was one of his campaign promises. I remember watching the debates.

So it should have been no surprise that once taking office, Alvarado took on the public sector. The public sector came out with massive strikes, blockades, and protests in the way they’re wont to do in Costa Rica. Kind of like what we’re seeing now.

Alvarado ended up putting through a package of tax hikes that never cut public spending in the way he really wanted.

To that end, the public sector won a victory of sorts, although the government ended up passing a bill to make the type of strikes we saw in 2018 illegal. Hardly the actions of a communist (another term I’m seeing bandied around about Alvarado).

I’m sure it was his 2018 experience that influenced the latest packet of tax hikes in the recent IMF proposal. I imagine Alvarado didn’t have the stomach to go up against the the public sector unions again. Which makes him weak and ineffective, not a dictator.

But make no mistake. Any Costa Rican president serious about fiscal reform will have to, at some point, once and for all, go up against the public sector workers. And that will make him or her ever unpopular.

If you look at the unions now, even after Alvarado walked back his tax raises last night, they’re still striking, still blockading.

They know any viable alternative to raising taxes won’t be good for them.

They’re against salary/pension freezes. They’re against the selling off of public assets. Shrinking the public sector and cutting any form of public spending is an anathema to them. This is why they’re still blockading today.

The biggest paradox in Costa Rica is that while Ticos don’t want tax hikes, they equally don’t want the alternative. Proposals like selling off even the smallest assets generally poll badly in Costa Rica. Let alone meaningful ones like ICE or INS. This is what makes every president’s job impossible.

The medicine we need in Costa Rica is not one we’re prepared to take. It doesn’t matter which president is holding the spoon. Most Ticos will spit out any concoction that includes the real structural reform needed in this country.

What Costa Rica needs is a president who can explain to a population entitled by years of bloated public spending that it can’t go on like this.

Alvarado tried to be that guy two years ago. He failed and as a result, tried to kick the can down the road to whoever the next president might be in 2022.

Then COVID came and ruined that hope, forcing him to face all this again. But after 2018, I guess he doesn’t have the stomach for it. Hence the coward’s way out with the IMF proposal.

It’ll be interesting to see what happens now. I hope Alvarado can do what he said last night and put together a coalition of thinkers and activists from across the board to come up with a different plan. If he does, he still might go down in history as a good president.

But any plan that doesn’t cut public spending will fail as much as a plan based on raising taxes. He’s got a hell of a battle on his hands. The biggest battle of his turbulent presidency.

Anyone who loves Costa Rica should wish him luck, not accuse him of dictatorship.