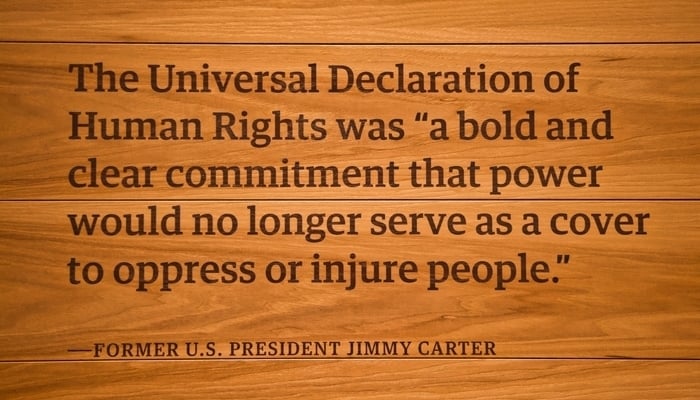 It’s December 10 so that means it’s Human Rights Day. To mark the occasion, we want to highlight the human rights progress we’ve seen in Central America this year. In a year marked by pandemic, lockdown, and civil unrest, it won’t always be easy. But we’ll try.

Happy Human Rights Day everyone! Yep, today’s the day where we celebrate the adoption of United Nations General Assembly Resolution 217A. That’s the Universal Declaration of Human Rights to you and me.

The UN adopted this resolution in Paris, France on December 10, 1948. The idea was, after the atrocities of World War II, to define and enshrine the basic, inalienable rights of all human beings, regardless of “nationality, place of residence, gender, national or ethnic origin, color, religion, language, or any other status“.

Without going too much into the weeds, the basic, inalienable rights of all humans being include the right to life itself, the right to equality, liberty, free speech, and security. All humans have the right to be free from slavery, discrimination, torture, and degrading treatment.

Human Rights Day 2020 is overshadowed by the COVID-19 pandemic and how governments around the world have reacted to it.

The theme for this year ‘s Human Rights Day is “Recover Better”, focusing on rebuilding the post-pandemic world by making human rights essential to the recovery. The idea is to think of this pandemic as a reset or our collective values.

The freedoms enshrined in the Universal Declaration of Human Rights remain as relevant as ever, and must be at the centre of efforts to recover better from the #COVID19 pandemic.

How’s all this working out in Central America?

It’s no secret Central America has an appalling human rights record. Poverty, inequality, war, crime, and corruption have overshadowed the region like a black cloud for decades.

One of the few countries to not sign the original 1948 Universal Declaration of Human Rights was, in fact, Honduras. Now it’s only fair to to say that Honduras didn’t officially abstain like South Africa, Saudi Arabia, and the Soviet Union. But they didn’t show up for signing the thing and that’s telling.

Protest outside of headquarters of the Investigative Police Directorate (DPI) in San Pedro Sula right now. Demanding answers & the whereabouts of the disappeared Garifuna. Individuals wearing DPI vests were involved in the disappearance of the men #Honduras pic.twitter.com/UQFqGvQCaB

It’s obvious there’s still a long way to go in Central America, one of the most unequal parts of the world. In each country this year, to some degree or another, the spirit of the 1948 declaration has been broken. I can think of at least seven failures (one for each country) right now:

Actually, it’s not fair to single out Belize for violence against women and anti-LGBT sentiment. The whole region suffers here. Domestic violence and femicide has risen all over the region, in part, no doubt due to lockdowns and the economic situation.

In short, Central America has a long way to go to achieve the UN goal of a better recovery from the COVID pandemic. We’re under no illusions about that.

But enough negativity. We’re trying to be positive and to talk about the here and now.

So let’s discuss some positive human rights stories in Central America this year. We said it won’t be too easy, but there are some.

The biggest positive story in the region this year must be about Costa Rica becoming the first country in Central America to legalize same sex marriage.

If this had happened any other year, it would be bigger news. But we all knew it was coming – in fact Carlos Alvarado won the 2018 election partly on the basis of his opponent being against same sex marriage. Ticos threw out his bigoted opinions in a landslide.

When the big day happened in May, Costa Rica was suffering under the yoke of COVID restrictions and economic collapse. So becoming the first Central American country to legalize same sex marriage didn’t generate the attention it should have.

Nonetheless, when Daritza Araya and Alexandra Quirós married a few minutes after midnight on May 26, human rights in Central America took a massive step forward.

Another positive, although less joyful story came out of Panama. It’s one of those that shouldn’t have been an issue in the first place, but was.

We mentioned above the discrimination against the LGBT community in Panama during the gender-based lockdown, where trans people in particular were harassed and abused while out and about.

The positive here – and I know I’m reaching – is that the Panamanian authorities actually acknowledged this was happening, and promised to stop it.

For the first time, the Panamanian government acknowledged that transgender people have rights like everyone else, and that Panama respects the “diversity of identity and expression”.

One could argue that the Panamanian government shouldn’t need to publicly make statements like this, that it should be a rule-of-thumb, clear to everyone. But this is Central America and life doesn’t work that way. It was a big step in Panama, and a welcome one.

Did it stop discrimination? No, not everywhere. But the intent was made. It’s a start.

Elsewhere in Central America, Belize saw a peaceful handover of power from 12 years of UDP power to a new PUP era in the November general election.

Unlike other Central American countries, Belize isn’t known for political violence or election rigging. Elections in Belize are fair for the most part. But any peaceful transition of power in this part of the world is a positive step for human rights.

And then there’s another less tangible victory for human rights in Central America to celebrate this year.

In a region decimated by poverty and despair in 2020, regular people have stepped up to help their neighbors. Many of these people have lost their own livelihoods but stepped up anyway.

People like Christi and Donatus in Guanacaste, Costa Rica who’ve spent the year feeding their community from their restaurant. Or Jim in Caye Caulker, Belize who’s been doing the same from his restaurant. We’ve received so many stories like this.

And stories people from all walks of life; fishermen, hoteliers, other occupations setting up food banks to feed people hit by the economic effects of the pandemic. Unsung heroes. People going out to feed stray animals and their homeless owners.

These people all over Central America sum up the best of this region. They’ve personified the spirit of the human rights declaration by following the golden rule of treating others as well as they can, with dignity and respect.

And if Central America “recovers better”, it’ll be because of people like this more than any government gestures.

I said earlier that this years human rights victories were few and far between. But that doesn’t make the victories that do exist any less powerful. Happy Human Rights Day, Central America.