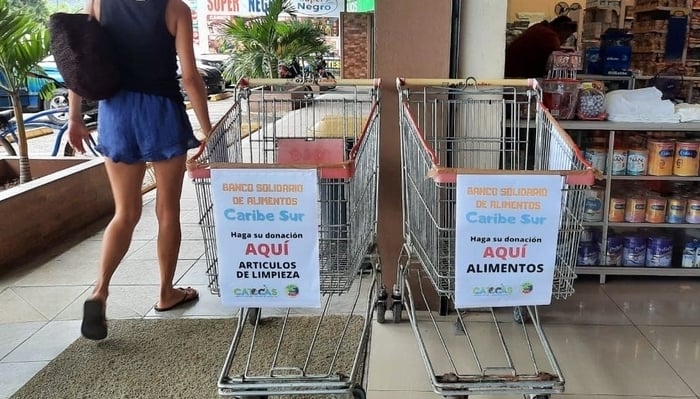 In a show of support towards the communities of Costa Rica‘s Southern Caribbean, the president of Costa Rica sent a video message to the Chamber of Tourism and Commerce of the South Caribbean (CATCCAS) and the Association of Integral Development of Puerto Viejo (ADIPV) thanking them for providing food and household supplies to families most affected by the COVID-19 pandemic.

“I received photos of the aid packages and distribution of relief assistance taking place in the South Caribbean, and to tell you the truth, I felt deeply moved and thankful for the helping hand you’re providing the people and families most in need,” said President Carlos Alvarado.

After the borders closed, CATCCAS and ADIPV joined forces to create a food bank for local residents hardest hit by the border closures.

CATCCAS president and manager of Puerto Viejo’s Hotel Banana Azul Roger Sans said, “It might not be COVID that kills people, but the lack of access to food and necessary supplies.”

“The idea was to gather non-perishable products and distribute them to people in need. We focused on people with specific challenges who were unable to access other government programs,” said Sans.

Talamanca has one of the lowest-ranking human-development indexes in Costa Rica. It’s one of the most diverse parts of Costa Rica with a large Afro-Caribbean and indigenous population.

“Where we live, people’s homes are often far apart and in areas without internet. There are lots of older people without much technological aptitude. This causes challenges for the residents. For these reasons, our mission is to not leave anyone behind,” said Sans.

Many families didn’t have the resources to prepare for an event such as COVID-19, nor finances to cope for long periods without work.

As soon as the lockdown started, Sans and the ADIPV’s Johnny Leon launched a social media campaign to identify those most in need.

This criteria includes single mothers, families with small children, the elderly, and the sick.

“Businesses and supermarkets let us place marked baskets at the entrance of their stores where people could leave products for donation. Once a week, we collect, disinfect, and inventory the supplies. Then we deliver them to families identified through our WhatsApp and social media surveys,” said Sans.

The packages consist of canned foods, beans, rice, oil, sugar, powdered milk, and cleaning supplies. Each will feed a family of up to five for seven to ten days.

Since the progam started, CATCCAS and ADIPV have delivered around 450 packages. They plan to reach an estimated 2,300 people across Talamanca.

Costa Rica is not a rich country and Talamanca is a poor canton.

It’s noteworthy that a population with so little will share what they have with the less fortunate community members.

Similar grassroots initiatives have assembled across the nation. Monteverde, Tamarindo, Nosara, Playa Hermosa and other places with economies dependent on tourism all have food banks set up. This is testimony of Costa Rica’s “family first” ethos, the “pura vida” spirit of the country.

“We must unite as a community to move forward. So that soon, we will share Talamanca the South Caribbean with the world again,” said Sans.

Krystal Hartman is a freelance writer who lives and works in Costa Rica. She specializes in tourism, sustainable economic development, humanitarian assistance, culture, and the arts.