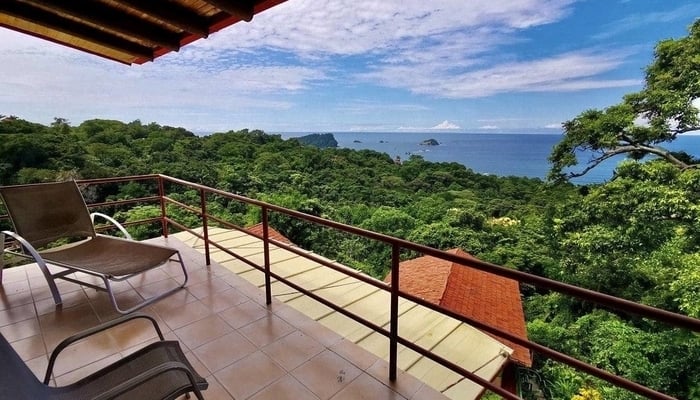 Let’s Talk Tourism is a series of videos from Namu Travel Group founder and CEO Casey Halloran. In the series, Casey talks to movers, shakers, and experts in Costa Rican (and Central American) tourism. His goal is determine the state of the industry during the current pandemic and beyond. In his latest episode, he talks to Jim Damalas, founder of Greentique Hotels.

Greentique Hotels is one of my favorite brands in Costa Rica. They epitomize the the idea of sustainable hospitality that makes Costa Rica tourism so special.

Jim Damalas is an ex-Hollywood documentary and commercial maker who fell in love with Costa Rica and flipped his life around to create hotels that blend into nature. Over 25 years later, he’s built three of them; Si Como No, Villa Blanca Cloudforest Hotel, and Santa Juana Lodge.

He’s a pioneer in sustainability and social responsibility in tourism and it’s a pleasure to chat to him. Here are the highlights of our conversation. We’ve outlined the essence of what we were talking about rather than providing an exact transcription. To see the whole thing, please watch the video below:

How long have you been here and how did you get into tourism?

It was an accident. I came here many years ago as a tourist with a backpack to check out places that hadn’t even become national parks yet. And I just fell in love with Costa Rica. So 25 years ago I came back with a crazy idea to design a concept of hotels that would be in harmony with nature. There was no real plan to it, just an idea.

So we started Si Como No in Manuel Antonio as a place with four little rooms. Over the years, that’s grown into a mid-sized resort.

The idea of Si Como NO was to build something that blended in with nature, on a property where I didn’t touch any trees or come in with bulldozers. I wanted to design something that backed into the existing biodiversity and it worked. Still to this day there’s more monkeys than guests! I’m happy to say we’ve kept on with our commitment and mission to sustainable hospitality all these years.

What year did you break ground at Si Como No?

In 1993. We had two young architects that were starting out with us. They thought I was crazy, because I wanted to design everything for airflow and solar insulation. I also didn’t want to touch any of the trees affected by the foundations. We were doing a lot of things that were new for Costa Rica. I also big on earthquake safety so I wanted something that could withstand the tremors we get here.

So what’s changed the most about Costa Rica and Costa Rica tourism in the 30-odd years you’ve been here?

Accessibility. Twenty-five/thirty years ago you needed an extra spare tire in the back to get to Manuel Antonio. We called it the hueco-pista. Getting around Costa Rica was for adventurers. You had to figure out where the next gas station might be, you had to plan on at least changing one tire along the way. It was truly an adventure.

Since then, infrastructure has improved immeasurably. We’ve made significant improvement to the roads and many parts of the country are easy to access. That’s a challenge to us, because our idea at Greentique is less is more.

But in a country the size of West Virginia, we have around 35,000 hotel rooms. At least 90% of the hotels in Costa Rica are boutique, with less than 40 rooms. So I think we’re still on the same mission I discovered in the 90s, which was about tourism not conflicting with nature, but rather complimenting it. As a country, I think we’ve done that, so far.

How did the Santa Juana concept come about?

Well, I’ve always had an interest in rural tourism. I believe the caretakers of Costa Rica’s biodiversity are the people who live closest to nature.

I went up to Santa Juana, in the mountains above Manuel Antonio, to build a little house for myself to relax in at the weekends. Once up there, though, I realized the village and its culture was disappearing, and that made me want to help out.

By disappearing, I mean that people were leaving. The young all left to work on construction or tourism projects in Quepos/Manuel Antonio, and the place was dying out. No-one was staying around to work in agriculture like their parents or grandparents did.

So the first thing we did was create a little tour from Si Como No, and then four years ago, we built Santa Juana Lodge. All the staff come from the community of Santa Juana, and they run the whole thing.

The community took ownership of Santa Juana Lodge two years ago. Since then it’s consistently #1 on TripAdvisor for lodges in Costa Rica’s Central Pacific region.

This kind of community-based tourism is a growing trend around the world. It also supports the conservation-driven tourism Costa Rica is already famous for.

You’re one of the most community-driven hoteliers I know. Tell me about some of the projects you’re involved with. What is tourism’s responsibility?

The Greentique mantra is “travel well, travel right”. We encourage travelers to come to Costa Rica and do something positive for the country they’re enjoying.

We’ve also been conserving wildlife corridors in Manuel Antonio and Quepos for 20 years, and more recently have become involved in the Corcovado Foundation in the Osa Peninsula.

Our role here focuses on educating kids to share with their parents the importance of conserving rural culture. Local conversation efforts bring tourism to rural Costa Rica. That allows local people to work and start their own businesses.

Once you get a community into conservation and respect sustainable practices, that community benefits.

From Greentique’s point of view, we’ve found that encouraging this type of community-led tourism leads to amazing feedback from our guests. When you read the reviews, we see that for our guests, it’s not about thread count on the pillow or the reputation of the chef. Our guests look forward to making a difference when they come to Costa Rica. That’s the Greentique story.

Again, when I went up to Santa Juana and saw all the youth gone, we started a tour up there and hiring the locals. That gave them income, health insurance, and security. They became owners of the idea of community-based, sustainable tourism in their village.

So I’m very proud of that, by using the mission of Greentique, we turned around a community that was disappearing, like so many others have in Costa Rica and around the world.

Now they’re the caretakers. People in Santa Juana have stopped hunting, there’s no more deforestation, the steams are pure again, and the animals have come back. This is how I hope the whole country will go, which is what guests are looking for, which in turn encourages more development.

A post shared by Fundación Corcovado (@fundacioncorcovado) on Sep 9, 2020 at 3:47pm PDT

We had that slow food farm-to-table movement a few years ago. Do you think there’ll be a post-pandemic rethink on slow tourism?

We’re involved in a movement to create an institute for sustainability. It’ll be at Villa Blanca, and we’ll welcome people who want to come and study the concept of wellness through diet.

Costa Rica has twelve micro-climates and such a variety of food products. If you want to create an amazing menu all you need to do is find a local farm where they’re growing amazing products. Many of them are organic, which is a growing trend here.

I believe Costa Rica is in a perfect position to host people from around the world with a diet that supports wellness practices. I mean we’re in a blue zone, after all!

Costa Rica has a history of sustainable practices and not much mass-farming, so we’re on the right track.

What does Costa Rica need to do to avoid becoming another “Cancun-type” destination?

It’s important Costa Rica continues developing zoning practices on a local level. Here in Manuel Antonio, there’s no master plan to control development. And this is where the most famous national park in the country is!

But at the same time, someone could come and put up some Cancun-style towers if they wanted, in an area designed for minimal traffic. Meanwhile hoteliers like me and others have been conscious about building in the most sustainable way to protect the fragile environment and ecosystem.

Local municipalities need to get serious about zoning to stop the prospect of that happening. We need municipalities to develop zoning practices in harmony with the biodiversity, which is Costa Rica’s number one attraction in the first place.

Is there a Greentique human story you’re proud of?

There’s quite a few and I don’t want to leave any out. For a start, there’s Hugo Arias. He was my driver when I first came to Manuel Antonio when I didn’t know where I was going when I started Si Como No. Now he’s part of the municipality here and has his own transportation company. He’s also a big conservationist.

The original manager of Rico Tico, my first restaurant, now has his own successful restaurant. Another gentlemen who was my best waiter now has his own restaurant down at the beach. I could go on and on, but these are examples of encouraging local growth.

We definitely have an alumni at Greentique. We’re a family of properties with one thing in common – mutual respect. And we always believe our employees are as important as our guests. As such, when we talk about the magic of nature, we’re also taking about the amazing good nature of our staff.

The DNA of Costa Rica has to do with pura vida. That’s not something we created as a campaign to sell the country. It goes back generations to when Pepe Figueres abolished the army and put together an education and health program that reflects the pride in human rights you see here.

Costa Ricans are positive people, and customers in the hotels see that. I can’t train that at all. I can’t teach you to be positive, friendly, happy. But Ticos tend to have that inside them, they have a pride in their country that shines through.

That segues perfectly into my final question. What does pura vida mean to you?

I think it means sincerity. It means I’m not faking it. I believe in the pride I have for Costa Rica and my community.

We’re not perfect, but Costa Ricans believe in mutual respect. You’ll see it in the COVID pandemic. Costa Ricans think its patriotic to where a mask. They’re protecting their families, their neighbors, and communities.

We have challenges, but we’re doing a pretty good job seeing as the whole world has the same pandemic issues.

But I believe when we reopen properly, people will come here looking forward to the fact that Costa Rica practices what it preaches.

So that’s a wrap with Jim Damalas.

His emphasis on making tourism a community venture to help local people is super refreshing.

I’m also seeing the same positivity shine through from him as I have with other tourism people. How he believes Costa Rica will come out better from this pandemic, primed to embrace whatever the new normal of tourism there is to come. It’s like Costa Rica’s been practicing already.

See you soon for the next episode of Let’s Talk Tourism!

Casey Halloran is the co-founder and CEO of the Namu Travel Group. He lives in San Jose, Costa Rica with his wife and children.