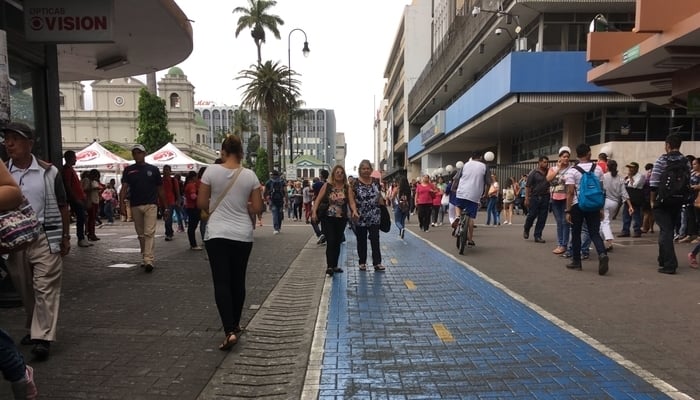 Alan Prendergast compares his personal experiences of the San Jose, Costa Rica cost of living to four European cities (Amsterdam, Edinburgh, Galway, and Madrid) for eating out and drinking.

I recently arrived back to Costa Rica after a couple of weeks in Europe.

It was a reminiscence trip for me, as we went to Amsterdam, Edinburgh, Galway (Ireland), and Madrid. All the places I visited or lived in before moving to Central America. I was curious to see how much these great cities have changed since my last visit.

As someone who ekes out a living through cooking/baking, I have a rather limited budget. This made me nervous about burning through my savings over there. But I wanted to see how Costa Rica compares to these cities cost-wise, in terms of transportation, food, and alcohol.

I won’t lie, I find certain things in Costa Rica to be very overpriced, especially compared to its Central American neighbors.

A post shared by Central America Living (@centralamericaliving) on Nov 1, 2019 at 9:18am PDT

Airports are not a great indicator of what to expect in any country.

Being fleeced for fast food or beer is the norm at any airport in the world. But the pricing at San Jose airport (SJO) is outrageous.

I expect the renovations over the past years has something to do with this, but even so, $7.50 for a local beer is excessive.

Especially when you compare that with the $1.40 or $2.50 you pay for the same beer for in supermarkets or bars. This came into sharper focus when we arrived in Madrid for our nine-hour layover. There, at Barajas International Airport, we could enjoy a 500ml Mahou for only four bucks.

Due to our schedule, we didn’t get to compare prices at Schipol Airport in Amsterdam, but in Dublin Airport a pint is around $5.50.

That still works out cheaper than Costa Rica.

Apart from staying with family in Ireland, we used Airbnb throughout the trip.

In Amsterdam, we shared a tiny bedroom with no access to a kitchen, TV and a shared bathroom. We paid $120 a night for the privilege. On our budget, the alternative was staying in a hostel which was a non-starter for me. Hotels in the city center are very expensive.

We were a 15-minute walk from downtown which was fine for us. There was a great bar beside the apartment which offered by far the best tasting (and best-priced) food we ate. In general, everything in Amsterdam seems expensive. A pint of beer starts at around $5.75 and up.

Eating out was also pricey in Amsterdam. A half-decent lunch costs no less than $14 a head, not including beverages. This works out only a little bit more expensive than San Jose, Costa Rica.

Probably one of the most instagrammable spots of Amsterdam! ? . Photo by: @n0ramaria ? . ❌❌❌ . #amsterdam#theprettycities#agameoftones#netherlands#europe#igersamsterdam#iamsterdam#ilovethiscity#iloveholland#holland#beautifuldestinations#amterdamworld##amsterdamlife#amsterdamcity#amsterdamlove#amsterdamview#amsterdameffect#gametimeadam#canals#amsterdam2019#amsterdamhouse#livinginamsterdam#2019

Our next stop was the sunny city of Edinburgh, Scotland, situated 55.95° north of the equator.

Having lived there for a time in the 90s, I have a lot of happy memories of this beautiful old city. But I didn’t remember the weather being so bad. I realize that it’s January, the bleakest month of the year in Scotland, but still!

Despite the torrid conditions, the beauty of Edinburgh charmed my Costa Rican girlfriend. In spite of never seeing the sun while there, she questioned why I left in the first place.

For sure, there have been big changes since I lived there. The tram system is a new addition to the city, as are the many high-rise buildings on the west side of town.

It is also much more expensive than I remember.

In comparison to Amsterdam, though, Edinburgh was a welcome relief.

We met several old friends who have gotten into craft beers and single malt whiskeys. A round of eight of these hipster beverages cost about $60 ($7.50 a drink) which is about the same as you’d expect to pay in Costa Rica for the same thing.

But in Edinburgh, these were pints (568ml, 19oz). Much more craft beer than the (354ml, 12oz) bottles you buy in Costa Rica. So, as amazing as it seems, I found Edinburgh, Scotland cheaper than San Jose, Costa Rica for drinking.

At a fantastic Japanese style Karaoke bar we visited, they had a promotion of 12 bottles of beer and 2 bottles of wine for $74, or about $3 a drink. That’s much cheaper than San Jose.

Eating out was a joyful experience.

We ate at two of the best restaurants in the city during our stay and the quality was fantastic and well-priced. The first night was a steak and seafood affair where one of the ladies received a 2lb lobster for $30. Enormous fresh-grown steaks were around $20 per head. One night we opted for a rooftop Thai affair that boasted beautiful views of the city and Forth Bridge. Again the quality was top drawer.

Considering the amount of wine and fancy gin consumed, I felt the bill of $470 including 20 percent tip for eight people was somewhat of a bargain.

We were sad to say goodbye and look forward to going back again.

Then over to Galway for a few days, on Ireland’s west coast. A small, bohemian city with a long history of the arts, exciting nightlife and a growing reputation for great seafood.

Apart from the ridiculous cost of accommodation, transport, and utilities, the cost of living in Galway is quite reasonable.

A one-way 10km bus journey from the suburbs to the city center is a cool $5. There doesn’t seem to be any kind of tourist ticket you can buy with reduced costs for multiple journeys. The same taxi ride will set you back at least $23.

Eating out can be an expensive affair if you elect for one of the two Michelin star restaurants.

We decided to visit a renowned seafood restaurant way out in the country, famed for its fresh oysters. A meal for four including starters, main course, three desserts and one drink each came to $184. That’s $46 each, not a million miles away from similar standards of restaurants in San Jose.

From here we headed to Madrid, Spain for our final 2 nights.

Unfortunately, the rain that followed us across Europe was waiting for us here as well. This meant that we didn’t get out too far from our beautiful apartment.

In the time we had, I found Madrid to be a very reasonably-priced city.

A coffee and sandwich of Iberian ham and cheese were around $4.60. Coffee on its own was as little as $1. We tried tapas at one of the highest-rated taperias in the city. A couple of beers and four different options was $35 for the two of us. And the portions were large enough that we didn’t need to eat for the rest of the day.

Drinking in bars was also a pleasant experience in Madrid. At $2.88 for a glass or $4 for a pint of beer, we couldn’t argue with the prices.

And there’s the added bonus of delicious little bocas with each round.

Except for Amsterdam, the San Jose, Costa Rica cost of living is as, if not more expensive than the cities we visited when it comes to eating out and drinking.

For these factors, I’d say Madrid was the cheapest, followed by Edinburgh, then San Jose. Amsterdam is the most expensive.

But eating out in restaurants and drinking in bars isn’t the whole story. If you’re a tourist, these activities might take up a bunch of your time, but not so much if you live in any of these cities.

For example, out of Madrid, San Jose, Amsterdam, and Galway, rents are far cheaper in San Jose. For tourists, hotels, hostels, and AirBnBs are all a lot less expensive in San Jose, too.

This mitigates much of the other expenses in Costa Rica, although it often won’t feel like that when you’re paying through the nose for a piece of cheese.

It’s also worth pointing out that wages are far less in Costa Rica than in Spain, the Netherlands, Scotland, and Ireland. The fact that San Jose compares at all, price-wise, to any of them is obscene. I find it hard to live in Costa Rica myself on what I earn, so I don’t know how someone earning less than $1,000 a month copes.

We’ll be following up in the coming weeks with some more in-depth pieces on both Costa Rica cost of living and those elsewhere in Central America. It’s important to get a good idea of these things, whether living or traveling in this part of the world.

In the meantime, we hope this rapid, boots-on-the-ground comparison between San Jose, Costa Rica, and four European cities will offer at least a small eye-opener for you.

Let us know how San Jose compares with your city!